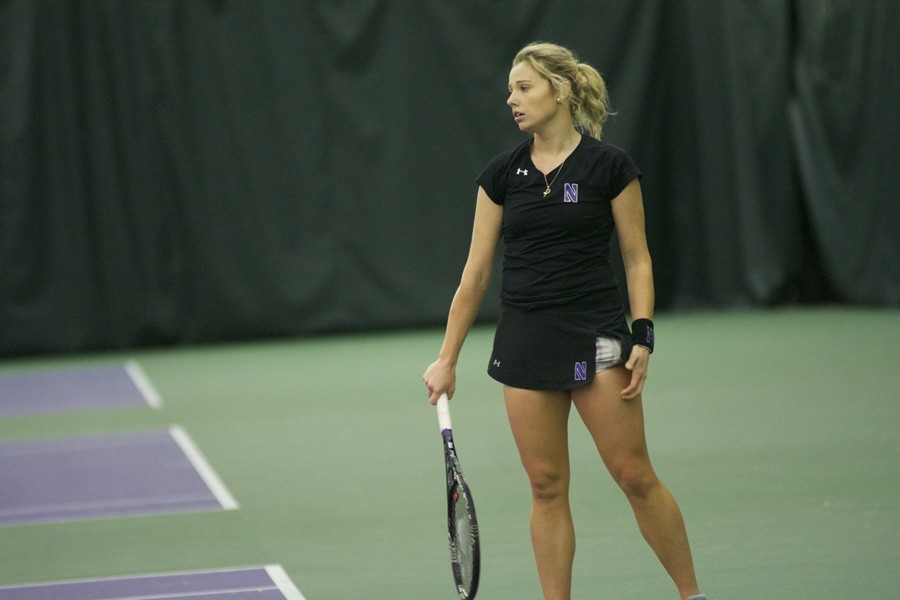 Alex Chatt looks across the net at her opponent. The sophomore won her doubles match against Arizona State, but dropped both her singles matches over the weekend.

Northwestern missed the mark this weekend for the Intercollegiate Tennis Association Indoor Championships for the second consecutive year.

First on Saturday, the No. 26 Wildcats took on No. 27 Arizona State in a rematch of last year’s first round of the qualifying rounds. Last year, the then-No. 32 Sun Devils claimed victory 4-3.

This year proved a different story. NU came up with a solid victory 4-2 with the clinching point coming from junior Brooke Rischbieth.

“It was really exciting,” Rischbieth said. “I was keeping an eye out on the other courts. (Junior Manon Peri) did an amazing job of keeping the girl out there. That really helped my confidence as well. We were really proud and really happy to get the win.”

Rischbieth claimed a straight set victory 6-4, 7-6 on the No. 6 singles court. The win marked the first of the 2015-16 season for the Cats. At the top of the match, NU took the doubles point over Arizona State behind the duos of senior Alicia Barnett with sophomore Erin Larner and Peri with freshman Lee Or.

That margin of error cost the Cats in their loss to host No. 11 Oklahoma State. The Cowgirls had just come off a victory of No. 32 Notre Dame and were looking to hold their ground on their home courts.

Oklahoma State did just that by shutting out NU 4-0. On the doubles courts, the Cowgirls made quick work of the Cats on the No. 2 and No. 3 courts winning over the Barnett/Larner and Peri/Or duos 6-1, 6-3. At No. 1 though, sophomores Maddie Lipp and Alex Chatt took control with a 6-2 win.

The scoreboard only tells part of the story though.

“4-0 doesn’t really do the team justice,” Pollard said. “We competed better than that. Doubles … we never really got going. We were right in there. Give them credit, they were a little bit better than us, a little sharper than us in doubles. In singles, … we’ve got to play a little better at the bottom, we all know that.”

On the singles courts, the story did not change much with the main difference being the score differentials. NU fell in all straight-set matches at Nos. 4, 5 and 6. As the match ended, Larner was the closest to a singles victory, leading her opponent 6-2, 5-4.

As the team prepares for No. 16 Duke next weekend, the Cats will have to focus on improvement from the qualifiers and knowing they can compete with top-20 teams as evidenced by their Wildcat Duals victory over No. 15 Alabama.

“Duke next weekend is a really good opportunity for us,” Larner said. “They have a high level of talent. (Sunday) we saw we could hang right in there with the high level opponent. We’re excited to play next weekend and get another win under our belts.”