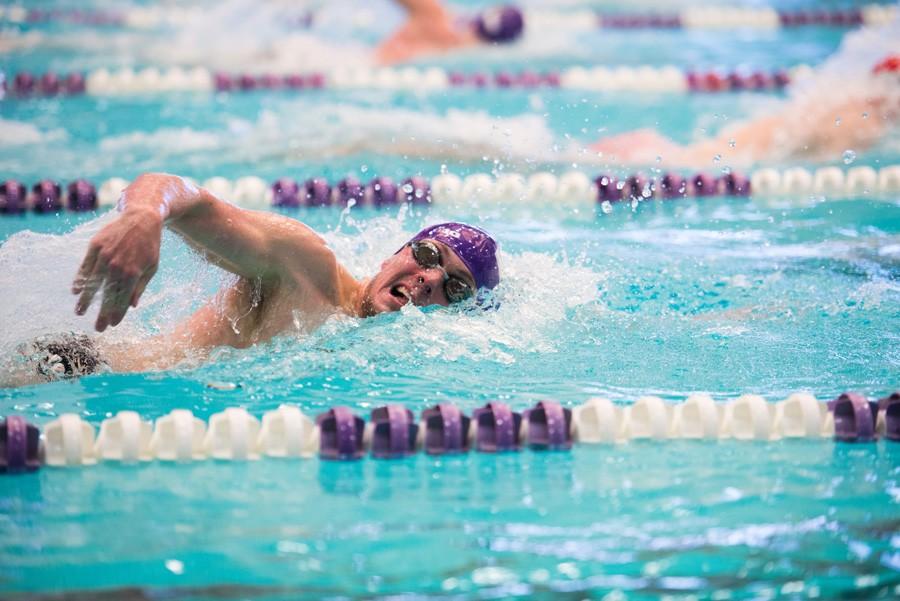 Stephen Shull races in the freestyle. The junior struggled in the team’s loss to Iowa on Saturday, finishing seventh and sixth in his two races.

Northwestern simply couldn’t handle a more experienced Iowa team this weekend as it fell to the visiting Hawkeyes.

The Wildcats’ lost 174.5-125.5 as their swimmers and divers won only 6-of-16 events. In addition, NU was unable to capitalize on any of those races either as Iowa took second and third in all but one of the events the Cats won.

Despite the lopsided score, coach Jarod Schroeder said the meet was still a strong showing for NU.

“In terms of performance, I’m not sure we could have (swam) better than we did as a team,” he said. “We finished our races off better than last week (against Notre Dame).”

Schroeder noted the 400 yard freestyle relay in particular was an event where the Cats were edged out in what he called a “heartbreaker.” The race saw Iowa’s A team barely edged out NU’s team by 0.25 seconds.

The Cats could have won that race, however. Schroeder said he has yet to put together a relay composed of the four fastest swimmers on the team, and a couple of the swimmers on the B team for the 400 freestyle relay Saturday swam faster splits than their counterparts on the A team.

“Had we switched them out we would’ve won that relay,” Schroeder said. “For the 400 free relay there were some guys on the B team who didn’t swim the individual 100 free, so a lot of those calls are unknown. That’s why we race in the dual meet season.”

Looking forward, the Cats’ massive freshman class that carried the team through much of Saturday’s competition will need to continue to pull its weight if the team wants to be ready for Big Tens. Carter Page won the 500 and 1000 yard freestyles for the second meet in a row, and Anthony Marcantonio won the 200 yard freestyle and the 200 yard Individual Medley.

Page, who was awarded his second Big Ten Freshman of the Week honor last week, was simply in better shape than his competitors. In the 1000, he swam neck and neck with Iowa’s Chris Dawson for the first 500 yards. After the halfway mark, Page stepped it up a notch and Dawson fell off the back end.  By the time Page passed 850 yards his closest competitor was nearly a full length of the pool behind him.

Marcantonio’s victory in the 200 yard freestyle came in a thrilling race. He had built a small lead over his nearest opponent going into the final lap of the race, but the outcome was far from clear.

Marcantonio managed to edge his competition with a powerful kick, and nearly jumped out of the water when he saw his time of 1:39.28 on the scoreboard. After setting a personal record last weekend against Notre Dame, he had managed to raise the bar again, dropping nearly another quarter of a second from his best time for the distance.

“I’m in a terrific spot right now, with the speed I’ve been feeling in practice and meets,” he said. “It’ll all turn out in my races at Big Tens.”