Men’s Tennis: Northwestern looks to prove itself at ITA kickoffs 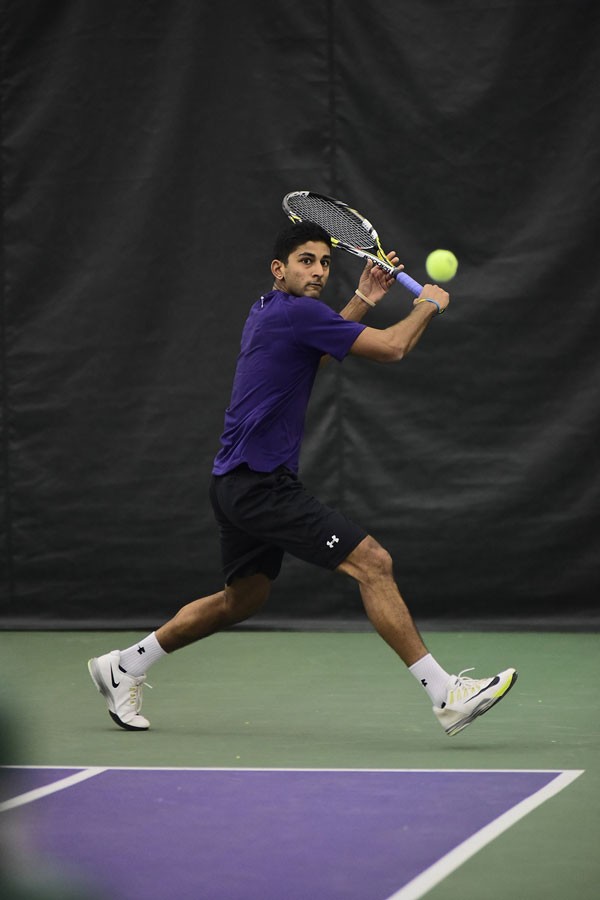 Mihir Kumar returns his opponent’s shot. The senior will play a big part in the Wildcats’s upcoming matches this weekend when they face multiple elite schools.

Northwestern will have a chance to qualify for the prestigious ITA National Indoor Championships this weekend with two wins over top teams.

The No. 25 Wildcats (2-0) will start in a four team grouping with a match against No. 24 Tulsa, who is fresh off a 4-3 victory over No. 27 California. If NU wins its first match on Friday, it will then play the winner of No. 7 Illinois and No. 36 Notre Dame the next day.

A loss will put the Cats in the third place match against the loser of Illinois-Notre Dame. Illinois is the group’s top seed and will be hosting by virtue of its top-15 ranking.

Junior Strong Kirchheimer said the team is expecting a stiff challenge this weekend.

“Every team at the kickoff is pretty good, so we’ll have our back to the wall, but we’ll see what we can do,” Kirchheimer said. “We’re a good team as well and everyone else there is good, so hopefully we can get it done.”

NU certainly has reason to believe it can beat any of the country’s top teams after a resounding 4-0 victory in the season opener over then-No. 36 Louisville on the road last Sunday. The Cats followed up that match with another 4-0 win later in the day over Chicago State.

Freshman Ben Vandixhorn found himself in the starting lineup in both matches and was excited to earn victories in both of them.

“It was fun, everyone had a really good energy,” Vandixhorn said. “It was really nice to get the first win.”

Coach Arvid Swan said he expects the lineup to move around going forward, but with the success Vandixhorn has had, Swan said the freshman has the opportunity to develop into a strong option at the bottom of a lineup that is otherwise stocked with upperclassmen.

NU’s experience will certainly be helpful in the National Indoors, a tournament in which 60 of the nation’s top teams compete in 15 four-team groupings, with the winners of each group earning a trip to the National Indoor Championships hosted by last year’s NCAA champion, Virginia.

Advancing would be a big step forward for the Cats, who finished second in their group last year behind Oklahoma. Getting to Charlottesville would give NU more key experience in big matches as they prepare for the grind of the Big Ten season, where three other teams have top-25 rankings.

This weekend, however, will not be the last time the Cats will face off against the nation’s best outside of their conference. Friday will mark the beginning of an incredibly tough, month-long, nine-match stretch for NU, during which the team is not scheduled to play a team currently outside of the top-60.

Still, the Cats are looking forward to proving themselves as an elite team with a winning performance this weekend.

“It’s a good opportunity,” Swan said. “Winner of the pod gets into national indoors, which is a pretty good thing, so hopefully we’re ready to go.”