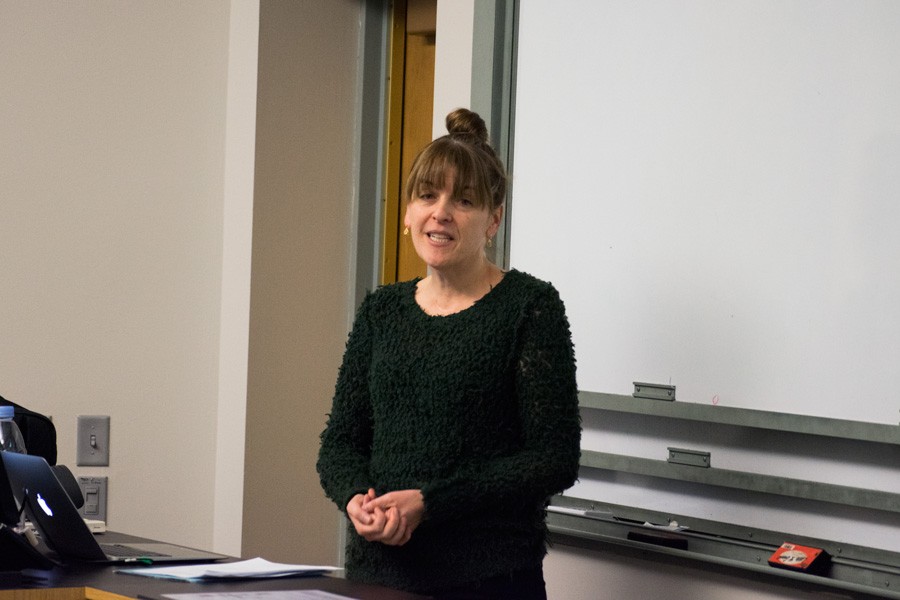 Author Mary Barr discusses her book on inequality in Evanston at University Hall. Barr said she was inspired to write her book after finding a childhood photo of her with a diverse group of friends.

It was a photo of close friends that inspired Mary Barr to write a book about civil rights in Evanston, the author said during a talk Wednesday.

Barr’s 2014 book, “Friends Disappear: The Battle for Racial Equality in Evanston,” offers a critical examination of race and class in the city during the 1960s and 70s. Upon discovering a childhood photograph of herself with a diverse group of close friends in Evanston, Barr decided to delve deeper into the city’s history of civil rights, she said.

“I was taught my whole life that (Evanston) was an ideal place,” Barr said. “Ideal because of the public schools … the beautiful homes … the stunning lakefront, but ideal in particular because of what people imagined as perfect integration.”

However, despite the seeming diversity of the photograph, Barr said she found Evanston was far from a bastion of integration.

Barr spoke to nearly 30 Northwestern students and Evanston residents about her book in University Hall. The event was hosted by Education Discuss Unite, a student group dedicated to promoting dialogue about education policy and reform.

Most discussion regarding the civil rights movement surrounds the American South, but Barr emphasized how the movement was not so limited. Her book expounds on the complexities of integration, even in areas like Evanston that were perceived to be more peaceful.

The book is largely focused on “recovering that history,” Barr said. She said she spent about a decade digging through archives and interviewing Evanston residents — including her own friends from the photograph — to better understand the integration of city schools during that era.

“Looking back 35 years later, it’s very easy for me to see the cumulative effects of segregation on our lives,” Barr said.

Many of her black friends, who may have been desegregated but not fully integrated, never finished school, lived in poverty or had died, she said.

Elena Dennis, president of EDU said it is helpful to inform people about these issues since they may not know they existed in the first place.

“(I) was really excited about this just so people can learn a little bit more about Evanston, because I think a lot of Northwestern students struggle to figure out how to engage with (the city),” the Weinberg senior said.

Evanston resident Sophie Degener, a former public school teacher, brought up education reform aimed at closing the racial and economic gaps that continue to take place in the city. Parents dissented about the reforms when they first started a couple of years ago, but research seems to show they are working successfully, Degener said.

Barr described her book as “a labor of love,” as it examines where she came from and how it shaped her and her friends today. It recovers a lost history, but there is still much more to be studied, she said.

“This is just the beginning, and I hope people build on the work that I started,” Barr said.