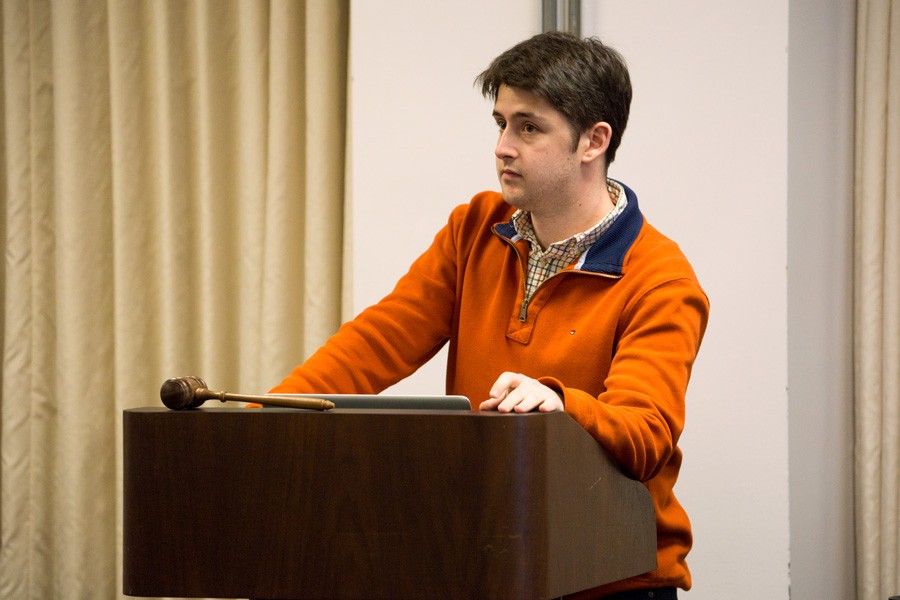 ASG Speaker of the Senate Matt Clarkston listens to dialogue among senators at Wednesday’s Senate meeting. A resolution supporting an Asian-American studies major was introduced and will be voted on next week.

A resolution introduced by Northwestern’s Associated Student Government on Wednesday expressed support for the creation of an Asian-American studies major.

The resolution said the major could “uncover histories and narratives that would otherwise be hidden” and possibly lead to innovation in academia. The resolution was authored by Kevin Luong, a senator who represents four Asian identity-based groups, and Erik Baker, a senator who represents four sexual health and assault-related groups. Luong, a Weinberg senior, had also authored a petition calling for the addition of the major in October 2015.

Weinberg faculty submitted a proposal for the major at a faculty meeting Jan. 13. The proposal will be voted on in late February. The faculty proposal came 20 years after the 1995 hunger strike, which started with students who were frustrated with administrational inaction following a student proposal for an Asian-American studies program.

“Kevin and I talked to the new Weinberg dean, and we got very positive feedback from him,” Ohashi told The Daily. “He seemed pretty confident that (the Asian-American studies major) was going to happen and was happy to meet the demands of student need … (We’re) just happy to see progress and happy to support whenever we can.”

ASG will vote on the resolution at the Senate meeting next week.

ASG also passed amended legislation to change guidelines regarding B-status funding. Kenny Mok, vice president for B-status finances, said the changes will increase accountability and communication between ASG and B-status groups by allowing automatic rollbacks of unused funding and the loss of B-status if groups do not respond to five consecutive emails.

“These are to hold student groups accountable for communicating with us in a reasonable amount of time,” Mok said, “and also for us to hold ourselves accountable to communicate with the groups.”

ASG code changes were also introduced to make former necessary actions recommended, like taking attendance at caucus meetings. Parliamentarian Scott Spicer explained the changes to the code and a change to a rules committee policy that required the language of resolutions to be more factual. Spicer said that legislation needed to use facts to back up beliefs and to use conditional phrases rather than absolutes.

“There’s a lot of places in the code where what we do doesn’t actually match up to the code,” Spicer said. “This entire code review is our way of aligning that and making that actually come true so that what the code says, we’re actually doing.”