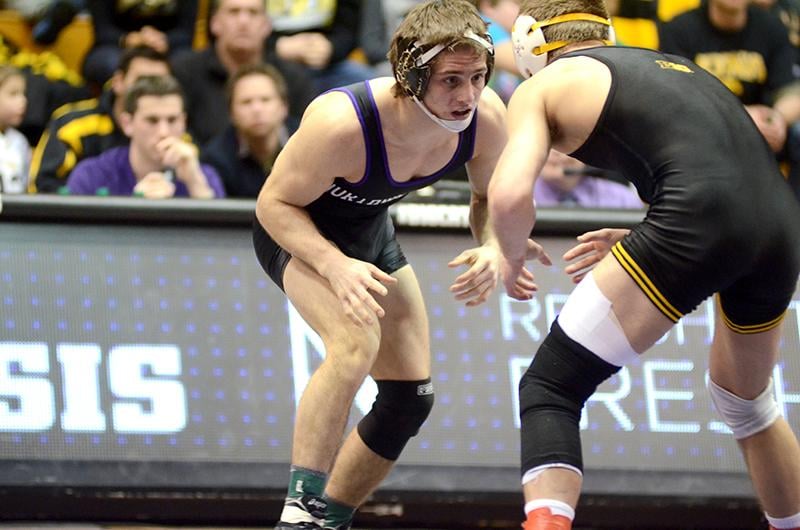 Jason Tsirtsis prepares for his match. After being shut out against No. 2 Iowa last weekend, the Wildcats’ road doesn’t get easier in a matchup with No. 1 Penn State.

After coming off of their worst defeat of the last decade, a 54-0 loss to No. 2 Iowa on Sunday, Northwestern’s road ahead won’t get any easier.

Interim coach Matt Storniolo, who wrestled at Penn State during his freshman year of college, said the team needed to hit the reset button before facing the Nittany Lions on Sunday. But Storniolo said the team had a good week of practice, and told the wrestlers to focus on their individual opponents rather than the school they’re facing.

“Our biggest message to the guys is to just wrestle your opponent — don’t wrestle the singlet that he’s wearing,” Storniolo said. “Against Iowa, we let them push us around a little bit just because they are Iowa and not necessarily because they are that better of an opponent.”

Nine of Penn State’s 10 starting wrestlers are ranked at least No. 16 in the country, and three are ranked No. 1 in their weight classes — Zain Retherford (149), Bo Nickal (174) and Morgan McIntosh (197). Meanwhile, NU will forfeit the 141-pound match because of senior Jameson Oster’s injury, and is working to get freshman Anthony Petrone acclimated to wrestling in the starting lineup.

But the team’s biggest concern is the health status of Tsirtsis. After battling injuries throughout the season, Tsirtsis has a disappointing 5-3 record, including a loss to Iowa’s Brandon Sorensen, who is the No. 2 wrestler at 149 pounds.

Tsirtsis may get the chance to redeem last week’s injury forfeit on Sunday, when he matches up with the top-ranked Retherford. But Storniolo said Tsirtsis is questionable to compete this weekend, and with the season already half over, Tsirtsis is in need of a win to keep alive his hope of making the NCAA Tournament.

“I know what I’m capable of, and it’s not necessarily about winning or losing,” Tsirtsis said. “But just performing the best I can and whatever the outcome is, I’ll take those results and work with them.”

Although the Cats only have one team win this season, Storniolo emphasized the importance of coming away with individual wins during this tough stretch of schedule. But with the Nittany Lions’ nine ranked wrestlers, individual wins won’t come easy for NU.

Sophomore Mitch Sliga was one of three Cats who neither forfeited nor got pinned in the team’s last match. But Sliga was shut out 16-0 by No. 3 Nathan Burak, and will face Nickal this weekend.

Sliga is second on the team in dual points, and said individual wins are a priority right now.

“Every match counts especially towards the end of the year,” Sliga said. “If something bad happens at Big Tens, then having more wins will give you a better chance of getting a wildcard bid to the tournament.”