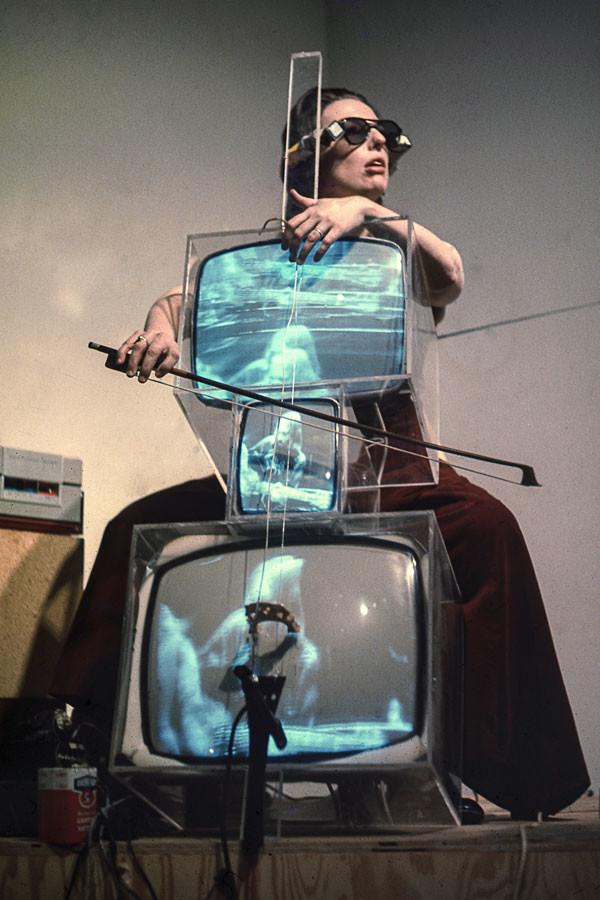 Charlotte Moorman plays her TV Cello, one of the best-known pieces of her non-traditional art. The Block Museum of Art put together an exhibition on Moorman and her contribution to the avant garde movement of the 1960’s.

The Block Museum of Art will present the first large-scale exhibition on 20th century musician and performance artist Charlotte Moorman — an artist who focused on the intersection between the public and art.

The opening of the exhibit —  titled “A Feast of Astonishments: Charlotte Moorman and the Avant Garde, 1960s-1980s” — coincides with the opening of a new music and communications building that is part of the “Arts Circle,” an area on campus that encourages interdisciplinary learning between music, dance and visual arts.

“Charlotte really believed that art could be for everyone,”  said Lisa Corrin, the Block Museum’s Ellen Philips Katz Director. “The arts circle at Northwestern is a state of mind, and the idea is for people to work together across all ideas of creative expression. It has its roots in the 1960’s and the kinds of artists that Charlotte Moorman championed.”

The exhibition will officially open Jan. 16 with a celebration including student music performances and a panel of five artists that knew and worked with Moorman. There will also be performances of Moorman’s work throughout the exhibition’s duration.

Special Collections at University Library has been arranging Moorman’s archives for 15 years. When Corrin found out about these archives four years ago, she said she approached the library with the idea of putting together an exhibition.

“(The library) had all of the materials that we would need to create the exhibition,” she said. “The archives had films and photographs and letters and masks. We could never have done the show without them. We were able to tell the story of Charlotte’s achievements by working together.”

Aside from two small-scale exhibitions on Moorman, the Block is the first museum to fully commemorate Moorman’s achievements. Moorman, an advocate for non-traditional forms of art and expression, has been on the periphery of the art scene, though she played a significant role in the avant garde performances of the 1960’s, said Corinne Granof, curator of academic programs at the museum.

Moorman herself was trained as a cellist, but went on to become an eclectic artist. She performed festivals in very public places, such as Grand Central Terminal, which were meant to provide an intersection between the art world and the public, Granof said. The library’s archives used in the exhibit include original music scores, audio and video content, photographs and posters.

Corrin, Granof and Scott Krafft, curator of Special Collections, worked with three other curators and consultants to put together the exhibition, which took more than three years. The main gallery alone contains more than 300 objects, with even more information in audio and video form.

Once it closes at the Block, the exhibition will travel to the Grey Art Gallery at New York University, and then to the Museum Der Moderne in Salzburg, Austria.