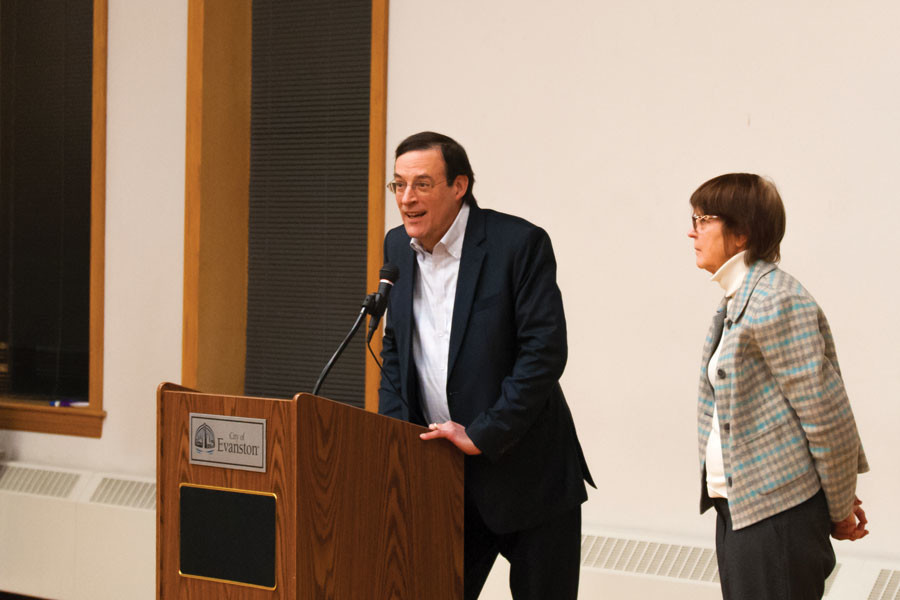 John Zbesko, one of 10 candidates who submitted his or her name for consideration in filling the vacant 7th Ward alderman seat, spoke at a town hall meeting Tuesday night. Mayor Tisdahl called the meeting to gather community input in appointing the new alderman.

Responsiveness to constituents and fiscal responsibility are two of the qualities 7th Ward residents said they want in a new alderman at a town hall meeting hosted by Mayor Elizabeth Tisdahl on Tuesday night.

“I heard a lot about listening, so that is going to be a major focus,” said Tisdahl, who heard input from almost 20 Evanston residents and business owners, at the meeting.

Tisdahl is set to appoint a new alderman for the ward to replace former Ald. Jane Grover, who resigned at the end of 2015 to serve as the outreach principal for the Chicago Metropolitan Agency for Planning.

Eight out of the 10 candidates who have put in names for the mayor’s consideration gave brief informal statements to more than 50 attendees. Many of the speeches focused on candidates’ own involvement in the city.

Several candidates also mentioned that they were impressed by the applicant pool, among them Lori Keenan, who said she thought the other candidates were highly qualified for the position.

“I’m looking for a council person, whether it’s me or any other of the other very qualified people… to stand up and listen to constituents and represent those people and not force them to come back meeting after meeting after meeting,” said Keenan, who works as a principal for a public relations agency.

Many residents emphasized the importance of aldermen being accountable to their constituents. A few residents suggested the appointee should refrain from running for a second term and instead let those who live in the 7th Ward elect a new alderman, an opinion the mayor and others residents disagreed with.

“We need a strong, tough alderman with direction,” said Bob Danon, who owns The Danon Gallery, 1810 Central St. “Personally, I don’t care if they’re in there for one or two or three terms if they’re doing a good job.”

Other issues brought to the mayor included the need for continued development of the Central Street business area, a need for a focus on economic as well as environmental sustainability and a commitment to serve all of Evanston, not just residents of the 7th Ward.

“There are a couple of aldermen who I think see their role as mainly serving their ward’s concerns,” 9th Ward resident Elliot Zashin said. “I think it’s important that an alderman look at the community as a whole.”

Tisdahl shared her own opinions on what attributes she is looking for in the new alderman, citing fiscal responsibility and a commitment to diversity as important factors.

The mayor discussed her personal experience with a close friend who had fallen behind on mortgage payments and was ultimately evicted — an incident she said is all too common among the city’s low-income and minority residents, which is leading to a decrease in Evanston’s diversity.

“I think diversity is important — it’s what’s special about this community,” Tisdahl told The Daily. “I would hope that whoever the alderman is would be committed to helping us remain a diverse community.”

Tisdahl said she hopes to make the decision before next Tuesday. The appointed candidate would then have to be approved by City Council before beginning his or her term, which will expire in 2017.

“This is a wonderful job,” she said at the meeting. “But it’s a very difficult and demanding job and you have to want it.”