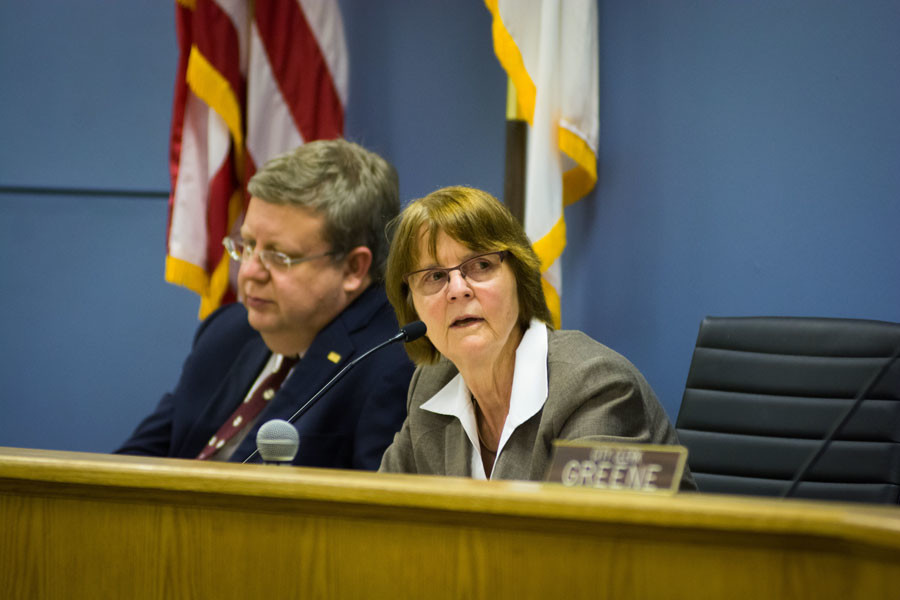 Evanston Mayor Elizabeth Tisdahl attends a City Council meeting. Council heard an update from Evanston Own It, a coalition of city groups formed after episodes of gun violence in 2014.

City Council unanimously approved a consent agenda that authorized the city manager to negotiate an agreement with the Illinois Department of Transportation to finalize federal grants for development on the construction project at the intersection of Emerson Street, Ridge Avenue and Green Bay Road.

Aldermen authorized the city manager to execute several contracts with IDOT in order to accept two federal grants of about $1.9 million each from the Federal Surface Transportation Program to improve street intersections as part of the project, as well as a Congestion Mitigation and Air Quality Program grant for Green Bay corridor improvements.

The multifaceted capital project will include improvements for safety purposes at the intersections, including traffic signal updates and installations, drainage improvements and landscaping. Ald. Donald Wilson (4th) said proposals for improvements for landscaping along the railroad embankment failed to move forward due to the inability to get approval from Union Pacific Railroad on this part of the project.

“They might have been concerned with the liability and maintenance on this part of the proposals,” Wilson told The Daily. “I hope city staff attempts to bring those embankment improvements back into the conversation because it would make the area look so much better.”

Council also heard an update from Evanston Own It, a coalition of various church clergy and city officials dedicated to fostering a sense of community in Evanston. The group was founded in part by Ald. Delores Holmes (5th) in July of 2014 after episodes of gun violence in the city left many feeling unsafe, said Patricia Efiom, senior pastor at Ebenezer African Methodist Episcopal Church, 1109 Emerson St. Efiom said the group’s work involves bringing people together and stemming gun violence.

“Over the course of the last year, we have touched the lives of many of the victims,” Efiom said. “We are men and women of the faith who … have built strong relationships among each other. We are now seeing the benefits of that and are so grateful.”

She said the group will be honored by Youth & Opportunity United, a youth support group in Evanston, on Martin Luther King Jr. Day in acknowledgment of their efforts to improve city safety and spirit.

Efiom also thanked Mayor Elizabeth Tisdahl and other city officials for their support of the group, naming Holmes as the group’s visionary.

Holmes said the clergy’s effort to draw attention to and limit gun violence in the city was much needed.

“We wanted to get together and see what we could do for the (5th) Ward,” Holmes said. “Whenever there is a shooting, they walk with the mayor and myself and open up their doors and services to the families. They’re just a fantastic group of people to work with.”