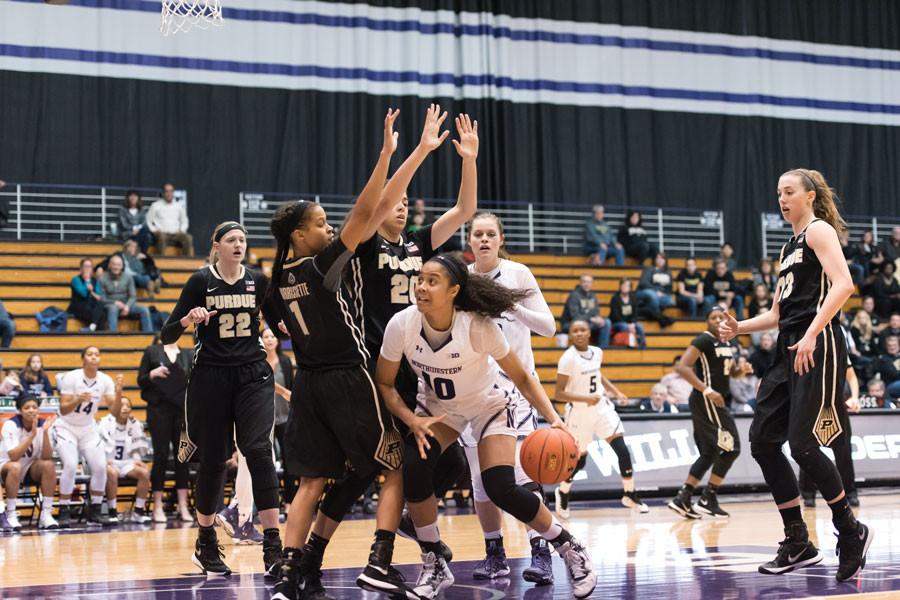 Nia Coffey gets walled off in the paint. The junior forward scored a team-high 13 points in a difficult defeat at the hands of Michigan State.

Seeking a marquee road win against a ranked team, Northwestern wilted on Sunday.

Northwestern’s performance was poor from the outset. The Cats never led and did not score until more than three minutes in, and trailed by 10 with 4:13 to play in the first.

By halftime, Michigan State led by 18 and, although NU opened the second half with an 8-0 run, the hosts extended their lead to 25 at the end of the third quarter.

“They came out of the gates in the second half and did a really good job of getting some momentum,” Michigan State coach Suzy Merchant said. “Our kids really responded and that shows a little bit of the veteran group that we have out there.”

The Cats had a similar run in the first half, cutting an early 10-point deficit to one with a 9-0 run late in the first quarter. Just as quickly as NU reduced the lead, however, the Spartans scored 10 straight of their own to extend their lead to 26-15.

“We just had a tough night,” McKeown told WNUR.

Freshman forward Pallas Kunaiyi-Akpanah, who made her first career start Sunday, did not make a significant impact. She recorded seven rebounds but failed to score as NU was outrebounded 50-40.

Sunday’s game was the Cats’ second straight loss and third in four Big Ten games. After a 10-0 start, NU finds itself near the bottom of the league standings ahead of consecutive games against top 10 teams. The Cats host No. 5 Ohio State on Thursday before traveling to No. 8 Maryland next Sunday.

McKeown believes that NU needs to shore up its defensive effort to have success against elite opponents.

“That’s something we’ve got to focus on as we get ready for Ohio State,” he said of team defense. “That’s really the most important thing.”

This post was updated at 6:05 p.m. with postgame quotes.