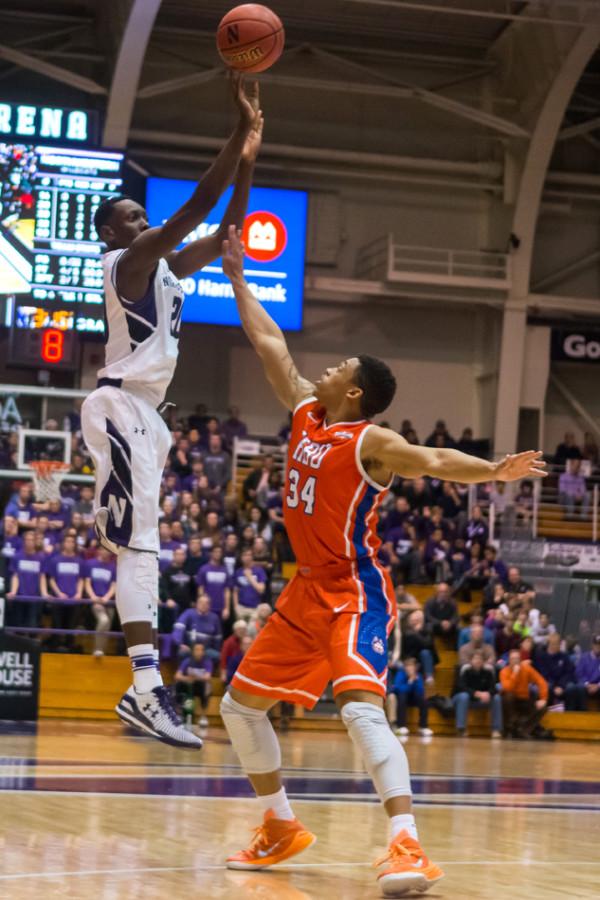 Scottie Lindsey shoots a 3-pointer. The sophomore guard keyed Northwestern’s victory over Minnesota, coming off the bench and shooting 4-of-6 from the field.

Without senior center Alex Olah, the two guards tried to will Northwestern to a win over Ohio State on Wednesday by themselves. It didn’t work, as they together made just 8-of-32 shots in the Wildcats’ 65-56 loss.

“Teams are really going after those guys and making them take tough shots,” said coach Chris Collins at the time, “and we’ve got to find a way to get contributions from other guys.”

Falzon and van Zegeren both set or tied their highest single-game scoring totals in a purple-and-white jersey. For the first time since the season opener, Falzon hit the 20-point milestone, draining 6-of-9 attempts from 3-point range. Van Zegeren hit double-digits for the first time this season, chipping in 11 points as he dominated the paint and went 3-for-3 at the free-throw line.

Lindsey responded from a goose egg against the Buckeyes – the first time he was shut out of the box score since Nov. 20 – by hitting 4-of-6 field goals.

“I thought it was a team win. It wasn’t just the ‘B-Mac’ and Tre show,” Collins said. “We got good contributions from a lot of players.”

The homecoming of junior forward Sanjay Lumpkin, a native of Wayzata, Minn., was also a success. Lumpkin pulled in 10 rebounds, his most since the season opener, with a large group of friends and family in attendance.

McIntosh and Demps, meanwhile, were able to thrive with the weight off their shoulders. McIntosh set a season high with 11 assists, while Demps recorded 9 of his 13 points in the second half with NU already comfortably ahead.

“In order to get assists, guys have to make shots,” Collins said of McIntosh’s performance. “The more firepower you put around him, you’re going to to see more nights like that, because he wants to pass.”

After the Ohio State game, the team held a meeting emphasizing the need for all players on the floor to make their presences felt, Demps said. On Saturday, the meeting yielded its fruits.