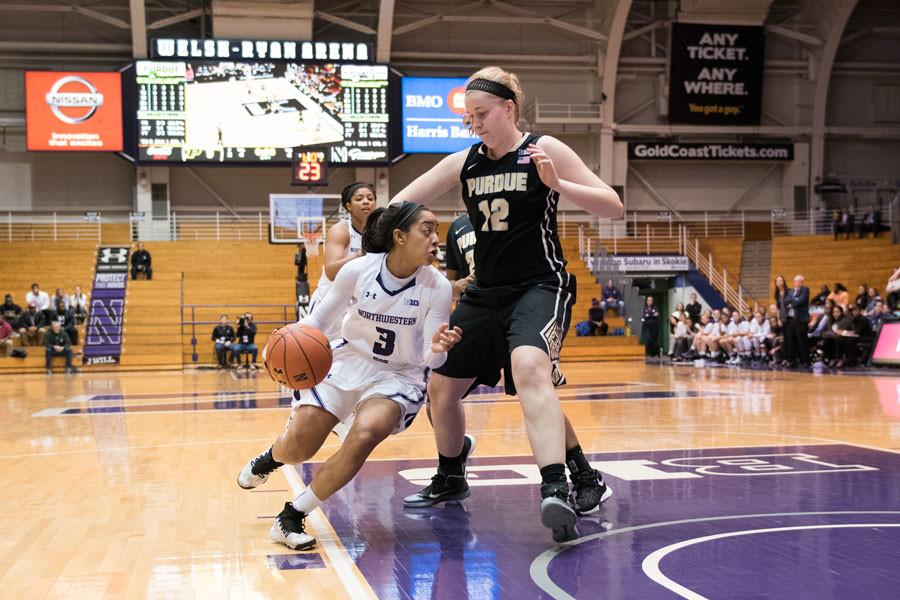 Ashley Deary dribbles around a defender in the paint. Deary and the Wildcats have struggled with depth this season, evidenced by Northwestern’s 2 bench points on Thursday.

In the first segment of a challenging four-game stretch, Northwestern failed.

The No. 16 Wildcats (12-3, 1-2 Big Ten) committed 21 turnovers, offsetting two 20-plus point performances, as Purdue (12-2, 3-0) handily defeated NU 85-71 Thursday night at Welsh-Ryan Arena. The contest marked the start of a difficult stretch for the Cats, who play their next three games against ranked opponents.

Instead of beginning the span with a home victory, NU looked sloppy in defeat. The Cats’ 21 turnovers marked a season-high and they allowed 14 offensive rebounds. The Boilermakers took advantage of the extra opportunities and scored 13 second chance points.

In the first half, the contest was equal. Purdue scored the game’s opening 7 points, but the Cats used an 13-4 run to take a 13-11 lead later in the period. NU’s only lead of the night was short lived, however, as the visitors regained the advantage just a minute later.

Senior guard Maggie Lyon temporarily leveled the score at 21 in the second quarter, but Purdue then regained a lead it would not relinquish.

“We weren’t as focused on defense as we needed to be,” junior guard Christen Inman said. Purdue’s a good team, and they exploited that.”

Besides a lack of focus, NU also had to play extended minutes without junior star forward Nia Coffey. She picked up two fouls in the first quarter and a third midway through the second.

As a result, Coffey played only 12 minutes in the half and she scored just 7 points and grabbed only two rebounds.

“It’s really hard for us. We need her on the floor,” McKeown said of Coffey’s foul trouble. “We need her scoring, we need her presence. She creates double teams. You can’t afford to have her sit down.”

A strong fourth quarter push was not enough to pull NU out of a deep hole. Although the Cats pulled within 9 on two occasions in the final 3:23, NU could claw no further into a Purdue lead that at one point reached 20 points.

The Boilermakers parlayed a 7 point halftime advantage into a 13 point lead after three quarters. In a run that lasted just over four minutes between the third and fourth quarters, the Boilermakers extended their 8 point lead to a 20 point cushion.

“We fought back. I’m proud of that,” McKeown said of the late run. “I thought we had a couple chances in the last three minutes maybe…we just couldn’t finish that out.”

The Cats were not without impressive individual scoring performances. Lyon led all scorers with 24 points, and Coffey added 22 of her own. NU’s four primary scorers — Coffey, junior guard Ashley Deary, Inman and Lyon — scored 69 of the Cats’ 71 points.

Positive results elsewhere on the box score were hard to come by. Deary, who averages nearly five steals per game, recorded just three. Coffey, NU’s leading rebounder at 11.6 per game going into Thursday, had just six.

The road for the Cats will get tougher before it eases. NU will travel to No. 23 Michigan State on Sunday before playing host to No. 5 Ohio State and visiting No. 8 Maryland. Although those three games will take place in an eight day span, McKeown still believes that his team is in a good spot.

“We’re sitting here 12-3, and we’ve positioned ourselves to have a great year, and we’re going to focus on that too,” he said. “Tough night. Just a tough night.”