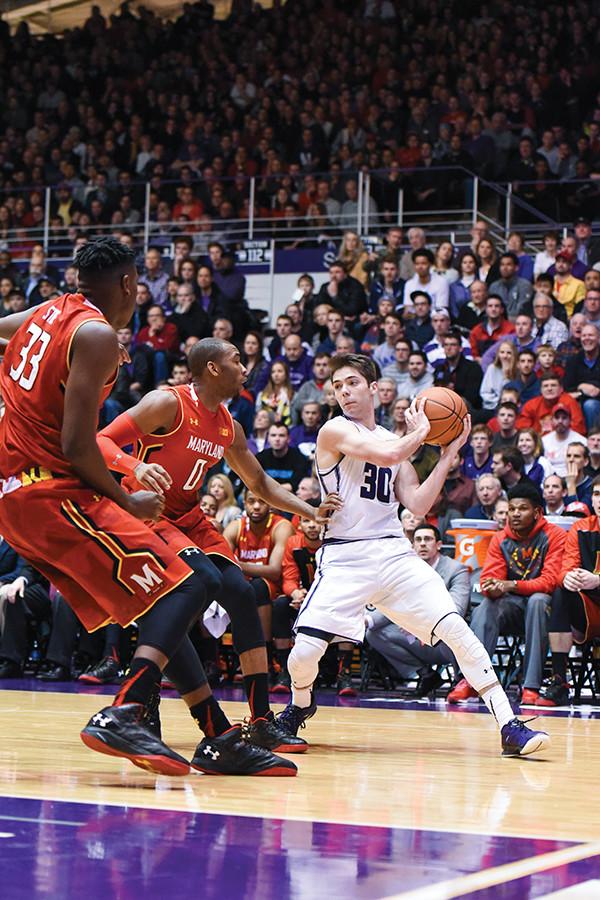 Bryant McIntosh surveys the defense. The sophomore guard will look to help Northwestern bounce back offensively against a talented Ohio State team Wednesday.

In its biggest game of the season to date, a home matchup with then-No. 4 Maryland on Saturday, Northwestern played one of its worst offensive games.

Sophomore guard and team-leading scorer Bryant McIntosh had another strong game attacking off the dribble. But his backcourt counterpart, senior guard Tre Demps, shot just 4-for-16 from the field while the Cats’ role players struggled to find and make open shots.

McIntosh said NU missed reads on potential counter actions offensively, and its struggles with execution made life more difficult for the Cats than it needed to be. But coach Chris Collins gave credit to a talented Terrapin team that went after NU defensively.

“We had a tough shooting night last game, and I thought a lot of that had to do with Maryland’s defense,” Collins said. “I thought their length really bothered us. They’re just a big team.”

From an athleticism and length perspective, the Cats won’t get a reprieve Wednesday against Ohio State (10-5, 2-0). The Buckeyes are big, talented, and have been stingy on defense all season, surrendering an average of only 63.6 points per game.

While the shots weren’t falling against Maryland, NU found a few other avenues to score points. Collins highlighted the effort of freshman forward Aaron Falzon in the game, with the 3-point specialist going to the rim and notching a career-high eight free throw attempts.

“A lot of teams are different from a physicality standpoint,” Pardon said. “I just have to do different things and maneuver to get my shot off and help my teammates get shots.”

But these bright spots couldn’t fix all that went wrong for NU, whether it was Demps’ struggles from the field, a 13-for-22 team effort on free throws or a general inability to make shots inside and out. If these same issues arise again on Wednesday, the Buckeyes have the talent to make the Cats pay as well as a hot leading scorer to hurt NU’s defense in junior forward Marc Loving, who is coming off a 27-point game against Illinois.

And in the quest for an NCAA Tournament berth, NU hopes to prevent strong defensive teams from neutralizing its offensive strengths by keying on the Cats’ shooters. McIntosh said the team can’t let aggressive perimeter defense affect its confidence in its 3-point shooting.

“That’s how I think a lot of teams are going to start guarding us, just because (Maryland) had success with it,” McIntosh said. “If we second-guess ourselves with our jump shots, it can become a habit where we miss shots.”