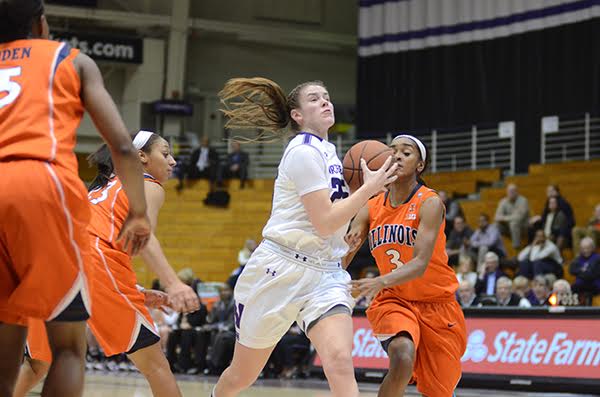 Maggie Lyon drives around the opposing defense. The senior guard fouled out in Northwestern's loss to Penn State Thursday as the Wildcats dropped their Big Ten opener.

After losing to Penn State, Northwestern will head into 2016 winless in conference play.

The Wildcats (11-2, 0-1 Big Ten) fell to the Nittany Lions (6-6, 1-0) 79-72 on Thursday. Two of NU’s most experienced players, senior guard Maggie Lyon and junior forward Nia Coffey, fouled out when the team needed them late.

Despite a run in the third quarter, the Cats didn’t sustain a lead big enough to put away Penn State. After shooting an abysmal 26 percent in the first half, NU didn’t shoot much better in the second, finishing the game at 33 percent.

“We just couldn’t defend late in the fourth quarter and that was the difference in the game,” McKeown said. “We just broke down defensively at the wrong time.”

Despite a successful first quarter for Lyon, the Cats started shooting poorly from the field. Unable to connect from the anywhere on the floor, NU started the game shooting 0-for-6.

However, midway through the first, NU heated up and controlled a 16-9 lead. Penn State came back though, going on 13-2 run to close a first quarter capped off by a Brianna Banks buzzer beater.

NU had trouble controlling Penn State’s inside game. Center Candice Agee was dominant for the Nittany Lions, with 6 points and 13 rebounds in the game.

Despite double-digit first-half points, Lyon and Coffey shot a combined 7-of-22 from the floor. Similarly, Penn State’s poor shooting and foul trouble limited the damage going into halftime as Northwestern trailed 37-31 at half.

After trailing by as many as 13 in the second half, NU outscored the Nittany Lions 23-15 in the third quarter, including putting together a 12-0 run. During said run and late third quarter surge, sophomore guard Lydia Rohde hit two clutch 3-pointers and Ashley Deary’s steal and layup with four seconds left gave the Cats their first lead since the first quarter.

After scoring 23 points in the third quarter, NU ended its hot streak, scoring only 5 points midway through the fourth quarter and allowing Penn State to take a 61-59 lead on a Banks layup.

As Lyon and Coffey sat on the bench, the Cats couldn’t manage a game-winning run.

NU’s next game is Sunday against Nebraska at 1:30 p.m.