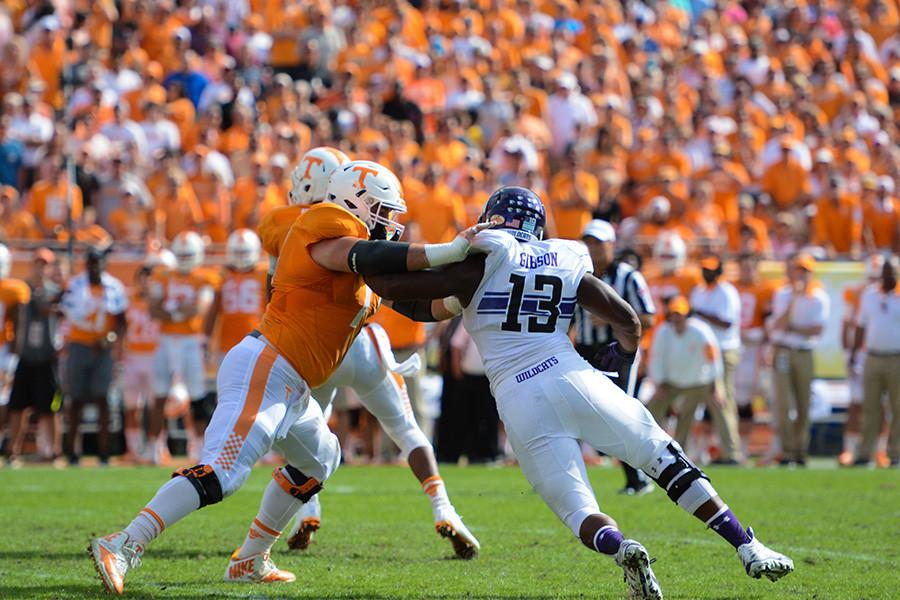 Senior defensive end Deonte Gibson battles against a Tennessee player. The Wildcat captain along with his senior teammates played their last game for Northwestern on Friday.

The coach took a moment to regroup after his seniors played their last game as Wildcats.

“I want to say thank you to our seniors, an amazing group of young men from absolutely amazing families,” the coach said. “It was really hard for me the other day, and it’s hard for me now. Our program has been through a lot in the past two years, and our seniors have been the reason why we got ourselves here.”

Despite disappointment in Tampa on Friday following a 45-6 blowout loss to the Tennessee Volunteers, the Cats’ senior class was the first to lead the Cats to a bowl since the 2012 season. Key players, such as safety Traveon Henry, defensive Dean Lowry and superback Dan Vitale, helped in defining games, resulting in the Cats’ unprecedented 10-3 record. Henry, in particular, followed through on Friday, ending his NU career leading the team in tackles with 16 and outplaying all Volunteers defenders.

Defensive end Deonte Gibson said he, as a senior, believes the team has re-laid a foundation for winning. A captain for the team, Gibson said he wanted to make sure the sense of working hard was instilled throughout the season.

Senior wide receiver Christian Jones noted how much players such as Gibson, Lowry and others have added to the program, saying he’s proud to be a part of the group of seniors graduating this year. Jones is still in shock that Friday’s game was his last as a Wildcat.

Looking at next season, position groups on both sides of the field will lose substantial depth. This year’s statistics outline a senior class that contributed substantially. On the receiving end, an area in which NU particularly struggles, Vitale ends the season with almost 20 more receptions than any other player.

Cornerback Nick VanHoose, who didn’t play Friday because of an injury, and Henry both changed the season with timely interceptions. Lowry and Gibson grounded a defensive line that was pivotal in this season’s success.

Gibson said he’s only excited to see what the team does next year, saying that players who will step up are names fans might not have heard yet. As for the defensive line that he and Lowry led, it’s in good hands, he said.

“I’m so proud of my guys Ifeadi (Odenigbo) and Xavier (Washington) and I fully believe they’re going to take over the reins and do even better than what I’ve done in my career,” he said. “Those guys are special and you guys will see that next year.”

Fitzgerald said the staff worked to get as many seniors on the field toward the end of the game. Quarterback Zack Oliver led the final few drives, and receivers Pierre Youngblood-Ary and Cameron Dickerson each made receptions before the final whistle.

“You walk out with a pit in your stomach knowing this was your last game,” Fitzgerald said.