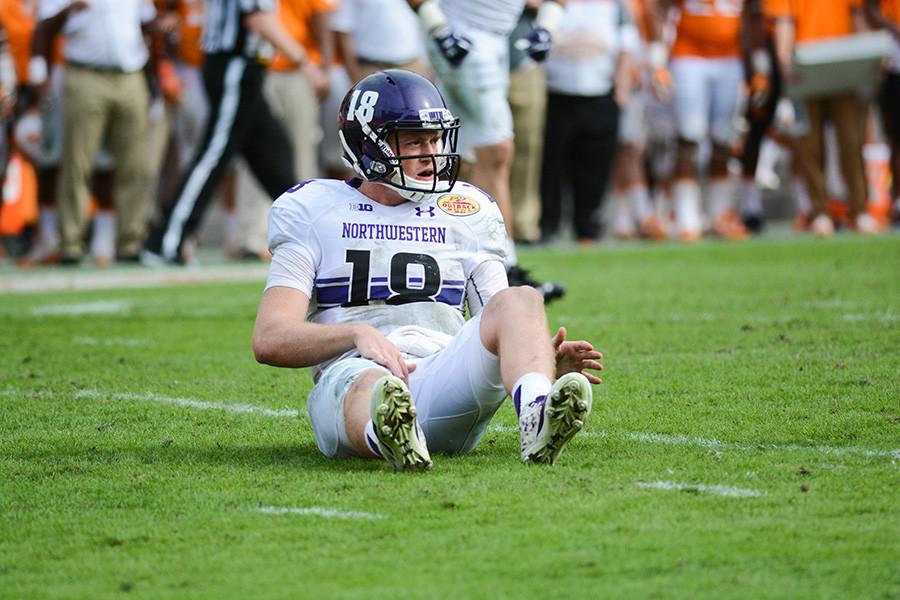 TAMPA, Fla. — Friday could have been an exclamation point on a historic season, a celebration of one of the greatest teams in Northwestern history.

“I’m sure everyone will lighten up afterward, but right now nobody’s happy with a loss,” senior receiver Christian Jones said. “Everybody’s disappointed, everyone wants to win the game, but it’s been a great season.”

NU’s offense, patchy all season, was fully neutered Friday by Tennessee’s defense. Thanks in part to shoddy offensive line play, redshirt freshman quarterback Clayton Thorson submitted one of his worst performances of the season, an 8-for-20, 57-yard, two-interception mess. Senior Zack Oliver replaced Thorson in the fourth quarter and did no better, completing six passes (of 13 attempts) to Cats receivers and two to Volunteers defenders, with the latter interception returned the length of the field for a Tennessee touchdown.

“Their d-line was pretty good, their back end was solid, and they didn’t make a lot of mistakes,” Thorson said of the Tennessee defense. “That was the difference in the game.”

The Cats scored one touchdown in the second quarter, on a five-yard carry by sophomore running back Justin Jackson, and never came close to the end zone again.

With the NU offensive unable to move the ball, the defense spent seemingly all afternoon on the field, finally crumbling in the second half. After leading 17-6 at halftime, Tennessee’s offense scored one touchdown in the third quarter and two in the fourth to run away with the game.

Volunteers quarterback Joshua Dobbs completed 14-of-25 passes for 166 yards and added 48 yards and two touchdowns on the ground. Running back Jalen Hurd, meanwhile, carried 24 times for 130 yards and a score on his way to game MVP honors.

Tennessee outgained NU 420 yards to 261 on the day, with 62 of the Cats’ yards coming during a garbage-time drive.

“It’s one of those games where you look at the score, look at the scheme, you see what happened, and it just wasn’t your day,” senior defensive end Deonte Gibson said. “They played a great ballgame. Hats off to them.”

Silver linings were scarce for NU on Friday. Jackson had 74 yards on 14 carries and the Cats’ only score, and sophomore cornerback Keith Watkins II played well in place of injured senior Nick VanHoose. Otherwise, almost everything went wrong, from junior kicker Jack Mitchell’s missed field goal and extra point to the offensive line’s inability to keep Thorson safe in the pocket. The defeat was the second-most-lopsided postseason loss in program history.

Coach Pat Fitzgerald and the NU players who spoke after the game were unanimous that the issue wasn’t preparation or lack of focus. The Cats were simply outplayed by a very good team.

Despite the blowout loss, Fitzgerald emphasized cause for optimism. After entering the season with meager expectations, NU tied a program record with 10 wins, including a five-game streak to end the regular season. One bad game against a strong opponent doesn’t outweigh the previous three months, Fitzgerald said.

“It should be kept in perspective,” the coach said. “You win 10 football games, it’s a darn good football season. It doesn’t matter what league you’re in, what level you’re at.”

NU’s players were far from disconsolate following the game Friday. Thorson, Gibson and Jones all described the season as a success blighted by three bad outcomes, in which the Cats lost by a combined 107 points. Multiple times, Gibson and Jones in particular mentioned how proud they were to have played with this group. Following two straight five-win seasons that left the Cats out of postseason play, Fitzgerald and the players view 2015 as a step forward for the program.