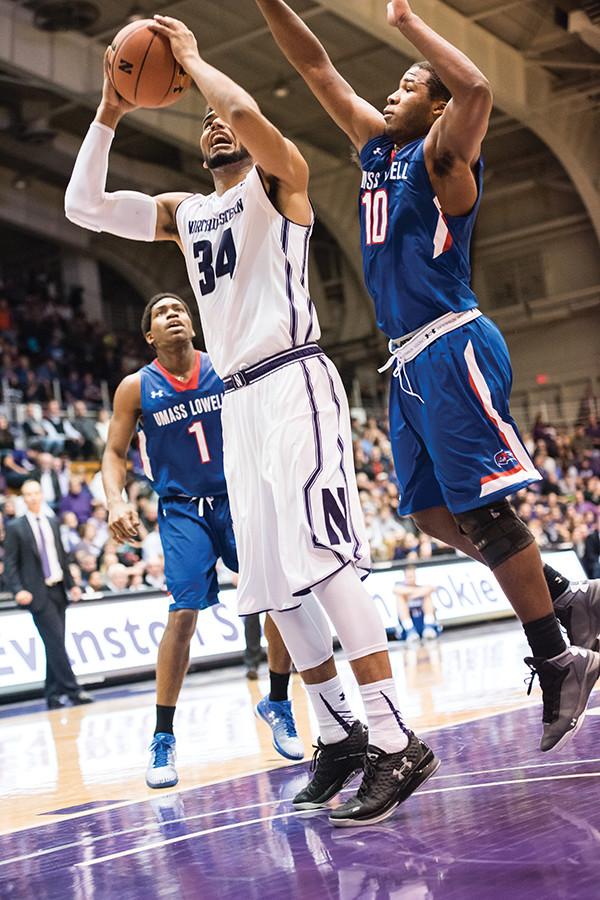 Sanjay Lumpkin battles in the paint. In the first half, the junior forward sparked an otherwise lackluster offensive performance for the Wildcats.

Northwestern prevailed in overtime against crosstown rival DePaul on Saturday, relying on the efforts of senior guard Tre Demps to stay in the game.

The Wildcats (10-1) defeated DePaul 78-70 after trailing the Blue Demons (5-6) 30-29 and shooting 2-of-13 from three at halftime. Along with NU’s shooting woes, the team also struggled to defend DePaul’s three-point shooters, including guard Aaron Simpson who scored 13 points and shot 3-of-4 from three in the first half.

“They were in a great rhythm against us,” coach Chris Collins said. “We were struggling with their ball screens with (Billy) Garrett and Simpson and (Myke) Henry. They were getting every shot they wanted and they were playing well.”

The Cats’ offense had trouble early, but junior guard Sanjay Lumpkin scored the team’s first seven points to keep NU within reach. Lumpkin finished the game with a season-high 14 points.

“I thought quietly, Sanjay had a great game.” Collins said. “You know you’re really going to get it from (Alex) Olah and B-Mac and Tre, but for Sanjay to give us 14 points and seven rebounds… he had a huge tip-in late in the game.”

The high foul count forced Demps to take over the game, and after scoring only two points in the first half, he finished regulation with 15 points. Demps also had a chance to win the game in regulation, but missed a last-second floater.

In overtime, freshman forward Aaron Falzon hit two clutch threes after going scoreless in regulation to give the Cats a commanding lead. Demps then made 1-of-2 free throws and recorded a steal to secure the win for NU.

“I thought I was thinking a little bit too much in the first half,” Demps said “In the second half I kind of just let everything go, and was on attack mode. Things kind of opened up after I did that.”