Women’s Basketball: Northwestern moves to 10-0 in rout of Alcorn State 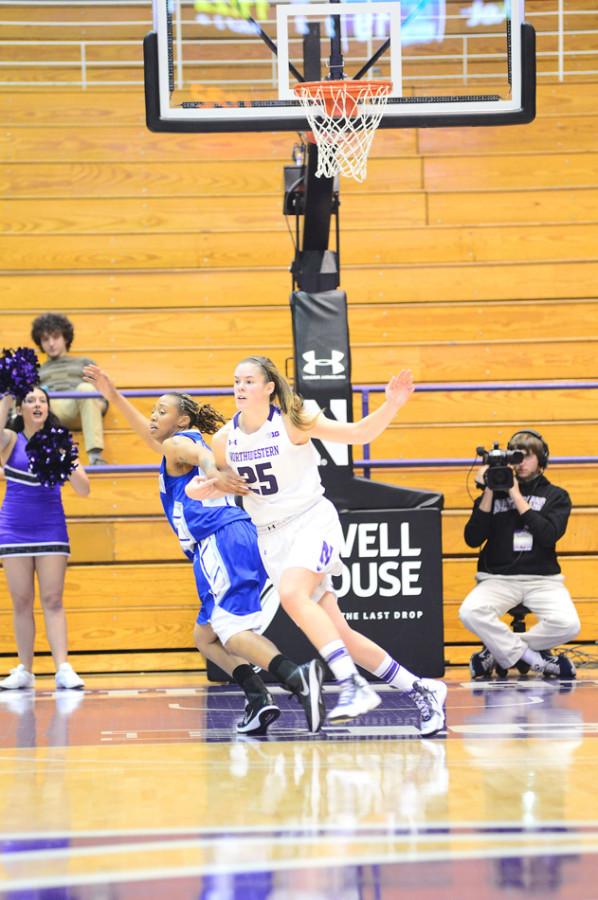 Maggie Lyon works to get position in the paint. The senior guard scored 9 of Northwestern's first 12 points Tuesday as the Wildcats raced out in front and routed Alcorn State.

On annual Field Trip Day, the chants of “Let’s Go Cats!” took on a higher pitch as thousands of grade school children cheered on Northwestern’s 91-47 rout of Alcorn State to stay undefeated.

The No. 12 Wildcats (10-0) showed why voters think so highly of them, demonstrating their offensive explosiveness during their biggest win of the season. NU also posted season-highs for points in a quarter and a half, with 31 in the first quarter and 56 in the first half.

The Lady Braves (1-6) had no answer for junior forward Nia Coffey, who scored 20 points in the first half while adding 17 rebounds. Many of those baskets came on lobs she received in the post where Alcorn State had no one that could compete with her athletically.

“I think the level she’s at mentally, we’re just really fortunate to have her on our team,” coach Joe McKeown said of Coffey. “She competes so hard every day.”

The Lady Braves were outmatched at every position on the floor and were unable to get anything going offensively. They shot just 28.4 percent from the floor, oftentimes on awkward jump shots. Alcorn State did not score its first field goal until about 4:40 remained in the first quarter.

Senior guard Maggie Lyon started the scoring for the Cats, scoring 9 of the first 12 points for NU. Lyon ended the day with 15 points.

Tuesday was the first time this season five Cats scored in double-digits.

The lopsided score allowed McKeown to give playing time to many of the team’s reserves. Two freshmen benefitted the most from their extended playing time: Hankins and forward Pallas Kunaiyi-Akpanah.

Kunaiyi-Akpanah filled in for sophomore guard Maya Jonas, grabbing a whopping 13 rebounds, including six offensive boards, in only 19 minutes. She also added 4 points and four steals in a well-rounded performance.

Hankins showcased her ability to play backup point guard, scoring 10 points and demonstrating her aggressive play on numerous drives to the basket.

Leading the way for the Lady Braves was senior Norianna L. Haynes who had 20 of Alcorn State’s 47 points.

One thing NU improved upon was rebounding. Before Tuesday, the Cats had been getting outrebounded by nearly 2.8 boards per game, but on Tuesday, NU outrebounded the Lady Braves by 17.

Field Trip Day is a way for the Cats to draw large crowds and create an electric atmosphere that is usually lacking even when the team is as successful as it has been this year. After the game, McKeown praised the atmosphere and encouraged more fans to come out and see the undefeated Wildcats.

“They deserve to have five or six thousand people watching them all the time, so that was exciting for our team today,” McKeown said.