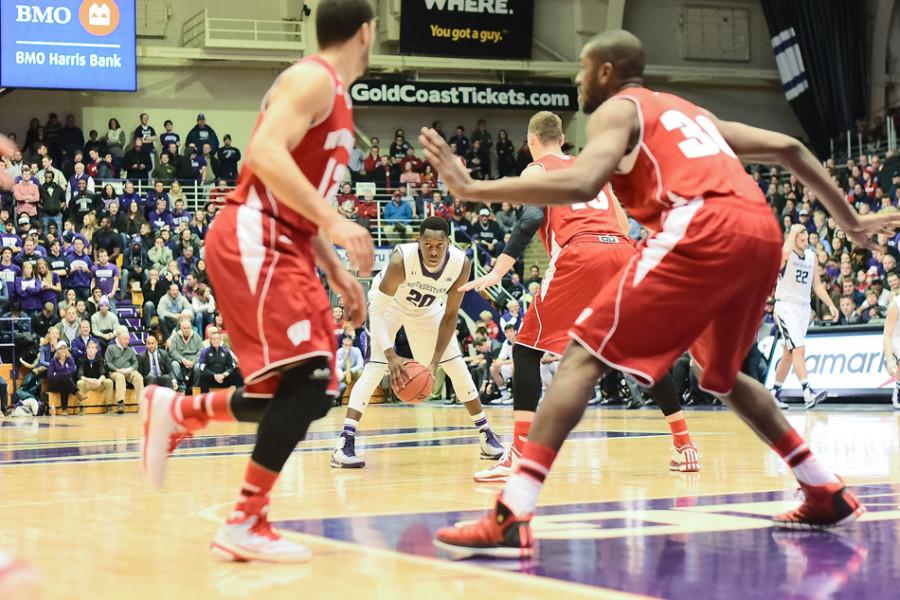 Sophomore guard Scottie Lindsey controls the ball at the top of the key. The sophomore shot 75 percent from the field en route to posting a career-high 26 points.

Following a 24-14 football victory over the Fighting Illini earlier in the day, Northwestern made sure to bring the same intensity to the hardwood.

Sophomore guard Scottie Lindsey led the team and set a new career-high with 26 points, shattering his old mark of 12. Lindsey was nine-of-12 shooting Saturday and 6-of-7 from three.

Other major contributors were sophomore guard Bryant McIntosh, who added 13 points, and sophomore forward Gavin Skelly, who chipped in 10 points off the bench.

In a bit of a surprising move, freshman guard Jordan Ash saw 17 minutes of playing time, by far his highest total of the season. Meanwhile, freshman forward Aaron Falzon, who has started every game this season, only played 13 minutes.

Saturday’s contest was a blowout from the get-go, as the Cats stormed out to an early 11-point lead before the 12-minute mark of the first half. Senior guard Tre Demps paced NU out of the gate, notching a ridiculous 10 points in just the first four minutes. Demps ended the night with 16 points.

By halftime, NU held a commanding 48-25 lead and never let the Privateers get within 21 for the remainder of the game. Additionally, the Cats led by 32 at one point after Lindsey sunk one of six three-pointers and cruised to an easy victory.

NU’s next challenge comes as part of the annual Big Ten/ACC matchups, with the Cats pitted against Virginia Tech on Tuesday. The Cats travel to Blacksburg and tip off against the Hokies at 6 p.m.