Men’s Basketball: North Carolina uses second half to pull away from the Wildcats 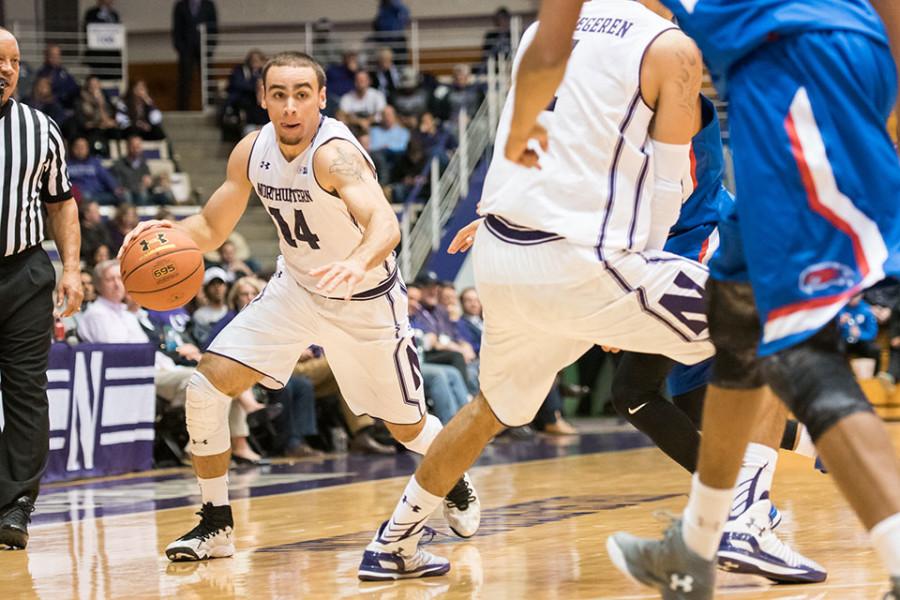 Tre Demps comes off of a screen and drives toward the baseline. The senior guard poured in 21 points in a losing effort, with 18 coming in the second half.

Northwestern grabbed an unlikely early lead but succumbed to superior talent in the second half as it fell, 80-69, to No. 9 North Carolina on Monday.

In their first of two CBE Hall of Fame Classic tournament games in Kansas City this week, the Wildcats (3-1) led by as many as six points during the first half before the Tar Heels (4-1) came alive and gained firm control for most of the second frame.

“I’m really proud of my team,” coach Chris Collins said. “We did a really good job on the initial defense. We wanted them to shoot jumpers, (and) they were 7-for-24 from three (point range).”

Both teams shot extremely well out of the gate, with NU making four of its first five attempts. A possession in which North Carolina pulled down three offensive rebounds, however, jumpstarted what became a nine-point run to extend the Tar Heel lead to 18-8.

The Cats answered back with a nine-point run of their own, cutting the deficit to 18-17 as freshman forward Aaron Falzon and senior guard Tre Demps drained consecutive 3-pointers. About six minutes later, sophomore guard Scottie Lindsey hit another 3-pointer to give NU its first lead, 30-27, with 5:46 left until half.

The Cats held the lead for just over three minutes until North Carolina went on a 14-1 run to gain a 43-36 advantage at halftime.

Four consecutive field goals by Demps pulled NU to 48-46 three minutes into the second frame, but the one-score difference was short-lived as the Tar Heels scored 23 of the next 28 points and put the contest essentially out of reach.

The Cats refused to surrender, however, cutting the margin to just nine with 2:30 left before a 3-pointer by North Carolina’s Joel Berry II blew any remaining wind out of the comeback effort’s sails.

“You play in these neutral environments against great teams and you find out what you’ve got, and I found out a lot of good things about my team,” Collins said.

North Carolina’s Justin Jackson exploded for a dominant 21-point, 13-rebound performance as his team — which was missing star senior Marcus Paige due to injury — handled NU 39-25 on the boards.

Three days after erupting for 32 points in a thrilling comeback victory over Columbia, sophomore guard Bryant McIntosh shot just 3-for-15 from the field and committed a team-high four turnovers on Monday.

“Playing against really good teams with really good defenders, they try to take away the primary offensive guy, and I think that opens up stuff for everybody else,” said Demps, who scored all but 3 of his team-leading 21 points after halftime. “That opened up things for me in the second half.”

The Cats will face Missouri, who lost to Kansas State 66-42 in the first game Monday at the Sprint Center, on Tuesday evening in the tournament’s consolation game.