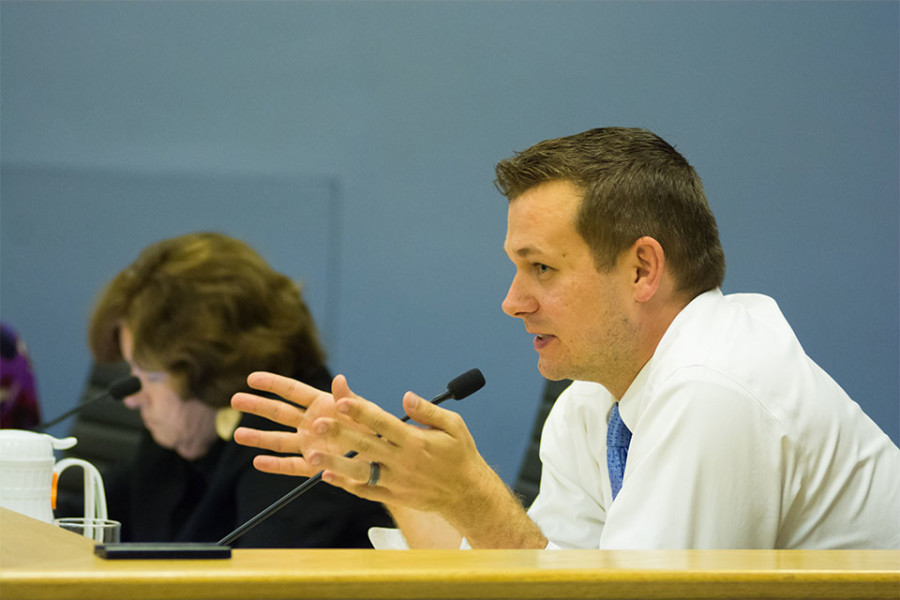 Ald. Brian Miller (9th) attends a City Council meeting. Miller said he was in favor of the amendments to the housing ordinance but proposed they expire after four years so council can review the efficacy of the ordinance.

Aldermen voted Monday to adopt amendments effective Jan. 1 aimed at increasing the number of affordable housing units in the city.

Before amendments to the inclusionary housing ordinance passed 6-3, several aldermen expressed concern how with effective the measure will be in assisting those in need of housing. The amended ordinance requires developers to set aside at least 10 percent of proposed units to be affordable housing units or face an extra fee.

Ald. Donald Wilson (4th) said he agreed with the sentiment expressed by members of the community at the meeting that affordable housing is a critical focus for Evanston and other urban areas, but the plan will not be impactful enough to rectify problems of homelessness and affordability issues.

“This will have a nominal impact,” Wilson said. “People have expressed concern about a housing crisis and low-income accessibility, and this doesn’t even touch that. It sounds nice, but it’s not really representative of what we are trying to do.”

Barbara Sittler, executive director of Senior Connections in Evanston, said the amendments to the ordinance were a critical first step in addressing housing problems.

“Passing this amendment will just be one small piece for creating equity and parity for people who live here now,” Sittler said at the meeting.

In an effort to offer an avenue for critique of the ordinance’s progress in the future, Ald. Brian Miller (9th) proposed an additional amendment to force an expiration of the amended ordinance after four years, requiring another council vote to continue it. The amendment failed 3-6 because of concerns it would discourage developers from choosing Evanston as a building site.

In defending his proposal, Miller said it is unlikely developers will leave Evanston because of the amended ordinance because of the competitive nature of the real estate market.

Ald. Ann Rainey (8th) said she was most concerned with the lack of communication with possible future developers in the city despite the impending implementation of the measure at the beginning of January. Rainey stressed the importance of thinking about the time constraints in relation to the time it takes to build units.

Mark Muenzer, the city’s community development director, said it is likely most developers will opt to pay extra fees instead of building affordable units based on other community models.

However, Rainey noted that fees already placed on developers have not resulted in constructive change to affordable housing the city.

“I would like to remind the council that all fees in lieu so far have not created one unit of affordable housing,” Rainey said.