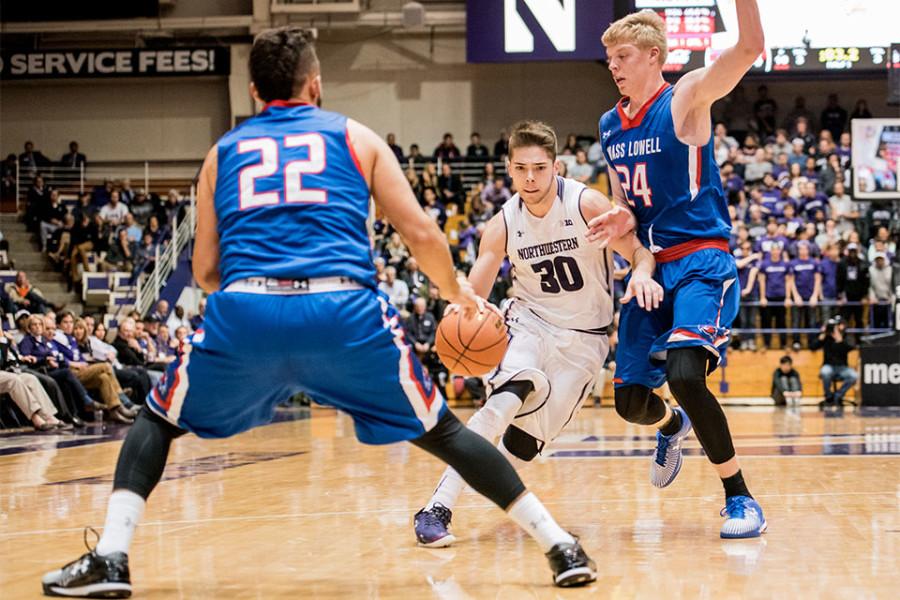 Bryant McIntosh looks to split a pair of defenders as he attacks the rim. The sophomore guard scored a career-high 32 points in NU’s 3-point overtime victory.

Northwestern’s undefeated season continued Friday after the Wildcats edged out Columbia, 83-80, in overtime.

The Cats (3-0) didn’t lead in the game until freshman forward Aaron Falzon made a free throw with 3:36 remaining in overtime to put them up 75-74. Then with just under a minute remaining in the game, senior guard Tre Demps hit a 3-point shot, followed by a jumper from sophomore guard Bryant McIntosh to give the Cats an 82-78 lead over the Lions (1-2).

“(I’m) still trying to figure out how we pulled it off,” coach Chris Collins said. “The numbers, analytically would probably prove to be a little bit of an anomaly that we won that game.”

Despite NU coming away with the victory, the Cats had a slow start against the Lions. NU allowed Columbia to shoot seven-of-17 from 3-point range in the first half, as well as committing nine first-half turnovers.

NU went into halftime on the wrong side of a 9-2 run, trailing the Lions 35-28. Collins said he was disappointed with the team’s first-half performance.

“We were getting our butts kicked and then we made a great run and tied it at 26,” Collins said. “I thought we were back in the game, and then we had to sub a little bit. We didn’t defend well and then they (Columbia) go into the half with a seven-point lead.”

After getting outscored 9-4 in the first four minutes of the second half, NU’s offense picked up, finishing regulation shooting 62 percent from the field and 60 percent from three.

McIntosh led the team with a career-high 32 points and said along with Demps, the guards did a good job of attacking the basket to get easy layups.

“Their big wasn’t up very high so I felt like if I could get the guard rubbed into the screen, I could set the big up and attack the basket,” McIntosh said. “That’s how I got a couple fouls, got to the line a couple times and also got layups.”

The Cats’ guards led the team’s offense, combining for 54 of NU’s 83 points. Demps scored 22 points in the win, after scoring only a combined 24 points in the Cats’ first two games.

Demps played the entire 45 minutes. Collins played sophomore Scottie Lindsey only seven minutes. With both Olah and junior forward Sanjay Lumpkin fouling out of the game, the Cats had to deal with a limited rotation.

“I felt pretty good,” Demps said. “The hardest part is the beginning of the game because the tempo is so fast. But once the game slows down and calls are being made and teams are running half-court sets, it’s a little bit easier to kind of catch on.”

After Lumpkin fouled out, the Cats were trailing 66-58, when Collins turned to sophomore forward Gavin Skelly. Skelly, who did not play in the Cats’ last game against Fairfield, finished with 5 points and two blocks.

After the Fairfield game, Skelly said Collins told him to be prepared to play a crucial role, and Skelly said he was ready to make an impact.

“(I saw a) lack of energy,” Skelly said. “Columbia even during the whole game just played harder than us… We weren’t playing hard and we had no energy givers out there. That’s one thing why I got recruited and came here because I’m able to do that for this team.”

The Cats play North Carolina, the No. 1 ranked team in the nation, in their next game Monday.

“Well it’s going to be pretty challenging,” Collins said. “From first-hand experience, I know. I had the opportunity to compete against that program for a lot of years and have nothing but amazing respect for coach (Roy) Williams and everything Carolina basketball stands for.”