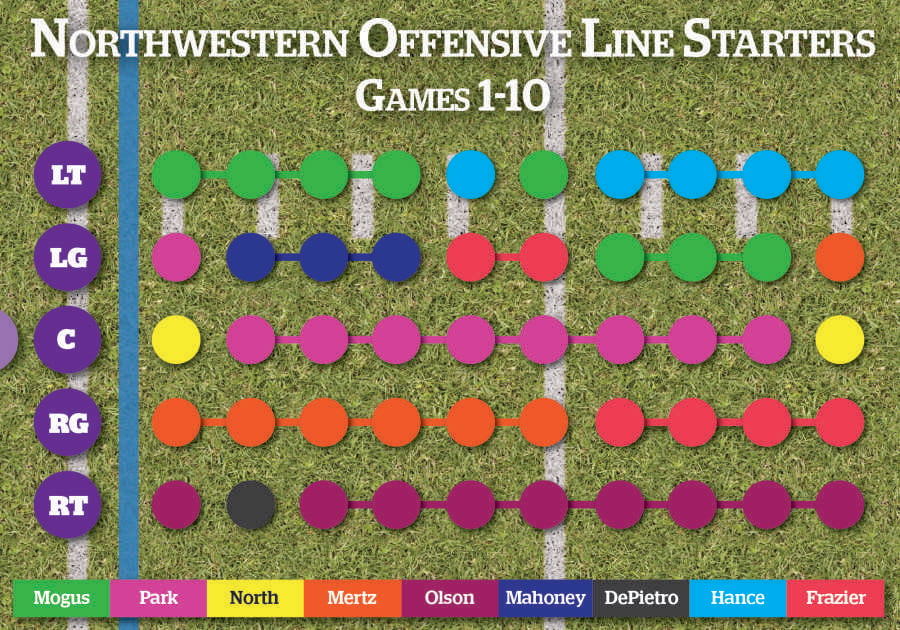 Northwestern has played 10 games this year and used seven different combinations of starters along its offensive line. Not one of the five positions has remained constant throughout the season, with injuries, intentional shuffling and poor play all juggling the offensive front.

But through it all, NU’s men in the trenches have managed to maintain a sense of cohesion as they try to keep the line operating at peak performance.

“If the last name on the jersey is different,” coach Pat Fitzgerald said, “and the jersey number is different at left guard or right guard or center or either tackle, you’re expected to go out and execute fundamentally.”

That Fitzgerald has been able to substitute players so often is a testament to the offseason preparation of the offensive line. The coach emphasized an increase in “competitive depth” during the offseason, and that’s clearly been the case with nine different players seeing regular action and four making starts at more than one position.

And far from being a concern for the coaching staff, the position group being in flux is seen as a positive by offensive line coach Adam Cushing.

“You look at a guy like (redshirt freshman) Blake Hance,” Cushing said. “He was forced into action a couple times due to injury and ultimately won the job. He probably doesn’t do that if he hadn’t been rolled in a couple of times.”

Hance has indeed stabilized the left tackle position, especially in the absence of injured senior Geoff Mogus, but all the shuffling hasn’t necessarily led to better play. The entire offensive line has struggled this season in spite of, or because of, all the changes.

Football Outsiders ranks NU in the bottom half of the FBS in each of its running-related offensive line statistics. The Cats are exactly average in adjusted line yards, a metric which measures their running success based on their opponents, and rank 112th and 108th, respectively, in power success rate and stuff rate, two statistics which measure NU’s effectiveness at the line of scrimmage.

The traditional stats follow suit. The Cats rank a middling seventh in the Big Ten in average yards per carry and are second-to-last in the conference with just 12 rushing touchdowns this season. NU ranks slightly above average in pass protection, according to Football Outsiders, which isn’t very reassuring considering the line is blocking for an especially fast quarterback in redshirt freshman Clayton Thorson.

But some recent numbers actually point to an uptick in success for the blocking unit. Sophomore running back Justin Jackson seemed to disappear against Michigan, Iowa and Nebraska, three teams with notoriously bulky defensive lines, but has exploded in the two games since for 302 yards on 52 carries and just his second rushing score of the season.

Senior lineman Matt Frazier said the offense has added a few wrinkles to its scheme in recent weeks, but that the performance of the line still comes down to the basics.

It may be that the Cats have finally found the right mix, though the starting five is again uncertain after the injury of senior Shane Mertz, slated earlier this week to start Saturday against Wisconsin.

But regardless of continued performance, the fact that the offensive line has been able to weather so much remains a testament to the chemistry of the unit as a whole.

“It doesn’t matter who it is,” Fitzgerald said. “You have to step up.”