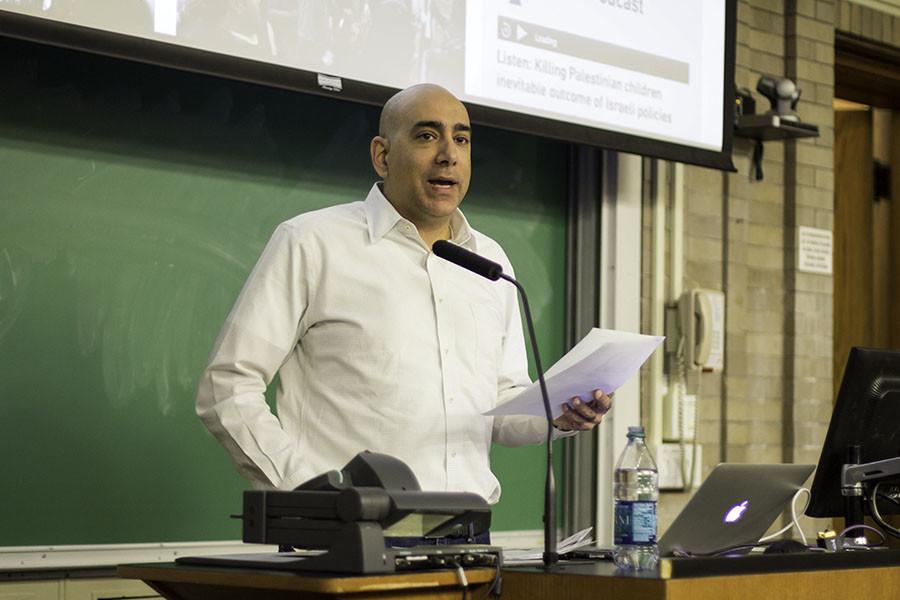 Pro-Palestinian activist Ali Abunimah presents a speech on Israeli-Palestine tensions in a classroom at Swift Hall. Abunimah, who made headlines when his talk at Evanston Public Library was canceled and reinstated two summers ago, returned to Northwestern’s campus on Thursday for a Students for Justice in Palestine event.

Ali Abunimah, co-founder of online publication Electronic Intifada, and Northwestern Students for Justice in Palestine teamed up Thursday for a discussion on Israel’s occupation policies and the resulting retaliation from Palestinians in the area.

Abunimah, a pro-Palestinian activist, came for the SJP discussion in an effort to answer questions relating to the recent violence throughout Palestine. During the discussion in Swift Hall, the author addressed how recent terrorist attacks around the world mirror events that have been taking place between Israel and Palestine for several years.

Abunimah, who had found himself the center of a censorship controversy when Evanston Public Library canceled, then reinstated his talk during a summer of heightened conflict in the Israel-Palestine region, said he was happy to address Evanston residents and NU students once more. About 70 students, faculty and community members attended the event.

Starting with the 9/11 attacks that brought terrorism into the limelight, Abunimah said he thinks that although countless atrocities make headlines around the world, similar occurrences in Palestine remain ignored as media outlets focus on Israel’s side of the story. However, Abunimah declared that the issue of apartheid between Israel and Palestine has escalated enough to merit international concern.

He then walked the audience through what he said was the basic path a Palestinian citizen takes when he or she is accused of a crime by the Israeli government.

“The person has not been convicted of any violent act . . . Yet the punishment is delivered not merely to them, but to their family, their children and their neighbors,” Abunimah said. “In just the demolitions that occurred this week, 47 Palestinians were made homeless, 20 of them children, and half of them in homes that weren’t even targeted.”

Abunimah noted that even though few Palestinian individuals were targeted in the demolition bombings, far more suffered as bystanders. This method of attack, defined as collective punishment under the fourth Geneva Convention, he said, violates international law.

“It’s very explicit that collective punishment is banned,” Abunimah said. “You cannot punish someone for a crime that they have not been convicted of.”

The discussion continued with Abunimah addressing what he said was more lenient enforcement of the law for Israeli citizens compared to others, and said that few crimes committed by Israelis reach a court, and of those that end in convictions, the punishment incurred is far less severe.

Abunimah cited the July 2014 beating of Palestinian-American student Tariq Abu Khdeir in Jerusalem. He said when the boy was repeatedly kicked, shoved and punched by two masked Israeli officers for simply being outside, the Israeli court only convicted one of the officers. Even more shocking, Abunimah said, was the punishment for the one: 45 days of community service.

Were this act to be committed by a Palestinian to an Israeli boy, Abunimah said he thinks Israeli forces would have acted without a court conviction and would enact a far more violent punishment.

The talk concluded with Abunimah stating that there is still hope for Palestinians if Israeli forces are willing to reform their judicial system.

“We have the option to do justice . . . change the laws that discriminate against one group or another, and begin to rebuild a society that is worth living in for everybody,” said Abunimah. “Despite everything, I still believe this is possible in Palestine.”

Two students attending the talk expressed their interest in the topic and how their backgrounds have allowed for them to view both sides of the Israeli-Palestinian conflict.

Communication sophomore Mia Grindon said she was intrigued to hear about the issue from a pro-Palestine perspective.

“I am personally very interested in this,” said Grindon. “I wasn’t exactly sure what I would be getting out of it other than knowing that it was SJP and therefore another perspective on this issue that I haven’t been as exposed to before. I have been actively seeking out the other side of the story.”

Weinberg sophomore Jacqueline Torres chimed in, noting how she found it refreshing to hear the story from a new point of view.

“I’m originally from L.A., so all I ever heard was pro-Israel. But here, all of a sudden it’s pro-Palestine, and now you’re hearing a lot more from the other side,” Torres said. “Listening to the examples (Abunimah) used that you really don’t think about was just really interesting.”