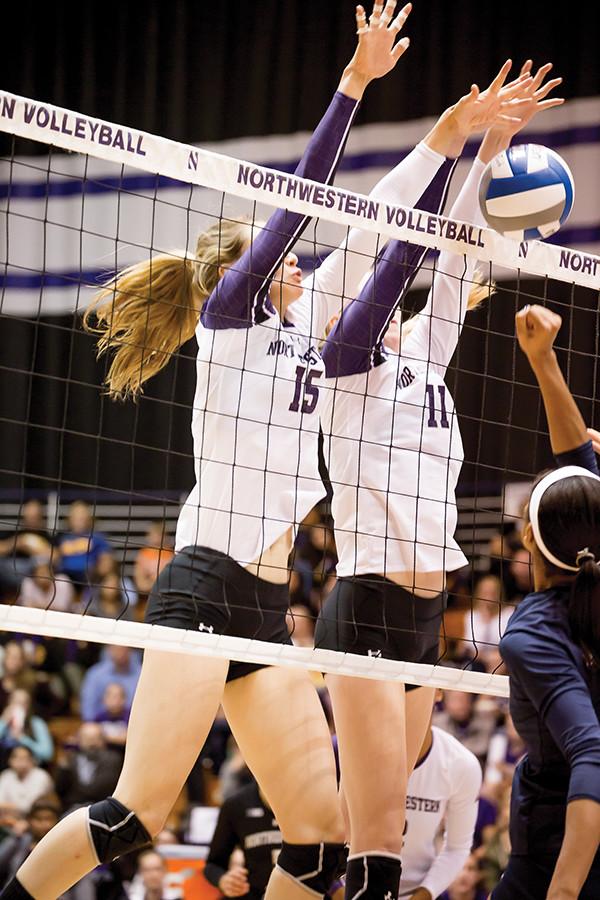 A pair of Wildcats leaps for a block. Northwestern is hoping to snap a five-game losing streak as it takes on Iowa on Saturday.

Northwestern’s inconsistent season is careening toward its merciful end.

On the heels of a five-game losing streak, the Wildcats (13-15, 5-12 Big Ten) head into their final three games staring at the very real possibility of finishing with their lowest win total since 2008. NU has won 16 games in four straight seasons and five of its last six, but reaching that sweet 16th victory is highly unlikely in 2015.

Saturday’s matchup against Iowa (12-18, 2-15) and next weekend’s season finale versus Maryland (13-18, 3-14) are winnable games, but NU faces No. 4 Penn State (24-4, 13-4) next Wednesday. The Nittany Lions are currently on their first losing streak of the season and the Cats upset them in Evanston last month, but the upcoming rematch in Happy Valley will provide a tough challenge as NU hasn’t won a road game since September.

Coach Keylor Chan said his team will be taking the home stretch one match at a time.

“Our team knows we’re good. It’s been very frustrating,” Chan said. “Our team will have another opportunity against Iowa. I was telling (them) that in the last five games we’ve played some of our best volleyball.”

A huge component of NU’s struggles, which Chan has talked about profusely over the course of the season, is its schedule. The Cats have the toughest schedule in the country and the Big Ten, perennially the best volleyball conference in the country, has had at least seven teams ranked in every top-25 list since Week 1.

Only the Pac-12 comes close to the Big Ten’s dominance. The west-coast based conference has had at least six ranked teams in each poll and matched the Big Ten with nine schools listed in the top-25 at least once.

Iowa, the Cats’ next opponent, has been one of the worst teams in the Big Ten all year, however. The Hawkeyes dropped their first 11 conference games, including a 3-1 loss to the Cats last month, and sophomore hitter Symone Abbott said she is happy to finally be facing a weaker team.

“If we play like we did in the first three sets (against Michigan State) against Iowa, it’ll be easier to beat them,” Abbott said. “Iowa isn’t Michigan State, obviously. We just need to just come out and play them like any other team, and we’ll be just fine.”

Abbott has been the poster child for NU’s inconsistency in 2015. Following multiple subpar performances recently against Illinois and Minnesota, Abbott has turned in two straight games with a hitting percentage over .340 and registered a career-high 25 kills against the Spartans on Wednesday.

One of Abbott’s front-row counterparts, sophomore Gabrielle Hazen, has been extremely impressed with how the team has handled itself during this season’s tough times. Hazen said she hopes the team finishes out the regular season on a high note.

“We are all striving to reach for the same goal,” Hazen said. “Everybody talks about just being one point better, so it helps better the team. Everyone is stepping up and just being more aggressive, which has helped us be a lot better.”