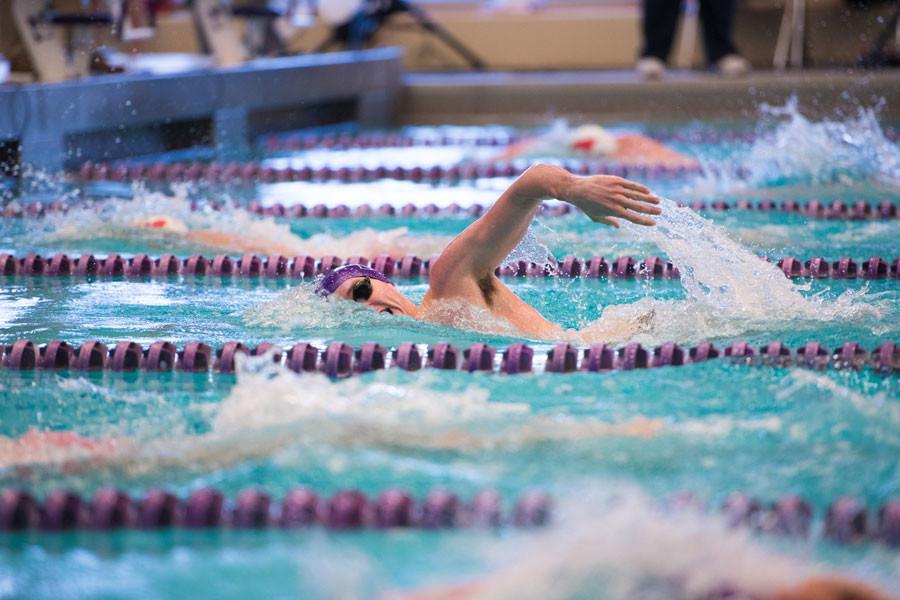 Carter Page reaches for his next stroke. The freshman swimmer will be able to compete in many different races this weekend as the Cats host a five-team event.

As Northwestern prepares to host the three-day TYR invitational this weekend, the team anticipates achieving some of its fastest swims outside of the Big Ten Championship meet.

“I can assure you that most of the guys will get best times for the season, which is going to be awesome,” captain Almog Olshtein said.

Olshtein, who recently had a strong showing against the University of Wisconsin, taking both the 50 and 100 freestyles, played a key role in the Wildcats’ second place TYR finish last year.

In contrast to the seven teams that the Wildcats previously hosted, this year’s TYR invitational will feature only five schools. Among these teams are Michigan State University and Grand Canyon University, two teams Olshtein said would be tough competition.

Formatted similarly to the Big Tens, the meet will present athletes with the opportunity to have multiple swim experiences in the same race and to practice events that they will be competing in toward the end of the season, coach Jarod Schroeder said.

“It’s a good gauge of how the first half of the season has gone,” Schroeder said.

By giving swimmers the opportunity to compete under the preliminary-final format characteristic with the Big Ten Championships, Schroeder hopes that the invitational will provide his team with the boost in confidence needed to succeed going forward.

Schroeder said the former is especially true for the younger swimmers as they continue to adjust to the college meet setting and gear up to compete against squads that typically wear his so-called “champion suits.”

Ultimately, the TYR invitational, which remains the largest meet of the year, serves as a fitting conclusion to the first half of 2015-2016 season, Schroeder said.

“It’s different, it’s fun, we get more chances to compete and we’re going to have good competition so it’s going to be fun,” Olshtein said.

Despite this lively atmosphere and the fact that the Cats won’t taper for the meet, the squad plans to swim hard, Schroeder said.

Freshman Carter Page agreed with his coach and said he hopes to swim faster than he has in previous meets. Though Page typically focuses on the 500 and 1000 freestyles, he said the TYR invitational will provide him with the opportunity to practice his 200 freestyle, an event he has only competed in once this season.

Such an aggressive swim style will be key to NU’s success this weekend, as they will be challenged with maintaining a high level of performance over a tiring three-day period, Olshtein said.

“A lot of it is just approach,” Page said. “You just kind of have to understand that no one is going to feel good on the third day and you got to be the toughest one out there.”