‘And we get Chick-fil-A’: An oral history of the Northwestern football’s viral sensation 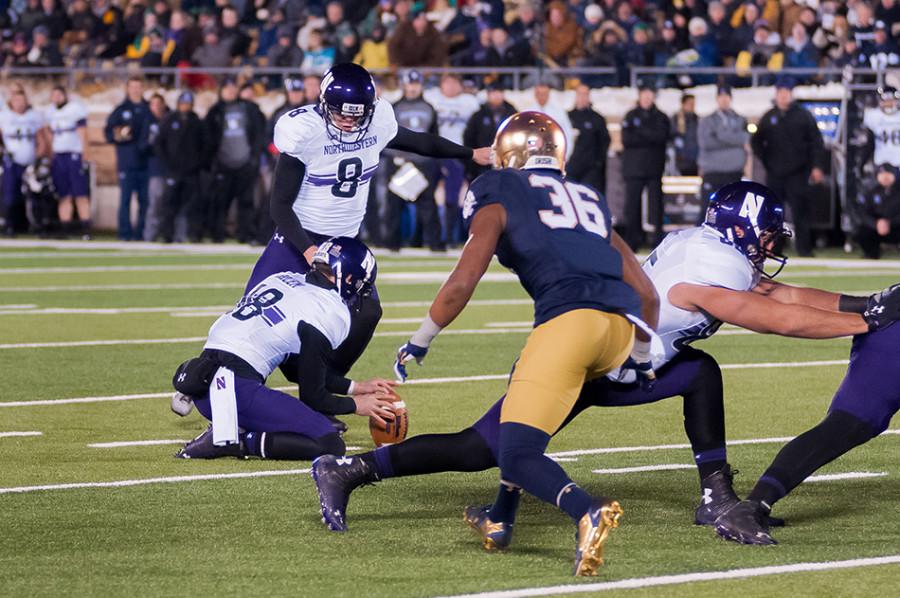 Northwestern players and fans will long remember the Wildcats’ thrilling 43-40 overtime win over Notre Dame in South Bend, Indiana, a year ago last weekend, but they also won’t soon forget what happened next.

Minutes after Jack Mitchell’s game-winning field goal split the uprights, the triumphant NU roster streamed down the tunnel and toward the locker room, past a table lined with red and white bags containing fried chicken sandwiches.

Observing the scene was Jeff Parrott, a South Bend Tribune reporter freelancing for the Associated Press that night. In a cell phone video lasting a little over a minute, Parrott captured an absurd and hilarious procession of excitement that has now been viewed nearly 275,000 times on YouTube, an avalanche of joy best summed up by offensive lineman Ian Park’s memorable words, “Oh sh-t, Chick-fil-A.”

Paul Kennedy, assistant athletic director for communications: The interesting thing is, that was lined up right outside our locker room, and Notre Dame Stadium, the locker-room setup is a little unusual: both teams come down the same tunnel. So postgame, if you’ve got security there they’re focused on Notre Dame’s half of the stadium, so there wasn’t anybody to look at the fact that there was a reporter right outside the locker room, where they probably shouldn’t have been, recording our guys. Obviously it was kind of a serendipitous oversight on our part.

Chick-fil-A was not Northwestern’s typical postgame meal but rather a treat suggested by coach Pat Fitzgerald. The Chick-fil-A nearest to Notre Dame Stadium sits 3.5 miles away in Mishawaka, Indiana.

Cody Cejda, director of football operations: I work directly with our sports nutritionist Katie Knappenberger, and the two of us decide what we’re going to have for most postgame meals. But going into that week, coach Fitz grabbed me and said, “Hey, I want Chick-fil-A for the guys afterward. The guys love Chick-fil-A.”

Pat Fitzgerald, coach: I like Chick-fil-A (laughs). I was given the options of what we were going to potentially get there, and I think I asked the Leadership Council what they would prefer to have, but it was a no-brainer for me. I would rather have Chick-fil-A than some of the mystery stuff we get on the road. I didn’t know it would become a viral experience for people.

Parrott: There’s always a different restaurant that has food on the table for the visiting team to eat, and it’s always interesting to see which restaurant it’s going to be. So it was Chick-fil-A, and these kids just started coming up the tunnel and noticing the Chick-fil-A before they got into the locker room, and one of them started to yell, “Ay, Chick-fil-A, I love Chick-fil-A,” and it just kind of caught on with each guy that came after him. So I whipped out my phone and just started shooting. … There were probably a couple players that said it before I got my phone out and got it turned on.

Six seconds into the video, offensive lineman Eric Olson walks by the camera and glances at the bags of Chick-fil-A on the table. Seconds later, a voice just off-screen yells “And we got Chick-fil-A, this is the best day ever.” A year later, Olson proudly confesses that the voice belongs to him.

Eric Olson, sophomore offensive lineman: It’s me, it’s me. “And we got Chick-fil-A, this is the best day ever.”

We were all so pumped. Everybody ran on the field, we sang the fight song, we’re all happy running off the field, I turn the corner, I see those white and red bags, and it just got the best of me.

Following Olson’s exclamation, a number of other players chime in, including defensive linemen Max Chapman (“ah, Chick-fil-A!”) and Xavier Washington (“And we got the Chick-fil-A!”).

Max Chapman, junior defensive lineman: The thought that’s always in the back of our minds is, “What food are we going to have on the way back?” There’s not a lot of Chick-fil-A in Chicago — there’s one downtown, but it’s hard to get to, and there’s none in Evanston — so it’s safe to say a lot of us go a long time without getting Chick-fil-A. About as long as it had been since the last time Notre Dame and Northwestern played back when Fitz was a player, that was the same drought from when most of us had Chick-fil-A. So to see Chick-fil-A presented as an opportunity for us, that was truly a special moment that will go down in Wildcats history as really living up to the name “the Cardiac Cats,” because all of our hearts were racing at that moment.

Xavier Washington, freshman defensive end: Coming off that win, after that field goal goes in, you never think that anything could make that moment any more special, but when we turned the corner and I saw those bags with the red chicken on them, I was so excited. It was like a new breath, it was like a new game was about to start. It made the moment even greater, and I didn’t think that was possible.

Chapman: I feel like each response was just genuine. The inner joy from each person was just unleashed at that moment.

Perhaps the funniest reaction to Chick-fil-A comes 33 seconds in when Park, points at the bags and exclaims, with endearing earnestness, “Oh sh-t, Chick-fil-A.”

Ian Park, sophomore offensive lineman: After any game, win or lose, the whole team is hungry. There’s no denying that. Usually we get something local, depending on where we are, or something that tastes bad. On that particular day, I see Chick-fil-A, and everyone starts freaking out. The last time we had Chick-fil-A after practice or after a game or something like that was at the Gator Bowl (in January 2013). … I got really excited and might have screamed an obscenity or two.

Parrott: It just seemed funny to me. These kids had just upset Notre Dame, and they pulled off this come-from-behind victory in overtime, and they’re all excited about Chick-fil-A.

Parrott uploaded the video soon after the game (He had posted to YouTube only once before, three years prior, and accidentally uploaded the Chick-fil-A video three times), and it quickly began to spread. Bleacher Report was the first major news outlet to post the clip, and before long it had been shared across the Internet.

Parrott: The video just struck me as funny, and for some reason I just thought to upload it to YouTube. I don’t usually do that. … So I don’t think I had any expectation that anyone would even see it. But the views just kept growing.

My son is 13 years old, and he and I were cracking up as the numbers kept going up and up and up. And then the next day it was on ESPN, and they had credited me, with my name up on the screen when it was on ESPN, so I had friends across the country that saw it and called me.

Olson: I had no idea anyone was filming until I saw it later. It got it sent to me by a bunch of people. Everyone thought it was hilarious.

Park: A lot of my friends posted it on my Facebook wall, which wasn’t cool because I thought I was going to get in trouble because I said the “s-word” on camera. I thought the coaches would bring it up or something like that, but they were cool with it, since we won.

Matt Frazier, junior offensive lineman: The next morning we came in for film, and we pulled it up in the o-line room and we all watched it together and laughed.

Kennedy: My first thought was probably, “I’d rather they not be cursing on video.” But then I laughed real hard. … I saw a lot of happy faces on the field, but I don’t know if I saw any happier faces on the field than what I saw in that video when they realized they were getting Chick-fil-A.

Chapman: My first thought was, “That would be a fantastic Chick-fil-A commercial,” but I know with (NCAA) compliance rules that would never happen.

Those bags of chicken made NU players a viral sensation and cemented Chick-fil-A permanently in Cats lore (The team ordered Chick-fil-A again this season following a win at Duke). But one crucial question went unanswered in the now-famous video from that memorable night in South Bend: Did the sandwiches live up to expectations?

Washington: It was beyond expectations.

Chapman: Most importantly, it was a winning chicken. The chicken would have been proud.

Parrott: Those kids had so much adrenaline coursing through their veins I think they would have been that excited about bologna sandwiches.

Olson: Everything tastes good after a win, but Chick-fil-A tastes even better.