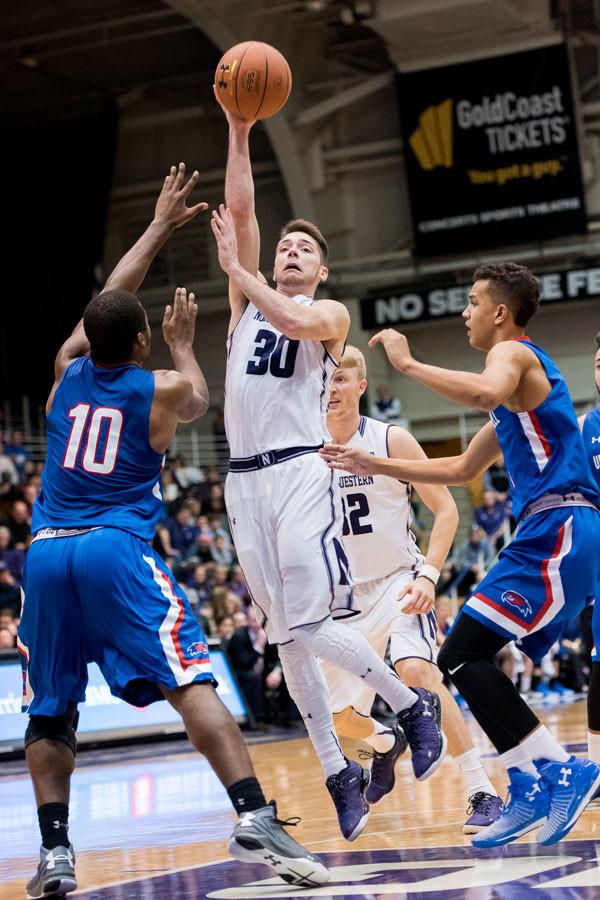 Bryant McIntosh looks to deliver a pass in the paint. The sophomore guard dished out eight assists in the Cats’ season-opening win.

Northwestern’s next game will come against a winless team, but that doesn’t mean it will be a cakewalk.

The Fairfield Stags (0-2) will visit Welsh-Ryan Arena having lost to Yale and No. 1 North Carolina so far this season in two close matchups. Coach Chris Collins said because both of Fairfield’s tight losses came on the road, traveling to Evanston won’t faze them.

“I thought for 30 minutes they went toe-to-toe with Carolina,” Collins said. “You look at their record and it says 0-2. Well one of the games they played the number one team in the country and the other game they played Yale which may end up being a top 25 team.”

When the Wildcats (1-0) tip off at 7 p.m. Wednesday, they will begin a four-game stretch that takes place over a seven day span. Although on paper Fairfield may seem like the weakest of those four opponents, Collins said the Stags’ quality losses make them as tough as anybody this early on the schedule.

For the Stags, senior forward Marcus Gilbert will be looking to follow up on his 25-point performance against the Tar Heels. Cats’ sophomore guard Bryant McIntosh said he thinks stopping Gilbert is going to be one of the biggest challenges come Wednesday.

“Gilbert is a very capable scorer,” McIntosh said. “To have 25 in the Dean Dome is really impressive, so we’re going to have to be ready to play … their record isn’t indicative of what kind of team they are.”

As part of its nonconference schedule, NU will be competing against many teams with relatively shorter big men. For example, the Cats have five players on the roster listed at 6-foot-8 or taller, while Massachusetts Lowell’s tallest athlete is listed at 6-foot-8.

Fairfield isn’t as small but only has two 6-foot-8 forwards and three 6-foot-9 players. Collins said earlier in his career, senior center Alex Olah would have had trouble guarding shorter opponents but has improved remarkably in that area.

“They have more skill guys, more guards, and you have to really communicate,” Collins said. “It just messed (Olah) up from both ends, because he’d get frustrated, they’d pull him away from the basket, they’d drive by him. I thought (Friday) was one of his best games just for that.”

Additionally, Olah won his first ever Big Ten Player of the Week award thanks to a 21-point, 12-rebound line against UMass Lowell. Friday was Olah’s third career 20-10 game.

“I (came) into this year with the thought of having double-doubles every game,” Olah said.

Olah is also the first Cat to win Big Ten Player of the Week since Drew Crawford in February 2014.

With game number two on the horizon, McIntosh agreed with Collins that last Friday’s sluggish start could be attributed to opening-night “jitters.” However, he said he doesn’t think such nerves will carry over to Wednesday.

“There’s always jitters any time you start off the year, just because you’ve worked so hard over the offseason and you just want to get going,” McIntosh said. “We didn’t hit shots (last Friday) and it hampered us a little bit with the fact that we just got out of character.”