Northwestern grieves for lives lost during attacks in Paris, Beirut and Baghdad 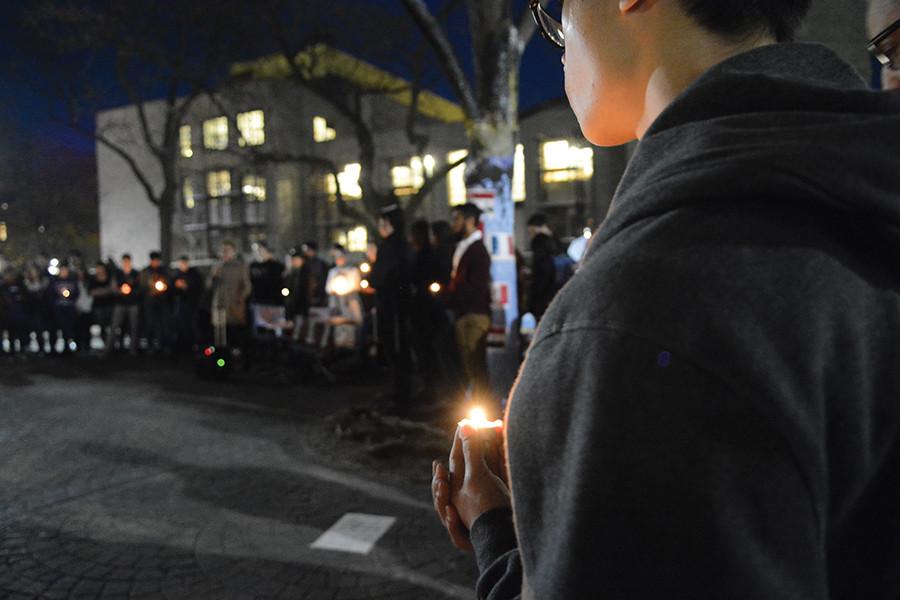 Members of the Northwestern community gather and pray at The Rock at a candlelight vigil. International Student Association and Interfaith hosted the vigil Sunday evening to support those who were affected by the recent terrorist attacks worldwide.

More than 70 members of the Northwestern community gathered at The Rock on Sunday evening to share prayers and thoughts at a vigil hosted in light of recent acts of terrorism, including attacks in Beirut, Baghdad and Paris.

Students and members of the community gathered shortly before 5 p.m. when the candlelight vigil began. The International Student Association organized the vigil with Interfaith, an engagement initiative that creates space for students with different faiths to interact at NU.

“It’s a difficult situation to address, especially because there have been so many events over the past few days,” Medill sophomore and ISA member Eish Sumra told The Daily. “I don’t think that (the administration) addressed it in an entirely public way, and maybe they should’ve a little bit more. That’s why we’re holding the event today.”

Participants of the vigil, mostly students, stayed quiet as they helped each other light the candles and formed a wide circle amid the glowing flames.

“Whether it’s Paris, Beirut, Syria, Iraq or Turkey, Kenya, all the events are equally devastating,” Sumra said as he opened the vigil. “We’re really thankful that you all came out to support them and show your solidarity.”

Tahera Ahmad, director of Interfaith engagement and associate chaplain at NU, expressed her condolences and denounced the attackers for using violence in the name of Islam.

“As the Muslim chaplain on campus, I would like to share with you my personal belief that terrorism has no religion,” Ahmad said. “It is the result of destructive ideologies that seek to take advantage and exploit the weakest members of society regardless of their socioeconomic faith, religious background.”

Ahmad said injustices occur in Chicago and on campuses across the country. The University stands against the systemic injustices that occur locally and globally, she said.

Followed by a prayer, Weinberg senior Emery Weinstein spoke on behalf of the Jewish community, sharing her experience working at the Organisation for Economic Co-operation and Development in Paris, as well as her values stemming from her Jewish beliefs. Raising concern for people’s increasing fear of strangers in and outside France, she said people should ask themselves how they can be more welcoming.

“We can fight injustice through the audacity of nonviolent resistance, through saying hello to a stranger, through staying steadfast in trust, and without any fear, we can eventually begin to love another,” Weinstein said.

Connor Steelberg, a Weinberg senior from France, asked people at the vigil to keep their minds open toward the victims of attacks in Paris and all refugees who are fleeing from violence.

“The most we can do is never forget that currently there are people going everyday through absolutely horrendous things, who, day after day, have to wake up in ISIS-controlled territory, wondering whether or not they will live to see the next day,” Steelberg said.

University President Morton Schapiro said he is keeping in his prayers not only the victims of the attacks worldwide, but also the Muslim population affected by the stereotypes associated with the religion. He closed the vigil with a moment of silence. The crowd eventually dispersed in a somber mood, with some exchanging hugs and condolences.

“It’s our chance to pay our respect to the victims and their families and loved ones,” Sumra said. “It’s a way to show solidarity and hopefully provide the student body with an outlet for support.”

Interfaith will continue to foster and create spaces on campus to unite students from different backgrounds and hold dialogues, Ahmad said.