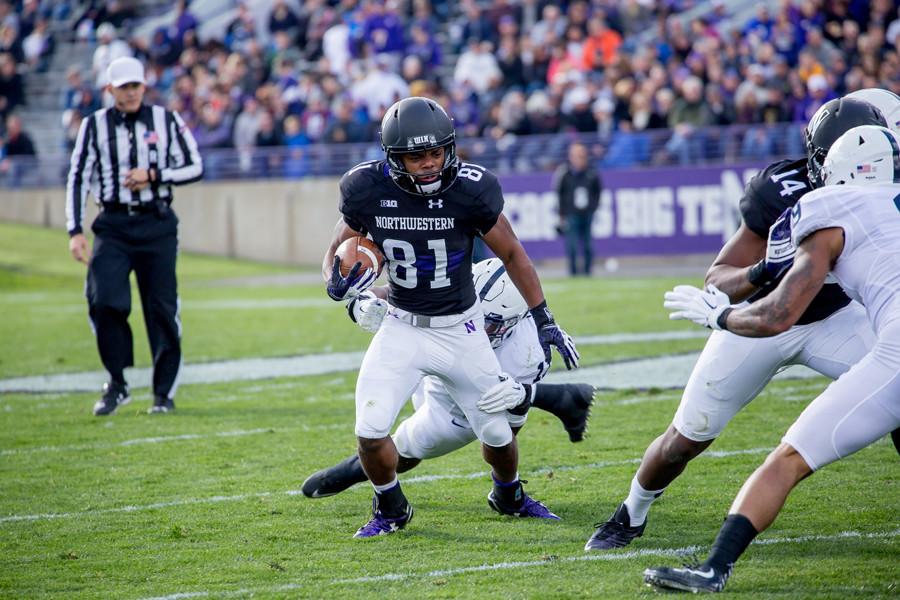 Freshman Jelani Roberts runs behind a block thrown by senior Christian Jones. Despite contributions from players with many different skillsets, the Northwestern receiving corps as a whole has struggled this year.

Northwestern is a decent football team. They’re bowl eligible, have beaten some good teams and boast a legitimate defense.

But they aren’t a great team.

They’ve got a very good defense. With sophomore running back Justin Jackson, redshirt freshman quarterback Clayton Thorson and a plethora of other talented running backs on the roster, they also have a solid running game. What is the biggest difference, then, between NU and conference heavyweights like Ohio State, Michigan State and Michigan?

The issue with NU is its lack of balance offensively. The Cats simply don’t have the playmakers at wide receiver to pose a consistent threat to opposing defenses.

The Wildcat receivers have faced one-on-ones all year and haven’t made defenses pay with regularity, plagued especially by dropped passes.

Until the Cats recruit and develop big play receiving threats, teams will continue to play the NU offense exactly like they do now, stacking the box against Jackson and blitzing Thorson to death. When the Cats run into big front sevens, they’ll see repeats of the performances against Michigan and Iowa.

The Cats entered the season with what seemed like a promising trio of senior receivers in Jones, Miles Shuler and Cameron Dickerson. But only Jones remains as a consistent producer, and even he has had his fair share of struggles coming off of an ACL injury in 2014. Jones doesn’t give himself a pass, however.

“(It hasn’t gone) as good as I would like it to, honestly,” Jones said. “There was a span of games where I wasn’t playing as well as I should have. Any time you go out there, I try not to let the injuries weigh on any kind of opinion I have on my play. So, if I’m being honest with myself, not as good.”

Jones, who has struggled with drops, said with the rehab and other things he had to deal with, he took his fundamentals for granted, and they slipped as a result. Jones has worked extra with Thorson after practice in recent weeks, and Tuesday was no different.

“I try to keep the rhythm up. I wish I wasn’t doing it so late, that I was doing it every week like I should’ve been,” Jones said. “You just have to do as much as you can.”

Cats fans can hope that Jones, who caught his second touchdown of the season against Penn State, is back to his old self for the final four games of the season. NU will rely on him to play like a No. 1 threat outside. But where else do they go to for production, outside of senior superback Dan Vitale, who leads the team in receiving yards?

Shuler, while having a good year on special teams, has been a disappointment at wide receiver, catching only 10 passes on the season and losing snaps to freshmen Flynn Nagel and Jelani Roberts, whose route tree thus far has been limited to fly sweeps and screen passes. Dickerson is barely coming back from an injury himself and has only caught three balls on the season. Both haven’t shown a consistent ability to get open, and as a result the offense has suffered.

Meanwhile, junior wide receiver Austin Carr has come up big on multiple occasions. While he has just eight catches on the season, Carr has made them count, converting several huge third downs for the Cats against one-on-one coverage.

With the number of big plays Carr has made outside and in the slot, he should continue to see his role increase in the final four games of the season and going into his senior season. The X-factor down the stretch will be the play of Dickerson and Shuler. As disappointing as both have been, they are both healthy and capable. With just four games left in their NU careers, they still have a chance to turn it around and end the season on a high note.

Looking ahead to 2016, NU fans can’t help but be a little worried at the lack of veteran experience. Especially with Vitale and Jones departing, the Cats have no guarantees for production next season. The core for 2016 is looking like juniors Carr and Mike McHugh, in addition to Nagel, Roberts and any freshmen who can be added to the mix.

“We’re excited about their futures,” wide receivers coach Dennis Springer said regarding Nagel and Roberts. “Those two kids showed throughout Camp Kenosha that they can compete and help us. First part of the season with Flynn, you started to see him make some plays. … He does some things naturally at the receiving position that I really like. Jelani is a young man that’s extremely intelligent on and off the field. He’s got great quickness, great speed, and he’s getting better as well.”

“They’re all hard working. Extremely hard working,” Jones said. “Even the guys that aren’t playing right now who nobody really talks about — Cam Green, Charlie Fessler, Chris Cliff — all of those guys.”

A lot rides on the development of those youngsters and Cats fans should start to get some idea of how they’re doing during spring practices.

As for now, it’s hard to argue against the Cats having the worst receiving corps in the Big Ten, yet they find themselves in contention for a New Year’s Six bowl. With how the young talent on defense and in the run game has played this season, the Cats might be one or two pieces away from truly competing with the big boys. Until then, they’ll be decent at best.