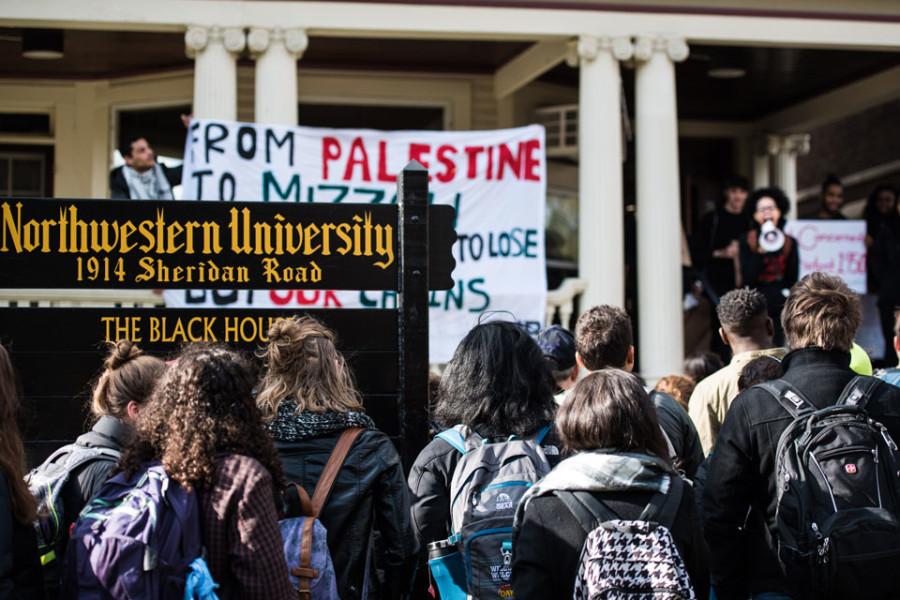 Students gather outside the Black House on Friday to protest institutional racism at Northwestern and other universities. The protesters later moved to Henry Crown Sports Pavilion, where they spoke out at a groundbreaking ceremony for a new athletic facility.

Northwestern students disrupted the groundbreaking for the lakeside athletic complex Friday afternoon as the final stop in their protest in solidarity with black students fighting for racial justice at the University of Missouri and Yale University.

The disturbance was part of a call to action that convened about 300 students, faculty and community members, beginning at the steps of the historic Black House. The plan for the protest was publicly announced on Facebook late Wednesday night by For Members Only coordinator Yjaden Wood and widely shared by students.

After the rally at the Black House, the crowd made its way up Sheridan Road with a stop at Technological Institute, culminating in the interruption at the groundbreaking ceremony where University President Morton Schapiro was set to speak.

The demonstrators had met outside the Black House, where members of FMO, Students for Justice in Palestine, Inspire Media, Alianza, Asian Pacific American Coalition, MEChA de Northwestern, African Students Association and CaribNation, among other student groups, led a rally in support of Missouri and Yale students against racial injustice.

“Northwestern students of color send their support and solidarity to the students at the University of Missouri whose peaceful protest against racial injustice on their campus has been met with threats of violence and terror,” said Gwendolyn Gissendanner, a SESP sophomore and FMO’s Associated Student Government senator, at the start of the rally. “Their struggles against racial injustices affect their mental, psychological and, in many cases, physical health, and it cannot be ignored or silenced.”

At 12:15 p.m., those who were described as being from the African diaspora screamed in unison with students gathered for a counterpart protest at the University of Chicago, followed by a moment of silence.

Students then spoke about their experiences being black at Northwestern, saying University administrators often have a limited response to the school’s racial issues and to black students’ presence on campus. The protesters also denounced the low representation of and lack of resources for black students at Northwestern, particularly in STEM fields.

Students were also angered by an email Schapiro sent early that morning to the University community about “troubling events” on college campuses nationwide. They said the email, sent at 2 a.m. Friday, failed to adequately address black students’ experiences.

“We got an email last night,” Gissendanner said. “Do you realize that email said nothing?”

The email was sent six days after black football players at Mizzou announced they would not play until their university president, Tim Wolfe, resigned.

“I’m just curious as to why that time was the most appropriate, six days later in the middle of the night versus the day of, the day after,” Wood, a Weinberg-McCormick senior, told The Daily. “Six days is an incredibly long time.”

Participants then marched up Sheridan Road, chanting variations of “From NU to Mizzou, we care about you!” with fists raised in the air. When gathered at Tech, they criticized Schapiro for his absence from the rally.

Then the group strode, chanting, to the groundbreaking ceremony at the Crown Sports Pavilion’s basketball courts.

University officials, including an NUPD sergeant, and Crown Sports Pavilion staff closed a curtain, formed a barrier and turned up the ceremony’s music, but students continued to shout their list of demands. Those appeals included a full cessation of planned restructuring at the Black House, construction of a building for Campus Inclusion and Community, creation of a U.S.-centric diversity requirement at NU for all majors and the creation of a resource center and technology hub tailored to black students.

The crowd pushed past the curtains and interrupted the ceremony, where multiple athletes, alumni and members of the general public awaited a speech by Schapiro.

Medill junior Sierra Boone, president of NU’s chapter of the National Association of Black Journalists, who participated in the rally and protest, said the day’s events were symbolic of what has been happening to black students on campus for years.

“The fact that we decided to go to that space of the groundbreaking and invade their space and make them uncomfortable is just symbolic of how they make us feel on an everyday basis,” she told The Daily. “They could never even feel like we feel because this is a one-time thing and it was like not even an hour long that we were in there.”

Most audience members remained in their seats as students marched to the front of the room and read their demands. Students left Crown Sports Pavilion after about 25 minutes and gathered in the field outside, where they linked arms and thanked everyone for attending the protest.

After most of the protesters left the room, the groundbreaking event continued, and Schapiro addressed the interruption in his remarks.

“Part of me felt a certain pride,” Schapiro said. “That our students had the guts and the organizational ability to march here from a rally they were having… and under real risk, came here and confronted us that way.”

Vice President for Student Affairs Patricia Telles-Irvin talked to the remaining protesters following this gathering and said discussions of the black student experience at Northwestern would follow.

Cari Chambers, FMO’s vice-coordinator of programming who participated in both the rally and protest, said whether or not the audience received the message, the act of standing up for their demands was empowering.

“When we walked out of the room, they got to sit back in their chairs, take a deep breath and move on with the event that they had,” the SESP junior told The Daily. “But when we walked out of that room, screaming ‘Black Lives Matter,’ we still wear our blackness, proudly, every single day.”

Wood said in his four years at NU, Friday was his happiest, though the reason the community came together was painful.