Volleyball: Wildcats’ hopes for a win uprooted by Golden Gophers 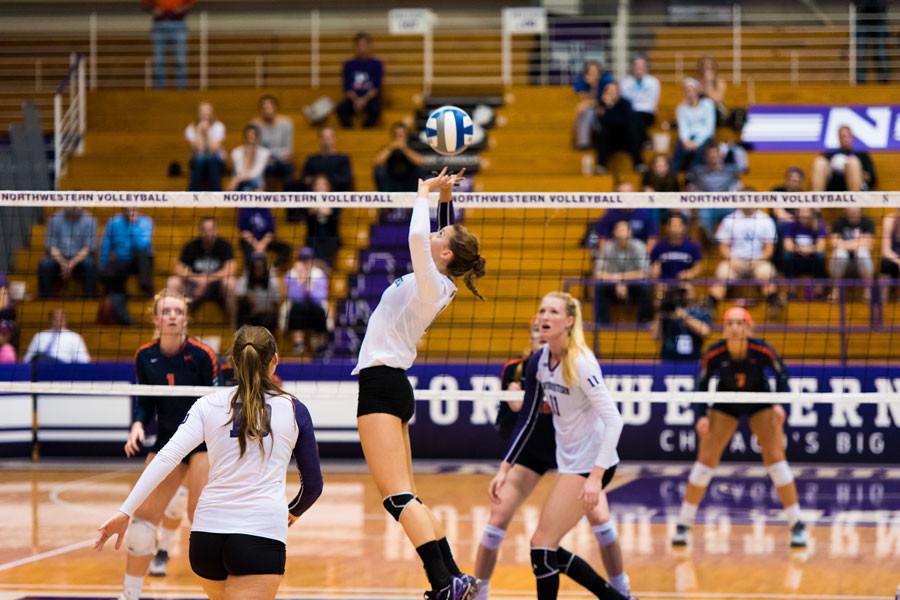 Taylor Tashima sets up a teammate for a spike. The sophomore setter had 53 assists against Minnesota, the most she’s had in a conference game all season, and her third highest total on the year.

Once again, home court provided no advantage for Northwestern.

Even with an impressive third set win, NU was not able to do what was necessary to capture the upset victory. But even in a losing effort, there were positives for the home team.

Junior outside hitter Kayla Morin was an all-around leader on Wednesday night, bringing in an ace, two assists, 13 digs and 16 kills. Morin said NU needs to play with more aggression if it wants to knock off the nation’s best teams, like Minnesota.

“Just being aggressive, swinging at it,” Morin said. “We have to turn that aggression into smart aggression. That aggressiveness is what won us that third set.”

What tripped the team up Wednesday was a myriad of defensive errors, which was also a problem last week against No. 16 Illinois. Junior outside hitter Maddie Slater said the number of defensive errors the team made slowed it down against a squad as defensive as the Golden Gophers.

“We didn’t adjust as fast as they were to us,” Slater said. “In the coming matches, we need to focus on getting other teams out of system, so we can focus on defending better.”

The one time the Cats were able to truly handle the Golden Gophers’ adjustments was during the third set. With their backs against the wall, they were able to go tit-for-tat with Minnesota and win the game.

Associate coach Kirstine Jensen said she was pleased with the with the team’s level of play all night, but especially in the third set.

“Offensively, (our middles) were just ridiculous,” Jensen said. “Kayla really stepped it up today, and that was huge for us to be in the match.”

The team held its own at times, slowing down the Golden Gophers at the beginning of the first set, taking the third set and keeping it close throughout the fourth set. But as the case has been most of the season, NU was unable to do what it needed to come away with a victory.

With just five games remaining in the year, the team has only won a third of its matches in conference play and is .500 overall, which is not where it wants to be with so few games left before the NCAA Tournament.

However, Jensen said the team is showing marked improvement. Matches like the upset victory on Oct. 10 over now-No. 1 Penn State (24-2, 13-2), are evidence the team can do what is needed to defeat elite teams. With No. 17 Purdue (19-7, 10-5) up next on the schedule, the Cats have the perfect opportunity to show the win against the Nittany Lions was not a fluke.

“I think we’re ready; we’re right on the cusp of it,” Jensen said. “We’re ready to push and do it. I’m just excited.”