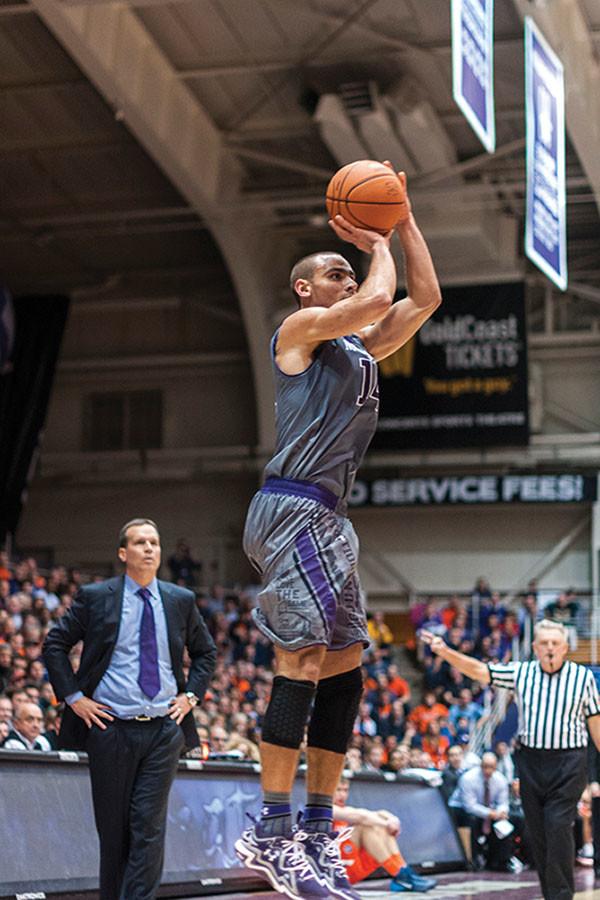 Tre Demps raises up for a jump shot. The senior guard will be looking to build off of a junior season in which he averaged 12.5 points and was a consensus honorable mention All-Big Ten selection.

Chris Collins, entering his third season as NU’s coach, has won the opener in each of his first two campaigns but said he always gets some jitters before the first game.

“You come into a first game, everybody’s a little bit nervous,” Collins said. “Coaches, players — because you want to get off to a great start, you want to play well.”

In last year’s season opener, NU (15-17, 6-12 Big Ten) allowed Houston Baptist University to take a 12-2 lead before calming its nerves and pulling out a 7-point victory. Collins said he hopes that’s not the case this year.

Collins explained that a fast start could come from forcing some early turnovers and getting quick fast break points, and some easy buckets could relax the team and “let the air out of the balloon.”

This season’s first opponent, the River Hawks of UMass Lowell (12-17, 6-10 America East), are a program in the third year of a transition from NCAA Division II to Division I. The River Hawks are an extremely young team with sophomore forward Jahad Thomas leading a roster in which eight of 13 players are freshmen.

UMass Lowell is the first of many low-pedigree opponents NU will face in its nonconference slate. Sophomore guard Scottie Lindsey said he thinks the Cats can do a much better job in that portion of the schedule than last year, when they finished 9-4 heading into Big Ten competition.

“We want to come out with double-digit wins this time around,” Lindsey said. “We’ve got big games, playing North Carolina (in the CBE Hall of Fame Classic), but we definitely want to take care of the other teams that we have before that.”

Senior guard Tre Demps agreed that merely winning games against weaker opponents is not enough. He said not only does the team want to win these games, but also they want to win big.

Four Cats scored in double figures in an 80-64 exhibition win over Quincy last Thursday, but Collins said he wasn’t pleased with his team’s effort on the defensive end.

“We had some real breakdowns,” Collins said. “(Quincy) punished us for it, which was good. We were exposed a little bit, so we’ve been working a lot this week to clean that up and get our defense back on track.”

Collins said nonconference games are big because after so much practicing and scrimmaging, the team needs to get out and execute in game situations. He added that the nonconference schedule will serve as a test for the team to figure out its rotation and learn how to manage the group.

That rotation will look a little different than expected this season with the loss of sophomore forward Vic Law. It was announced on Wednesday that Law will undergo surgery on a torn labrum in his left shoulder and miss the entire season.

Law will still have three years of eligibility remaining when he returns and was focused on the positives of this situation.

“This is a year that I can get better, get fully healthy and be the biggest cheerleader on the sideline for the rest of my teammates,” Law said.

Many forecasted Law to be an important player for the Cats this year, but Demps said he believes the loss won’t derail a potentially promising season.

“It definitely hurts, but I think at the same time we can rally around each other and still make something special out of this year,” Demps said.