Women’s Basketball: Improved Wildcats are anything but underdogs 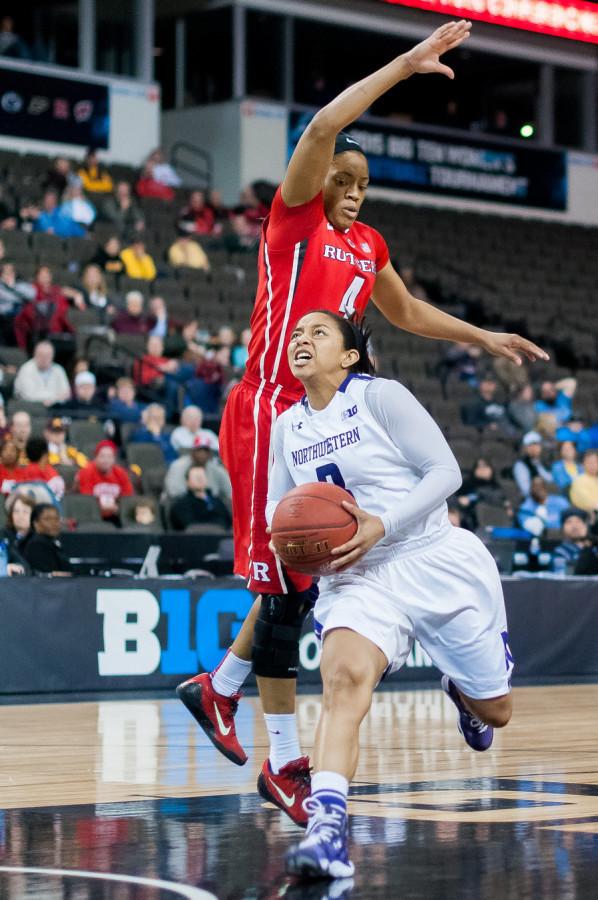 Ashley Deary charges to the basket. The junior point guard will try to help Northwestern gain respect this season amid higher expectations.

When the Wildcats take the floor against Howard on Sunday, they will command a certain respect unlike any Northwestern squad in recent history.

It’s not just because the Cats open as heavy favorites against an opponent that won just four games last season. Rather, it’s a league-wide respect that should follow them going forward — a respect that comes after a 23-9 campaign that featured an NCAA tournament bid for the first time in 18 years.

More than anything, it’s the type of respect reserved for college basketball’s elite programs, territory that the Cats, ranked 19th nationally, find themselves in after returning the bulk of their rotation players from last year’s watershed campaign.

“Last year we kind of snuck up on people, and so we had, going into the season, a great mentality of ‘we don’t just want to be mediocre. We don’t just want to be average like we had been in the past,’ and that kind of catapulted us,” senior guard Maggie Lyon said. “This year we might have more of a target on our back. … We have to come out twice as hard because people are gunning for us.”

Junior forward Nia Coffey returns to lead the team with an added year of experience. One of the top players in the Big Ten, Coffey was unanimously named by conference coaches to the preseason All-Big Ten team in October.

At the same time, NU, who finished fourth in the conference last season, was tabbed as the third best Big Ten team by media, a harbinger for the respect that will continue to come.

“When I took the job, we were voted 12th, and there was 11 teams in the league,” coach Joe McKeown joked at Big Ten Media Day in October.

McKeown has been rebuilding the program since joining the Cats in 2008 after a legendary tenure at George Washington.

After seven seasons, six of which were spent hovering between eighth- and tenth-place finishes in the Big Ten, he finally has a squad that is expected to contend with the nation’s top teams from the onset.

“Last year it kind of started,” McKeown said. “Maggie and Nia were a big part of it. They walk in the gym now, ‘we’re not losing anymore. We’ve got to play like we’re down by 10.’”

Having an experienced roster will help the case, but the team’s goal — to win the Big Ten championship — will still require hard work, even with rising external expectations.

Maryland, who won the conference tournament and finished undefeated in the Big Ten last year, enters the season ranked ninth in the country. Ohio State is ranked sixth and should prove to be an even tougher opponent than last year.

But, for the first time in the McKeown era, NU is being placed in the same category as those elite squads.

“Maryland obviously is an outstanding team,” Rutgers Hall of Fame coach C. Vivian Stringer said at Media Day in reference to the top teams in the conference. “Certainly Ohio State. The promise of Michigan State and the work that they’re doing, it just promises to be something special. And, of course, Northwestern was really tough this year as well.”

Yet, even with unprecedented attention, McKeown wants his squad to continue to play with an edge and retain its focus.

Having coached Team USA at the World University Games in the college offseason, McKeown is well-aware that elite expectations can serve as great motivation.

“(Coaching Team USA) kind of gave me that chip on our shoulder that I want our players to have: that we’re Northwestern and we’re still fighting for respect, even though we’re not a secret anymore,” he said. “I just wanted them to have that attitude and that mentality that … we still got a lot of work to do and let’s keep all the noise out. I think they’re buying in.”