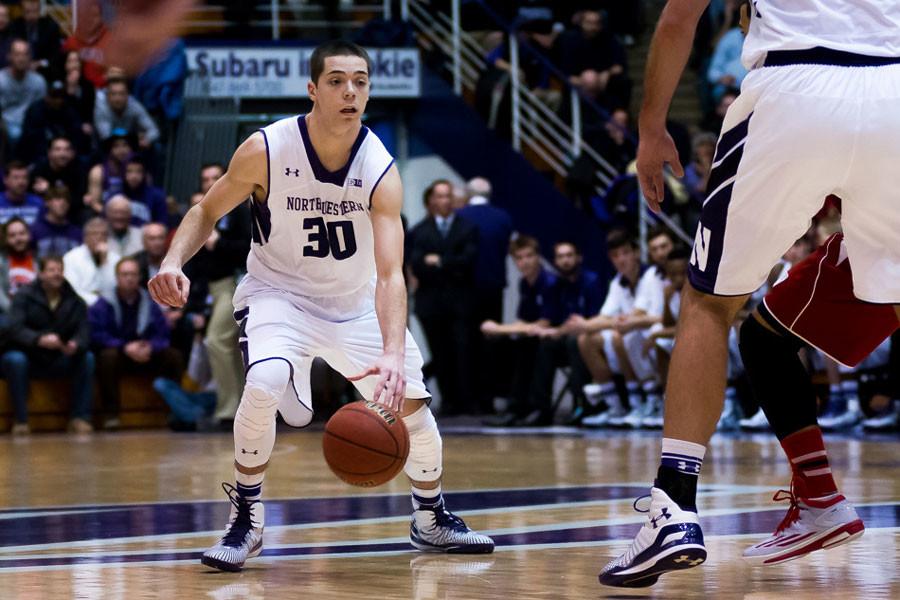 Bryant McIntosh reads the defense looking to create a play. The sophomore guard will be looking to build off of a successful freshman campaign that saw him set a program record for assists by a freshman and make the Big Ten All-Freshman team.

Northwestern’s sophomore class, the first recruiting cohort of coach Chris Collins’ tenure, has high expectations to live up to.

There’s Bryant McIntosh, the starting point guard looking to improve on a freshman campaign that saw him average 11.4 points and 4.7 assists per game; forward Vic Law, the former top-100 recruit trying to make more of a name for himself; guard/forward Scottie Lindsey, the lanky wing developing into a key three-and-D player in the rotation; and forward Gavin Skelly, the surprise contributor in last season’s 2-3 zone searching for a permanent home.

The heat is on, but the Wildcat sophomores know they can handle it.

“Last year was tough because we threw a lot of freshmen into the fire,” Collins said. “They had to learn while they were going through some tough times. … Vic, Scottie, Bryant, those guys played heavy minutes right away. And we lost JerShon Cobb, and it put even more on them.”

McIntosh in particular struggled down the stretch last season, burned by the heavy minutes as well as illness.

“I just wanted to get stronger,” McIntosh said of his offseason focus. “Toward the end I got tired, I got sick, so I’m just taking care of my body and building it up for right now in anticipation for the grind.”

All four players said they focused on adding weight and improving conditioning over the offseason, with frontcourt players Law, Lindsey and Skelly emphasizing it the most. Lindsey said he put on 20 pounds of muscle, and Law believes he’s more prepared for the physicality of the Big Ten season.

The “grind,” as Law called it, is what surprised him most about adjusting to the college game. He had what he described as a “peaks-and-valleys” season last year — playing well during the nonconference schedule but disappearing during the start of conference play — but isn’t letting the weight of expectations get to his head as he strives for consistency in year two.

“I don’t think (being a big recruit) factors into my mind,” Law said. “It’s a little cool fact to know, but every year we’re getting better players. … It’s good to know that I was able to set the standard for Northwestern, that it’s not a bad thing to come here. That’s really the only thing I think about.”

Lindsey, like Law, also struggled with the intensity of the college game at first. He began the year relatively anonymously but eventually made 10 starts, using his long defensive reach and shooting ability to carve out a spot in the rotation.

Lindsey said one of his main focuses before the season was getting ready for what he called the best conference in the country.

“The speed, the physicality, and just playing against the top talent every night is a huge deal. It’s tough,” Lindsey said. “Coming back for our second year, I think all the guys who are sophomores are going to be ready for that.”

With McIntosh running the offense, Law growing into a scoring wing and Lindsey furnishing shooting and defense, the one sophomore without a clearly defined future is Skelly. He saw time at center in the second half of last season as a backup to senior Alex Olah in a 2-3 zone. However, he has been squeezed out thanks to the additions of graduate transfer Joey van Zegeren and freshman Dererk Pardon as well as the transition back to a more man-based defensive system.

Skelly said he’s working on his offensive game and quickness as he transitions to playing forward and believes he’s still a key contributor on the team by bringing energy to the court even if he isn’t getting many minutes.

“My personality is so outgoing and so out there,” Skelly said. “It just relates to how I am on and off the court, just being a high-energy, high-motor guy.”

Beyond individual skill and conditioning improvements, each sophomore also cited the team’s international trip to Spain as a major source of team bonding they believe will help the team win this season.

“It’s a huge chemistry builder,” Law said. “It’s just a really good way to experience new basketball and see where the team is and what strengths and weaknesses need to be worked on.”

Lindsey echoed Law’s sentiments, saying he liked the trip because the team was able to spend more time together and learn about each other while practicing the new wrinkles Collins wants to deploy this season.

The entire team has grown closer, and the Cats’ sophomores remain at its core. That group came to NU with the promise of a brighter future at a historically destitute program, and as their second year together begins, they’re ready to start delivering results.