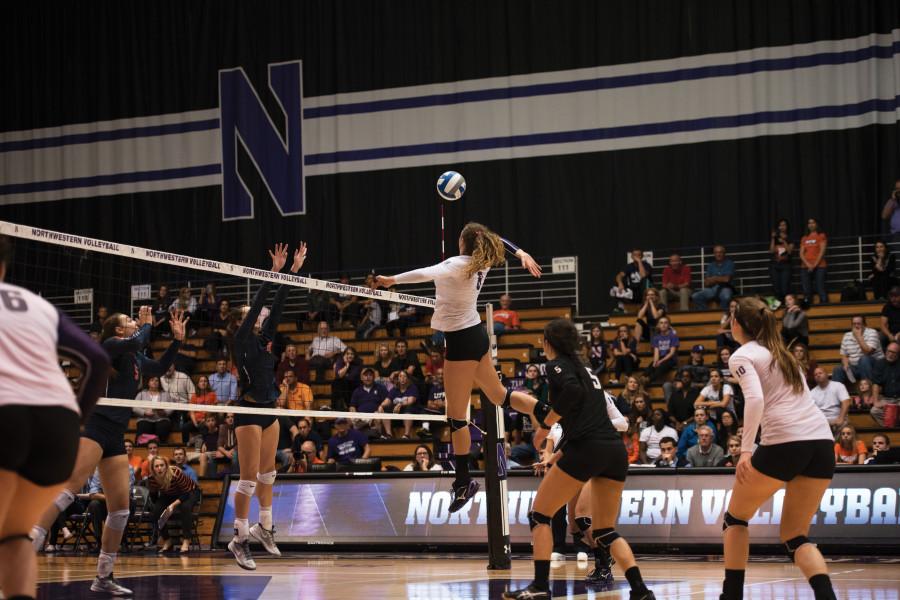 Sophomore middle blocker Gabrielle Hazen loads up for a spike. Hazen had seven kills and seven blocks for Northwestern in a four-set loss to No. 18 Illinois.

Despite its hard-fought battle Wednesday against the same opponent, Northwestern barely showed up in Champaign, winning only one set against No. 18 Illinois on Saturday night.

The Wildcats (13-12, 5-9 Big Ten) appeared to be on a mission for vengeance after their five-set loss on Wednesday against the Fighting Illini (17-8, 8-6). However, the team that stepped onto the court at Welsh-Ryan Arena didn’t seem to make the trip for the rematch in the 3-1 defeat.

Sophomore outside hitter Symone Abbott, who racked up a team-leading 17 kills Saturday, said although the team fought hard, errors brought the Wildcats down.

“If you’re playing and fighting hard, the result is either not making an error or (making) a positive result,” Abbott said. “We need to make sure we’re not giving the team free points.”

Sophomore middle blocker Gabrielle Hazen brought her A-game to Champaign as well, bringing in seven kills, one ace and seven blocks for the Cats.

She agreed with Abbott, saying errors undid NU, but spoke more critically when reflecting on both teams’ less-than-stellar performances.

“Neither team was really on,” Hazen said. “We just had a team where we had more errors on our side. It just came down to execution.”

While the result of the game was not what the Cats had hoped, glimpses of the team that showed up on Wednesday showed through in the third set. NU displayed aggression and focus in the third set to win 27-25.

Hazen said the third set got the team excited, firing them up after the first two disappointing sets. But the fire burned out after the third, as the Cats faded to drop the fourth set 25-18 to lose the match.

NU’s brutal schedule does not let up as the team heads back to Evanston. The Cats have endured five losses in their last six games, and they are gearing up to play No. 16 Purdue and No. 4 Minnesota. Their last matchup with the Golden Gophers (20-3, 13-1) ended in 0-3 loss for the Cats, as did their first encounter with the Boilermakers (18-7, 9-5).

Abbott said the team needs to remember to fight and play hard going into the Minnesota game.

If the Cats can’t cut down the errors that plagued them against the Fighting Illini, it will be difficult to manage the positive results they need. NU’s hitting percentage was just .126 on the evening, well below the team’s .212 percentage on the season.

“It comes down to all being on the same page on the court,” she said. “Some of the skills were just not there. Every team has an off night. Unfortunately, ours was this evening.”