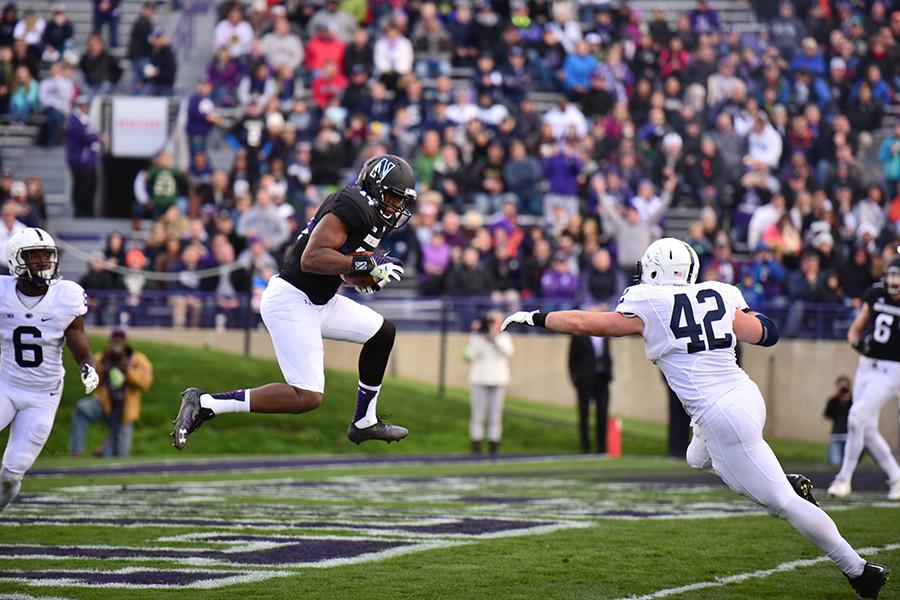 Senior wide receiver Christian Jones catches a touchdown pass in the second quarter. Saturday's game against Penn State resulted in a 23-21 win for the Cats.

After missing two field goals and an extra point Saturday, kicker Jack Mitchell played the hero when he made the game-winning field goal with nine seconds left in the fourth quarter.

“I was being reminded the entire time that the game was pretty much on me,” Mitchell said.

The 23-21 victory against Penn State saw Northwestern lose then regain its early lead. Although dominant in the first half, the Cats made the game close starting in the third quarter, with repeated penalties and pass incompletions until game’s end.

The second-half incompletions came from senior quarterback Zack Oliver, who replaced starting quarterback Clayton Thorson. Following a series of hits, Thorson left the field late in the first quarter with a lower-body injury. After the game, Fitzgerald did not comment on the quarterback’s status.

Oliver, however, facilitated NU’s 20-point second quarter, aided by the return to glory of sophomore running back Justin Jackson.

Jackson ran for 186 yards in Saturday’s game, a career high, and is now ranked 9th on Northwestern’s career-rushing list.

During one drive, Jackson rushed for 75 yards, allowing Oliver to run the ball into the endzone, bringing the game to 13-0.

“(Jackson’s performance) was huge,” Oliver said. “Having him to lean on as an offense as a whole is just a really big asset for us.”

NU’s run game Saturday improved dramatically from previous games, bolstered by plays from running backs Jackson and junior Warren Long. In NU’s previous three games combined, the Cats had collected a total of 245 rushing yards. Saturday’s game alone saw 227. Before he left the game, Thorson showed off his quickness, running for 25 yards total, the most of any player in the first quarter.

The Cats’ offensive success in the first half was echoed in the defense’s play. Penn State did not make it across the 50-yard line into NU territory until halfway through the second quarter. Even then, the Nittany Lions made it only to the 36.

The NU defense was all over Penn State star running back Saquon Barkley, who averaged about 2.1 yards for his 11 carries in the first half. Helped largely by the return of junior cornerback Matthew Harris from injury, NU also broke up passes, forcing Penn State quarterback Christian Hackenberg to complete only half of his first-half attempts.

The momentum NU generated on both sides of the field was disrupted in the third quarter after a Penn State drive littered with NU penalties made it a one-possession game.

After Mitchell missed a field goal, NU was called for roughing the Penn State punter on the following drive, giving the Nittany Lions a first down. Then, the Cats committed a late hit on a sliding Hackenberg, resulting in another defensive penalty.

“On those two penalties, we’re not who we are as a defense,” Lowry said. “After that touchdown, we came to the sideline, regrouped, settled down and just got back to what we do.”

From the third quarter on, the game was anybody’s to win, especially after another Penn State touchdown in the fourth quarter gave the Nittany Lions the lead.

“For whatever reason it just wasn’t clicking (after halftime),” Oliver said. “Probably a lot of that was on me. I could have made some better throws, could have thrown the ball away. … But in the end we came back and we found a way to make a big play.”

Responding to Penn State plays seemed to be the theme of the game.

Along with Mitchell’s comeback field goal, sophomore Solomon Vault returned a kick for 96 yards in the second quarter.

After what coach Pat Fitzgerald called a “hard-fought battle,” the game against Penn State marks further success for a team now 7-2.

“It was not always pretty in all three phases,” Fitzgerald said. “Our guys just found a way in the second half and found a way to get it done.”