Volleyball: Northwestern pushes No. 18 Illinois to five sets in loss 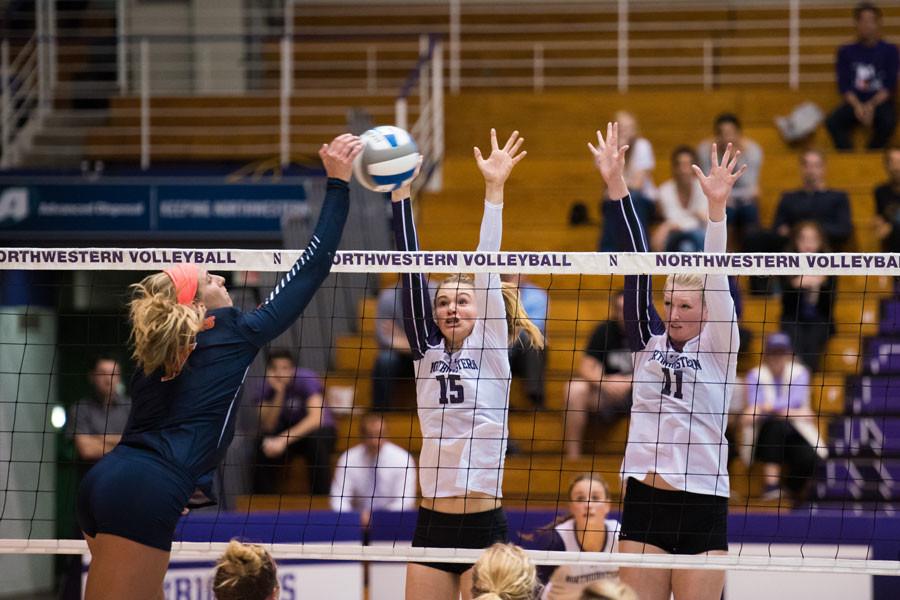 Junior Kayla Morin and junior Maddie Slater form a wall to block a spike attempt. Despite the defensive effort and strong offensive performances from each, the Cats were unable to hold on to beat Illinois.

Despite a 3-2 loss in its first game against No. 18 Illinois, Northwestern proved it has a fighting chance against the Fighting Illini.

NU asserted dominance this evening, showing the aggressive side many of the team members said they have been hoping for. The team totaled 62 kills over the Fighting Illini’s 57, but lacked consistency in hitting to fight off Illinois in the final sets of the game.

Coach Keylor Chan spoke highly of the match, talking about his pride in the team, especially against a team like Illinois.

Although the defensive effort kept the team in the game, and a similar performance could help lead to a victory in Urbana-Champaign this weekend, sophomore outside hitter Taylor Tashima talked about the importance of offense.

“We definitely want to replicate our serving; we got them out of system,” Tashima said. “Just bringing more fluidity to our offense. It’s a game of errors, so definitely just going down there and playing smarter volleyball and getting after it.”

Tashima was a power player on the court with 48 assists, many of which were to junior outside hitter Maddie Slater. The two were on the same wavelength tonight, as Tashima assisted Slater on 12 of her 14 kills of the game. Slater said the two have been working together the past few weeks to up their connection. This is evident on the court between the two women.

Having played the Fighting Illini once serves the Cats well going into the weekend matchup. Slater attested to the good fortune that is getting a second chance against this Illinois team.

“Now that we’ve played them once we know their tendencies, and what they’re good at and what they’re bad at,” Slater said. “In the next few days of practice we’re going to really try to work on those things, so we can take advantage of them this weekend.”

Even without a W on the board, NU gained quite a bit from its hard-fought match this evening. The team kept the Fighting Illini on their toes, despite the team’s Top 20 ranking in the NCAA, which bodes well for the Cats over the weekend.

Though it wasn’t the Cats’ night for a win, Tashima said they brought their A-game, which could mean good things to come on Saturday.

“We came to play tonight,” Tashima said. “It was a long, great, five-set Big Ten game.”