Men’s Soccer: Wildcats’ season on the line against Rutgers 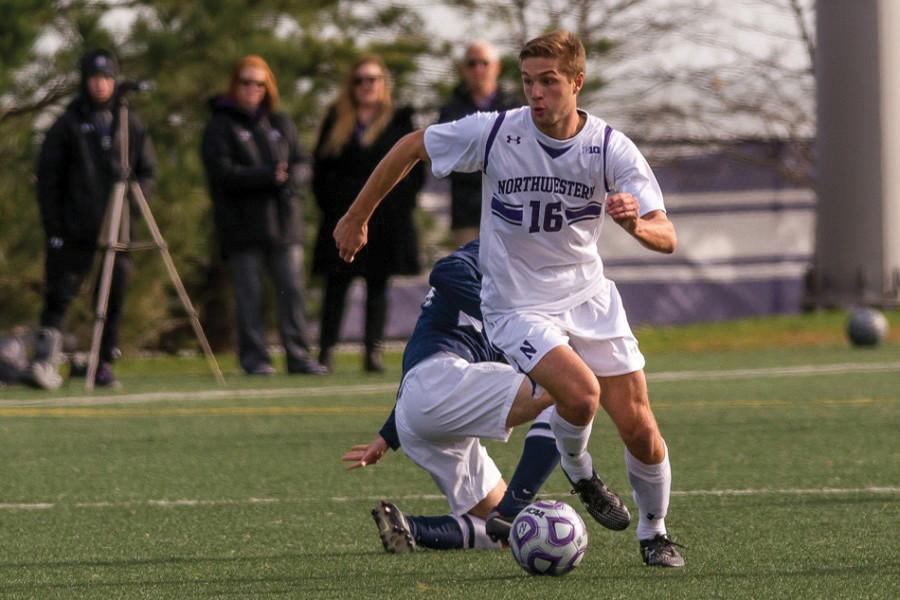 Junior forward Mike Roberge turns upfield. Roberge will look to provide a scoring spark for Northwestern in a must-win matchup against a high-powered Rutgers offense in the Big Ten Tournament quarterfinals.

Northwestern has already played countless matches this season desperately needing a win. On most occasions, the Wildcats have gotten what they needed.

But Sunday’s match against Rutgers in the first round of the Big Ten tournament is a different story: For the first time, a win is absolutely necessary.

“Our backs are on the wall right now,” said senior defender Henry Herrill after his team’s disheartening 2-1 defeat by Wisconsin on Wednesday dropped them to the 5th seed. “We can’t really look back.”

The Cats (7-8-2, 4-4-0 Big Ten) must advance not only through their quarterfinals meeting with Rutgers (11-5-1, 4-4-0) but also through the semifinals — during which they could face regular season champion Ohio State, a team they did beat back in September — to pass .500 and become eligible for the NCAA tournament.

For now, however, NU’s focus must solely be on Rutgers, which won seven consecutive matches until falling at Maryland this week and sliced through the Cats en route to a 4-2 road win in the two teams’ Oct. 16 regular-season meeting.

In that game, the Scarlet Knights scored a goal off a corner kick to take the lead less than four minutes into the match. By the 61st minute, they had stretched the lead to 3-0, and while two NU goals in a five-minute span briefly cut the deficit to just one, a fourth Rutgers strike in the 69th minute effectively ended the Cats’ comeback hopes.

Coach Tim Lenahan noted afterward that the team was forced to deviate from its typically conservative style and found themselves stuck in an unfamiliar game.

“(We were) going end to end with a team much more comfortable going end to end,” Lenahan said. “If this were a football analogy, we were a running team that was forced to throw the ball 60 times.”

Senior midfielder Cole Missimo, then not knowing that he would get another chance to face Rutgers in his collegiate career, said of the game that “it was a tough way to go out because I thought we were definitely a better team than they were.”

He will get another shot against the Scarlet Knights to justify that claim. Along with the rest of the team, Missimo will have to work to stop a highly potent offense seeking to replicate the fast pace of last month’s match.

Rutgers will likely rely on Big Ten regular season scoring leader Jason Wright, who scored one of his 13 goals against NU, to spearhead an attack that led the conference by a wide margin in goals per game.

The Cats nevertheless remain confident after pulling out several crucial wins over the past few weeks and feeling like they deserved a better result than they got in the regular season finale.

“We’ve been through a lot this year. We know we can bounce back,” junior forward Mike Roberge said. “We’ve lost some tough games and come back with big games the next game.”