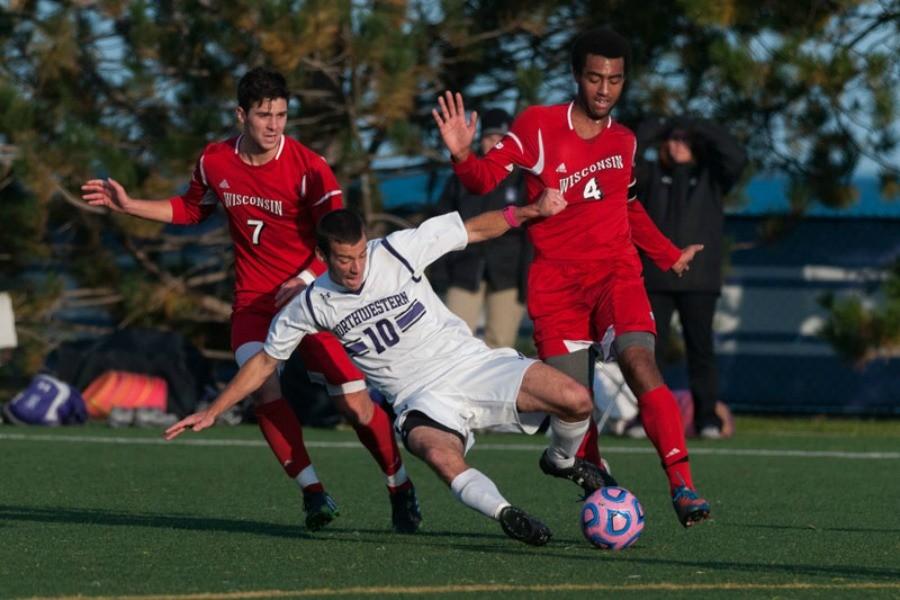 Joey Calistri falls to the ground as he fights for the ball. The senior forward assisted on NU’s lone goal in its 2-1 loss at Wisconsin.

The type of late comeback that has defined Northwestern’s season failed to materialize on Wednesday night.

After surrendering a deflating goal at the end of the first half and then falling behind with less than 23 minutes to play, the Wildcats (7-8-2, 4-4-0 Big Ten) were unable to convert another late surge into an equalizing goal and lost 2-1 to Wisconsin (5-10-3, 2-3-3) to conclude the regular season.

“It was one of the better games we’ve played this year,” coach Tim Lenahan said. “We’ve had a lot of good breaks go our way this year and this was not one of those nights.”

NU broke a scoreless deadlock in the 20th minute, the first time they scored in a first half since Oct. 7, with a swift counterattack following a Wisconsin turnover.

Senior defender Henry Herrill held up near midfield then fed senior forward Joey Calistri, who was making a run down the left side. Calistri dribbled the ball into the box and passed it across the goalmouth to unmarked junior midfielder Mike Roberge, who buried his third goal in four games.

“We had a lot of speed up top, so we knew when we had time to counter that we could,” Roberge said. “Joey played a good ball across the goal through the defense and thankfully I was there to knock it home.”

Wisconsin tied the match in the 41st minute after a series of wild events.

Following a corner kick, sophomore forward Elo Ozumba attempted to clear the ball out of the box but instead struck Wisconsin’s Adam Lauko cutting in front of him, leading to a penalty kick call. Senior goalkeeper Zak Allen saved Mike Catalano’s PK attempt with a diving save toward his left, but Badger forward Isaac Schlenker got to the rebound along the end line and lofted a short cross back across the box that Luc Kazmierczak headed down and in.

Herrill said the goal with just 4:28 left until the break took a lot of wind out of the team’s sails.

“We came out and we were … playing confident. That goal we gave up at the end of the first half really stung,” he said. “If we had gone into halftime with a 1-0 score, it would’ve been easier to stay a little bit more organized in the second half.”

The Badgers found the winner in the 68th minute off the foot of Mark Segbers.

Segbers found inside position on NU junior defender Nathan Dearth after a hard pass from Drew Conner and toed the ball into the corner of the net.

Lenahan attributed the winning goal to a temporary lull in the action that led to the defense getting caught off-guard.

“(We) relaxed a little bit defensively and they were able to spring on us,” he said.

Calistri unleashed a powerful free kick from just outside the box that was stopped beautifully by Remeniuk in the 70th minute. Ozumba then rose up for a threatening chance off another free kick in the 77th, but his header bounced harmlessly into Remeniuk’s torso.

The Cats out-shot their opponent for only the second time this season, firing 13 attempts to the Badgers’ 9, yet fell to 0-2-0 when doing so.

Dramatic wins over Michigan State and Penn State during the past two weeks had positioned NU for a shot at the Big Ten regular season championship entering Wednesday, but Ohio State’s 3-1 win over Michigan extinguished that possibility by halftime.

Instead, the defeat dropped the Cats to a tie for third place in the final standings and the No. 5 seed in the tournament, forcing them to travel on the road for a rematch with Rutgers in the first round at 12 p.m. on Sunday. The Scarlet Knights put a season-high four goals past Allen in a 4-2 victory over NU back on Oct. 16.

The team must win at least twice in the Big Ten tournament — or, in other words, advance to the finals — to reach a .500 overall record for the year and become eligible for the NCAA tournament.

“We realized somewhere along the line we were probably going to have to win two (consecutive) games,” Lenahan said. “We’ve had a challenging season but I think we’re coming together at the right time.”