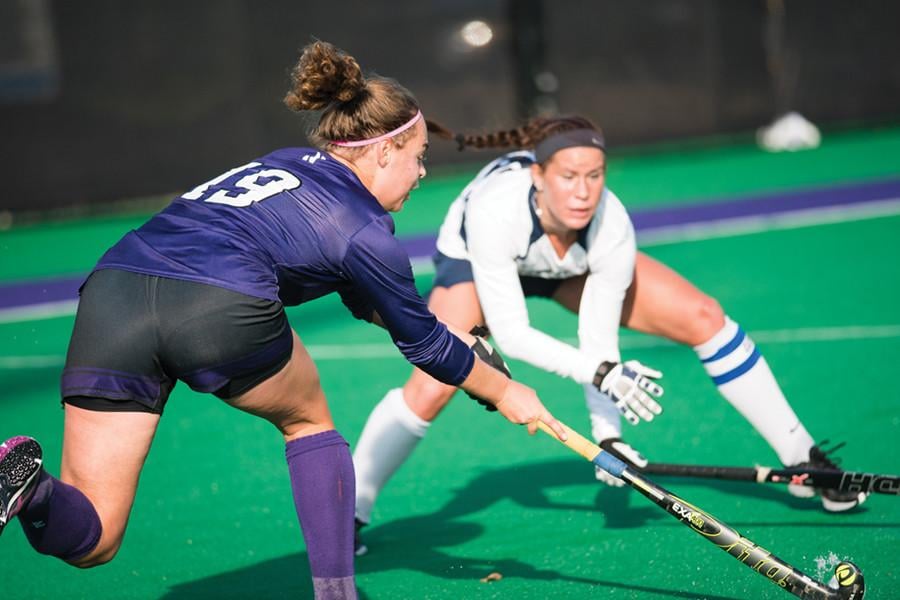 Freshman midfielder Puck Pentenga faces off with a defender. Pentenga and the Wildcats outshot Ohio State 19 to 4 en route to a 4-0 victory in their Big Ten Tournament quarterfinal matchup Thursday.

Once they started moving, the Wildcats did not let their foot off the gas, propelling them to a shutout victory over Ohio State in the opening round of the Big Ten Tournament.

Northwestern (13-7, 4-4 Big Ten), the No. 4 seed in the tournament and reigning Big Ten Tournament champion, attacked the tournament’s No. 5 seed, Ohio State (9-10, 4-4), relentlessly Thursday in the Cats’ 4-0 win in the quarterfinal match. NU started the game off slowly, but following a media timeout, the Cats’ offense started to spark.

“One of their players in the backfield was doing a nice job of distributing the ball so we really tried to cut her out of the play,” coach Tracey Fuchs said. “We really pinched in and congested the field so we could get more intercepts and get to work.”

NU outshot the Buckeyes 19-4 in the game and garnered 12 penalty corners — one of the Cats’ strengths during the regular season. NU scored two of its first three goals off of penalty corners, igniting an offensive frenzy.

“(Following shots) was incredibly key,” Masters said. “In our game plan we wanted to keep executing shots. It’s very like us to get lots of shots and lots of corners but I think we’ve just really been practicing really getting pressure on the keeper for rebounds because we tend to get a lot of second shots.”

This is the second time in less than two weeks the Cats faced Ohio State, and in both games NU’s defense shutout the Buckeyes. NU’s defense held Ohio State to only putting one shot on goal and conceded only three penalty corners the entire game.

“Our goal in that game was to try to get ahead as much as we could because we know Ohio State has a tracking offense,” McCarthy said. “So it’s the kind of thing where they can come back into the game at any stage. It’s a big confidence booster because they have some talented forwards and that is something that we are going to face in the tournament.”

The Cats’ path to defending their Big Ten Tournament title only gets more difficult from here, as NU prepares for a quick turnaround against top-seeded Maryland on Friday. When the Cats last played the then-No. 10 Terrapins on Sept. 18, Maryland came away with a close 3-2 win over NU.

Masters said the team is lucky to have played the earliest game since they will get the most rest of any team in the tournament, and the team is treating Friday’s semifinal game as a final.

“We’re going to rest up and focus and have a look at the game,” Masters said before the team learned it would play Maryland. “We could play anyone. This is the type of tournament where you can’t underestimate anyone. So whoever we play tomorrow is going to be treated as a final. Whether it’s Michigan State or Maryland, we are just going to focus on us for the rest of the day and come out and play tomorrow.”