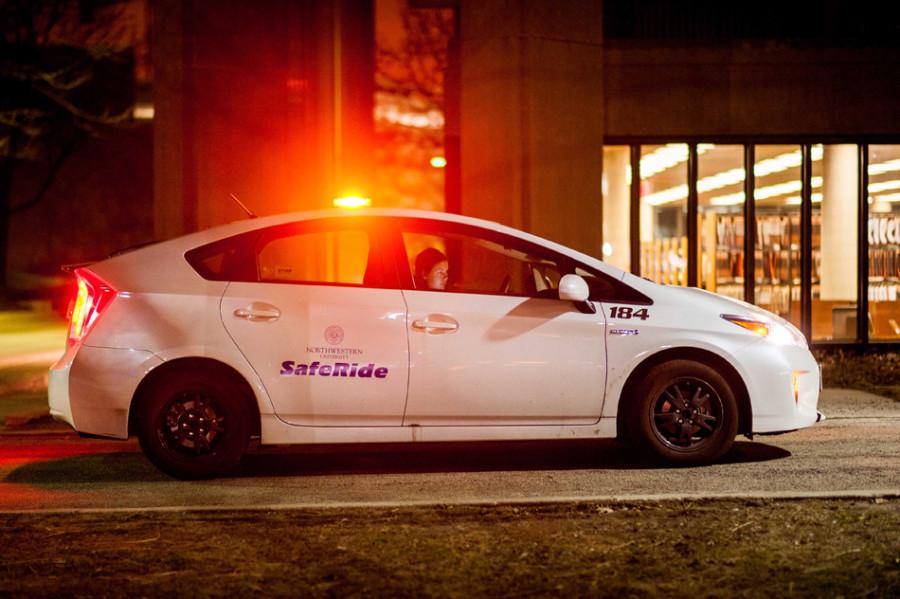 A Safe Ride car sits outside of University Library during the evening. The program designed to transport students safely during the night is still working out issues of high cancellation rates and low staffing this quarter.

Safe Ride introduced the TapRide mobile phone app in April 2014 and subsequently extended its service to the summer. The service, which offers free rides to NU students, faculty and staff as an alternative to walking, operates seven days a week during the academic year from 7 p.m. to 3 a.m. The service provides rides from any location on campus to either on-campus buildings or locations within a coverage area in Evanston, as long as the destination is three or more blocks away.

Previously, students could call a Safe Ride between off-campus locations as well, but that amenity was stopped Spring 2014, the same time TapRide was released.

Currently, members of the NU community can either call the Safe Ride office or use the TapRide app to request a ride.

The service is known for long wait times, which Safe Ride coordinator Bernard Foster said are hard to reduce because the service is insufficiently staffed with drivers at the beginning of each academic year.

When fully staffed, Safe Ride has 40 to 45 employees, eight to 12 of which are dispatchers, he said. Currently, the service has about 20 drivers, he added.

This year, Foster said, Safe Ride saw a decline from last year in the number of applications.

“Based on the things that I can pick up from my drivers and dispatchers, sometimes students will hold off trying to get a job beginning of Fall Quarter because they want to get a feel for how they’re doing academically,” Foster said.

Safe Ride driver Justin Trousdale, a McCormick junior, said drivers are usually busy between 8 p.m. and 10:30 p.m., with a second wave of frequent pick-ups around midnight. Drivers try to pick up a new passenger between every eight and 12 minutes, he said.

“During the off time, we might give ourselves — instead of 10 minutes in-between the rides — 12 or 14, but we are always going to or from a pick-up,” Trousdale said.

Foster said the TapRide app is the biggest recent change to the service itself, allowing users to drop a pin on their location for a driver to pick them up. However, he said the pin has been ending up in various incorrect locations.

“We are still trying to work out issues that we are having with the app as far as the locations are,” Foster said.

Upon TapRide’s release, Foster said, Safe Ride saw high cancellations but determined it was normal because students needed to get used to the app.

“We did find out in the beginning that a lot of the cancellations were due to the wait times being shorter than students had originally thought,” he said.

Following drivers’ inquiries into the cancellations, Foster said he learned that some students cancel ride requests and re-submit them in an effort to get a ride faster. As a result, Safe Ride observed 70 to 80 percent cancellation rates, he said.

Although Safe Ride is still seeing cancellations at a high rate, the rate has gone down to about 60 percent, Foster said.

Other universities have experienced high cancellation rates as well, he said.

Medill sophomore Mai Schotz, a Safe Ride driver, said some riders tell her about problems they experience, such as not being able to drop a pin onto the correct location in the TapRide app. She says she relays the feedback to the dispatcher, who in turn alerts the developers.

Foster said the service will spend more time examining the reasons behind the cancellations.

“Hopefully, we can pin down what’s going on and try to resolve some of these problems if we can, as far as cancellations,” he said. “We want everyone to be able to use the app.”

The structure of the Safe Ride team has also evolved, with Safe Ride dispatchers’ role changing significantly since the TapRide app came out. Now, they no longer assign rides to drivers, Foster said.

This leaves the drivers themselves to complete that task, he said.

This quarter, Safe Ride has received about 150 ride requests per night on weekends, with a total number of riders at around 200, Foster said. Many rides comprise two or three students. He added that “combo rides,” in which Safe Ride pairs people from different locations into the same car if they request rides to destinations that are near each other, are difficult to coordinate now.

“Before, that was always done by our dispatchers,” he said. “They would assign rides to the drivers, and they would set up those rides that were actually going within the same direction.”

“It’s wonderful for the University and the fact that it’s going to bring down our emissions,” he said. “It also saves us a ton of money and fuel.”