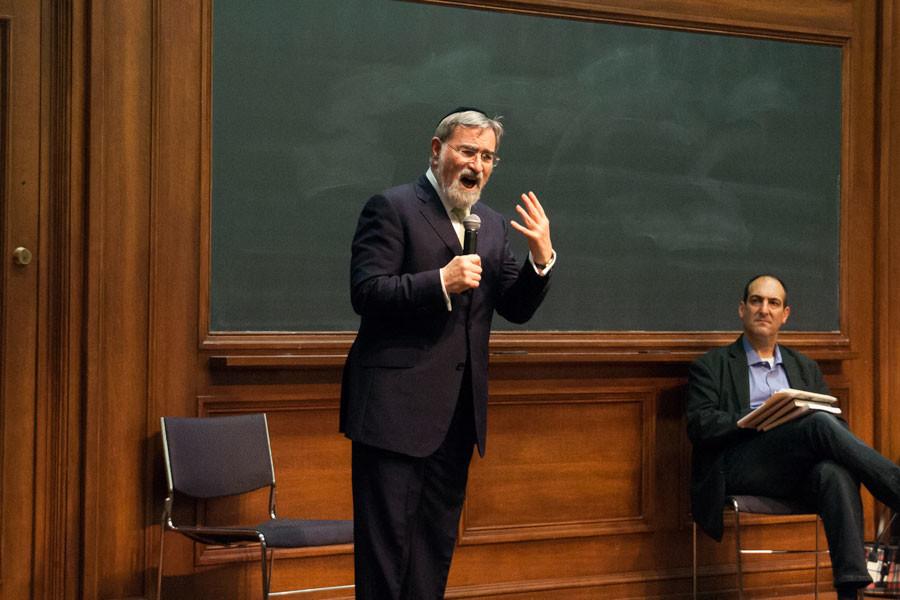 Rabbi Jonathan Sacks addresses students at Harris Hall on Wednesday. Sacks discussed confronting religious violence through tolerance and said people can prevent violence by recognizing that those with different religious beliefs are not enemies.

Rabbi Jonathan Sacks, a religious leader, philosopher and author, spoke Wednesday in Harris Hall to a crowd of more than 200 about confronting modern religious violence.

Sacks, who is currently a professor at New York University and Yeshiva University, has had a long and distinguished career. While serving as the Chief Rabbi of the United Hebrew Congregations of the Commonwealth from 1991-2013, Sacks wrote more than 20 books on various religious topics.

Rabin was murdered by an Israeli extremist who opposed Rabin’s peace talks with Palestinians. Sacks related his death to the theory of dualism, the idea that the world has two powers at work in the universe: God and a figure of evil.

When bad things happen, dualists question who did these terrible things to them and blame different religious groups, Sacks explained. This leads to religious violence, as in Rabin’s case, he said.

“Dualism is quite possibly the most dangerous phenomenon known in the history of humans,” Sacks said.  “We cannot attribute evil to some independent force in the universe.”

Wednesday was Sacks’ first time speaking at Northwestern since 2011, when he discussed his book, “The Dignity of Difference.”

NU Hillel Executive Director Michael Simon said Sacks’ 2011 event was a huge success, and he was thrilled to bring the rabbi back.

“We hosted him four years ago, and it was a pretty large audience of students and community members,” Simon said. “He has a message that resonates beyond a Jewish audience”.

Weinberg senior Romy Bareket said Sacks impacted him as a modern Jew on a college campus.

He said people can prevent violence by recognizing that those with different religious beliefs are not enemies.