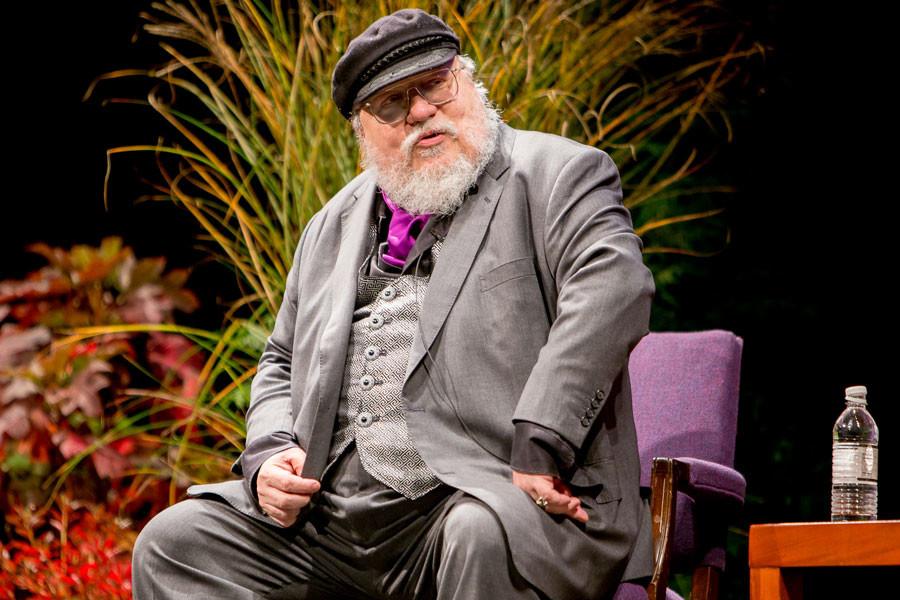 George R.R. Martin talks with the audience about the future of his fantasy series, “A Song of Ice and Fire,” as he participates in a Q&A at Cahn Auditorium. Martin returned to Northwestern on Wednesday to accept a Medill Hall of Achievement award.

“A Song of Ice and Fire” author George R. R. Martin (Medill ‘70, ‘71) returned to his alma mater Wednesday to accept a Hall of Achievement award and engage in a Q&A with Northwestern students and faculty on his bestselling fantasy series.

The event was held at Cahn Auditorium and was moderated by Entertainment Weekly writer Darren Franich, the Asian American Journalists Association’s national vice president for broadcast Niala Boodhoo and Medill sophomore Mariana Alfaro, who is a Daily senior staffer.

The author’s fantasy series, “A Song of Ice and Fire,” was adapted into HBO’s Emmy Award-winning show, “Game of Thrones,” in 2011. Martin has written one episode for each of the show’s first four seasons and works as one of its executive producers.

Martin said “Game of Thrones” is the most viewed show in HBO’s history, and it has gained popularity internationally. The show’s success is related to its universality, he said.

“Swords and kings and dragons and magic — these are legends that are common to many cultures throughout the world,” Martin said. “Virtually every civilization that we know of passed through a period when there were kings and wars.”

The success of “A Song of Ice and Fire” has been an exciting experience for Martin, but writing is not a career for someone who desires a stable lifestyle, he said.

“It is a profession for people who can live with violent reversals of fortune,” Martin said. “It’s hard to get used to, particularly when you’re young.”

Online publications that review “Game of Thrones” on a weekly basis give an incredible level of attention to each episode, Martin said. Although some of the reviews are very perceptive, he said online reviews are generally unbalanced because many great shows do not receive the media attention they deserve.

In addition, Martin said the quality of certain stories he reads online is very low.

“The general quality of Internet journalism, as I experience it more and more, is appalling,” he said. “Whatever journalistic standards I learned here at Medill certainly don’t seem to apply on the Internet anymore.”

Martin discussed the future of science fiction writing and said the genre is currently experiencing a crisis. In the past, when asked about the future, Martin said people’s outlook was very positive. Now, however, people seem to approach the future with pessimism as they discuss topics such as pollution, global warming and nuclear proliferation, he said.

“All of this I think has affected science fiction,” Martin said. “We are afraid of the world of tomorrow.”

Martin also said he thinks stories can contain elements of tragedy and darkness without losing hope.

“Myself, I am attracted to the bittersweet ending,” he said. “People have asked me how ‘Game of Thrones’ is going to end, and I’m not going to tell them the specifics, but I’ve always said to expect something bittersweet.”

In addition, Martin referenced J.R.R. Tolkien’s “The Lord of the Rings” and said Tolkien wrote a brilliant, bittersweet ending to the trilogy.

“When I look at it now, that’s brilliant — it’s brilliant that Frodo never heals,” Martin said. “He won a battle but not for himself. In my mind, these closing chapters elevate ‘The Lord of the Rings’ way above all the fantasies that followed it.”

Graduate student Luke Prestowitz told The Daily he has always been a fan of Martin’s work and thought it would be interesting to go see him in person. Martin’s comment on pessimism and its relation to science fiction was interesting, he said.

“How society has changed, and what the repercussions of that have been — I think that he is able to see that and we are just starting to experience it now,” Prestowitz said.

Earlier in the day, Martin attended a ceremony to accept the Medill Hall of Achievement award. The Hall of Achievement is the school’s highest honor and recognizes Medill alumni whose careers have had a positive impact on their fields. Martin was one of seven alumni honored May 14 during a ceremony at the Chicago History Museum.

Beth Moellers, who manages special projects at Medill, told The Daily in September that Martin was unable to attend the ceremony in May and was therefore invited to NU this November.

At the Hall of Achievement ceremony, Martin spoke about his time in Medill and described how the school influenced his storytelling, said Medill senior Orko Manna, who attended the Q&A session and spoke on a panel during the Hall of Achievement event. Although Manna is pursuing a career in broadcast journalism, he said Martin’s stories about fiction writing were still relatable.

“He was talking about being persistent in whatever field that you go into, and these fields are similar in that it’s really a case by case basis,” Manna said. “You work toward this goal and if something doesn’t go well, it could really affect your career.”