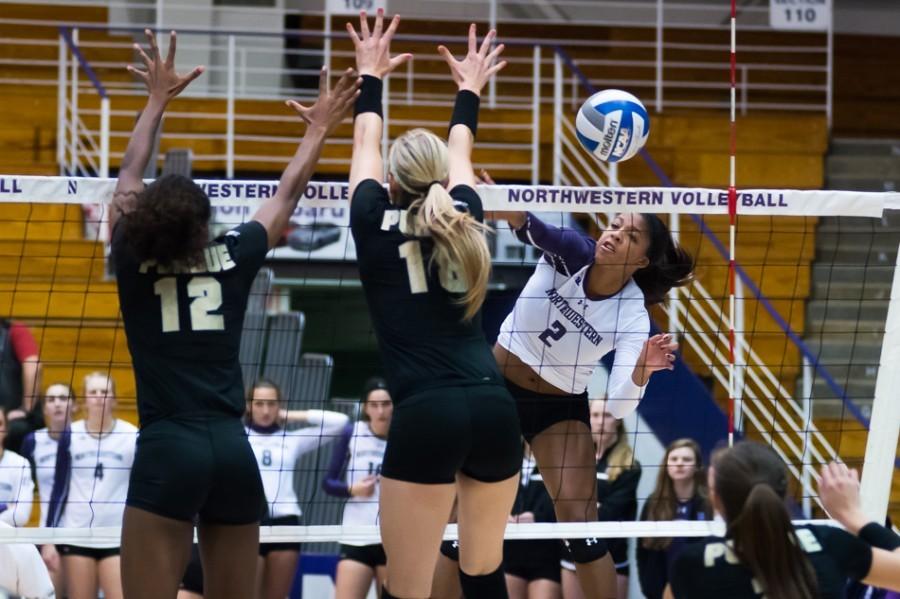 Symone Abbott spikes the ball past two defenders. The sophomore outside hitter has been racking up kills in recent games, including 17 in NU’s victory over Michigan State on Saturday.

Symone Abbott is sick of losing.

After a sluggish start to conference play, the sophomore hitter has notched at least a dozen kills in three of her last five games. Following a 17-kill performance against Michigan State on Saturday, Abbott says Northwestern (13-10, 5-7 Big Ten) is ready for its first winning streak since late September.

“We had more of an expectation (to win) against Michigan than Michigan State, but the loss to Michigan made us realize we really need to win against (the Spartans),”
Abbott said.

The Wildcats have been consistently inconsistent so far this season, and Abbott has exemplified their struggles. Her hitting percentage this year is lower than 2014 when she burst onto the scene as a freshman.

Although her stats have leveled out following her recent strong performances, Abbott was hitting nearly 30 points below her percentage from last season.

“You can see her progressively getting better,” coach Keylor Chan said of Abbott. “Hopefully we can steady out a little bit here.”

Sophomore Gabrielle Hazen has also impressed Chan. After missing a couple weeks with mononucleosis, Hazen is healthy again and has become one of NU’s top defensive options.

With the Cats having the toughest schedule in the country, Hazen says it’s important to focus on defense and manage expectations when playing so many good teams.

“We just go into each game with the mindset of playing the best we can play,” Hazen said. “You can’t really have an ‘off’ night, but even if you do you have to find a better way of managing the lows.”

Wednesday’s match against the Fighting Illini comes after a weekend split of the Wolverines and Spartans. In the last four games between Illinois and the Cats, the home team has won each time.

Not only is the in-state rivalry adding motivation for the upcoming home-and-home, but the Illini are one game ahead of NU in the Big Ten standings, tied with the two Michigan-based teams.

“Everybody likes the classic rivalry games, and you always want to come out on top,” Hazen said. “I feel like we have something to prove that they’re not the top dogs (in Illinois) and we can be the top dogs too.”

Additionally, this is NU’s first Wednesday game since its contest against Minnesota on Sept. 30. Coming off two weekend games, preparation on short rest can be difficult for the Cats’ upcoming 7 p.m. home game.

“We have to modify the training and change up the routine a little bit,” Chan said. “We’ll have a really intense practice and be ready for Illinois.”