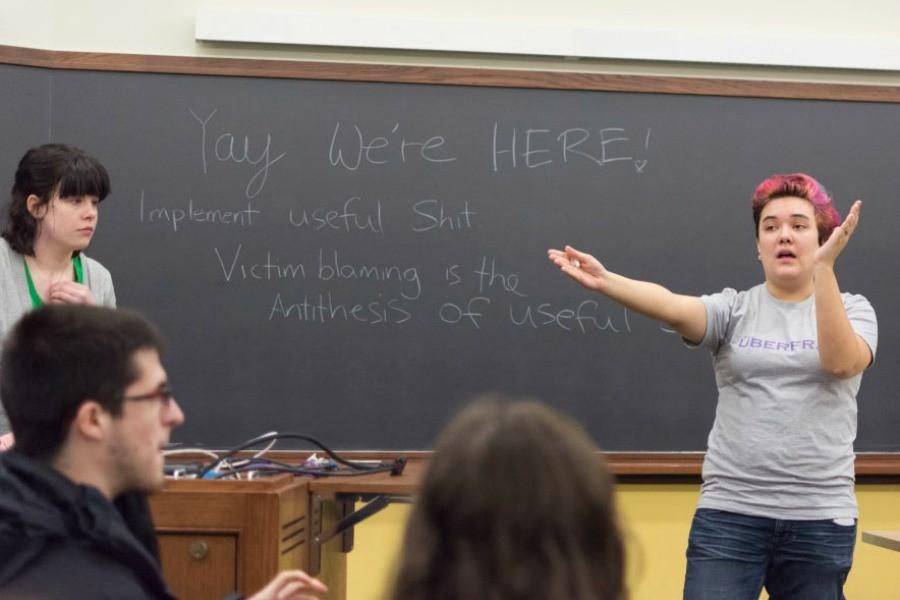 Then-Weinberg juniors Laura Whittenburg and Jazz Stephens meet with other students following a planned sit-in of philosophy Prof. Peter Ludlow’s class in March 2014. Ludlow canceled the class before the sit-in could take place and has not taught since. He resigned Monday.

Ludlow’s resignation came as the University was taking steps to terminate his employment and a faculty committee was considering his case, University spokesman Al Cubbage said.

“Ludlow’s actions violated University policy and are an affront to the standards and expectations that Northwestern University has for its faculty members,” Cubbage said in a statement. “The University regrets the pain that was caused by his actions.”

Cubbage declined to comment on the situation further Tuesday, saying that he could not give any details about the two instances of sexual harassment.

Ludlow has not taught classes at Northwestern since March 2014.

In the past, Ludlow has denied all allegations of sexual assault. He did not respond to a request for comment Tuesday.

The University’s findings that Ludlow violated the school’s sexual misconduct policy came to light in February 2014, when a then-Medill junior filed a Title IX lawsuit against NU. The student, who has since graduated, said in the suit the school responded with “deliberate indifference and retaliation” after she told University officials Ludlow sexually assaulted her in 2012. She said Ludlow took her to a downtown Chicago art show in February 2012, bought her alcohol and ignored her repeated requests to return to Evanston, taking her to his apartment where she lost consciousness. The student said she regained consciousness early the next morning in Ludlow’s bed.

A judge sided in November 2014 with the University’s motion to dismiss the case, ruling that NU “took timely, reasonable, and successful measures” in the aftermath of the student’s report. The University had found Ludlow in violation of the school’s sexual misconduct policy and sanctioned him in several ways, including denying him a raise and prohibiting him from having any contact with the student.

The now-graduated student is in the process of appealing her case to the 7th U.S. Circuit Court of Appeals. Her lawyers declined to comment on Ludlow’s resignation Tuesday.

The graduate student did not immediately respond to a request for comment Tuesday.

In February, a federal judge dismissed Ludlow’s lawsuit, which had argued the University invaded his privacy, defamed him and discriminated against him because of his gender during its investigations of him for sexual misconduct.

Shortly after the first lawsuit was filed, Ludlow canceled a class many students had planned to walk out of in protest of his continued employment. He has not taught at NU since.

Jazz Stephens (Weinberg ’15), who helped organize the protest while she was a student, said she participated in roughly 10 protests in response to Ludlow’s employment and general issues related to sexual violence at NU symbolized by the Ludlow case. She said she was surprised when she learned Ludlow had resigned.

“I’m overwhelmed and gratified and symbolically I think it’s a huge victory,” she said. “But I think there’s still a lot to do.”

This story was updated at 12:41 a.m. on Nov. 4 with additional background information and comments from Jazz Stephens.