Northwestern’s ‘We Will’ campaign raises $2.4 billion in 19 months 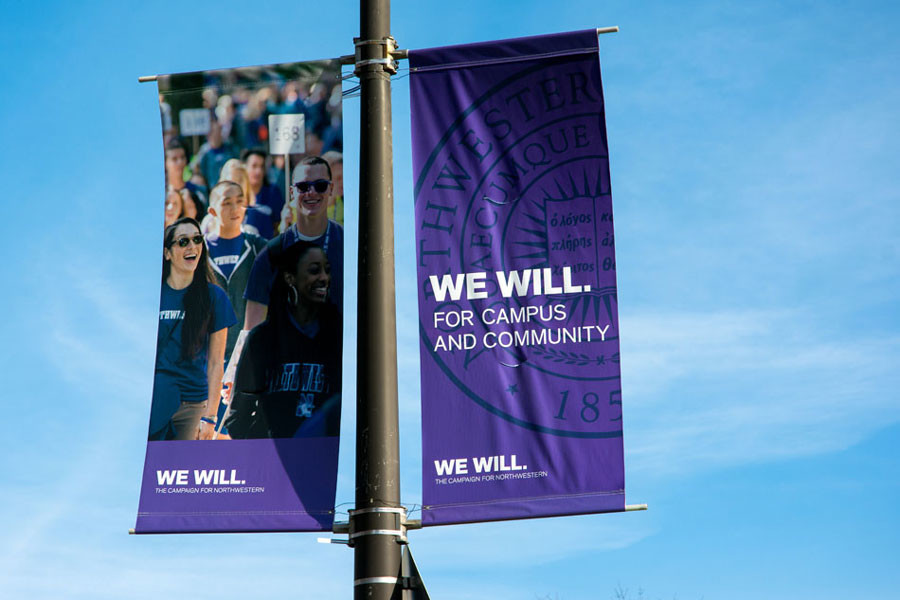 The “We Will” campaign is almost one-third of the way through its five-year course. As of now, the fundraising effort has raised $2.4 billion out of its $3.75 billion goal.

Nearly one-third of the way in, Northwestern’s “We Will” fundraising campaign is ahead of schedule with $2.4 billion raised of its $3.75 billion goal.

“The campaign is so far ahead of where we thought we’d be, and I think it’s having a real impact,” University President Morton Schapiro told The Daily last month.

Schapiro added the campaign resulted in this year’s freshman class having fewer loan packages than the previous year’s class.

“Our goal especially given our financial wealth and our fundraising capacity is making sure that if you can really afford it, you pay a portion of the cost to educate you, but otherwise you just don’t,” he said. “We’re one of the very few schools that meets full need, but only for domestic students, and I’d like to change that.”

The campaign’s success has been fueled by what Bob McQuinn, vice president for alumni relations and development, said is an unprecedented outpouring of donations. The campaign has now been the beneficiary of four gifts exceeding $100 million in the last 12 months: Roberta Buffett Elliott’s (Weinberg ‘54) donation of more than $100 million, Louis Simpson (Weinberg ‘58) and Kimberly Querrey’s total donation of $117.8 million, J.B Pritzker (Law ‘93) and M.K. Pritzker’s $100 million gift, and Patrick G. Ryan (Kellogg ‘59) and Shirley W. Ryan’s (Weinberg ‘61) total contributions through “We Will” of more than $100 million.

Since Elliott’s gift, the Buffett Institute for Global Studies launched an annual global leadership award that offers a $10,000 award to a young individual for outstanding leadership in global health, social or economic development, human rights, climate change and food security, said Bruce Carruthers, director of the Buffett Institute. The gift has also funded graduate-level research travel and research groups for faculty and graduate students that will support multi-year and multi-disciplinary collaborative research.

A portion of Elliott’s gift is earmarked for recruitment of international students and to provide more of these students with financial aid, Carruthers said.

“(International financial aid) is one of the ways we can enrich educational experiences, not just of the students, but of teachers by having a globally diverse and representative undergraduate body,” Carruthers said. ”It’s great for the classroom to have a broad spectrum of experiences and understandings.”

McQuinn said the campaign is looking to further support all students, not just international students, regardless of their financial circumstances. Under Schapiro, NU has continuously increased funding for graduate- and undergraduate-level financial aid.

“If we didn’t have an ample amount of scholarship funding, we’d look completely different than we do today,” McQuinn said.

Donations to the campaign have and are continuing to fund construction projects on campus such as the new Ryan Center for the Musical Arts, a new workspace called The Garage, the planned Lakefront Athletics and Recreation Complex, and the Kellogg Global Hub — a lakeside building for the Kellogg School of Management and the economics department.

McQuinn said raising the funds to construct these facilities is only the beginning of the University’s plan to improve student experience.

“The funding really just provides the resource base,” McQuinn said. “The real achievement comes once we have put together the faculty, students and staff to realize the ambitions.”

Through two separate gifts in 2014 and 2015, Simpson and Querrey’s total contributions of $117.8 million — the largest sum donated to the campaign so far — are now funding the Feinberg School of Medicine’s biomedical research programs and the construction of the Louis A. Simpson and Kimberly K. Querrey Biomedical Research Center. McQuinn said around 20 summer research opportunities have been made available for undergraduate students as a result of the donation.

“(Research grants) allow us to bring to Northwestern the most talented faculty working in some of the most interesting areas of science and then to benefit the undergraduates by having mentors and providing work experiences that might shape their careers,” McQuinn said.

NU plans to continue expanding its number of donors in hopes of reaching 141,000 to build a stronger philanthropic base for the University. As of Sept. 30, the campaign was at just under 109,000 donations, McQuinn said.

McQuinn said the campaign has been successful at attracting donors due to the positive attention NU has received for its rankings, excellent student body and faculty.

“There’s both a vision and a means to support that vision,” McQuinn said. “We have the momentum of the prominence of the University.”

The impact of this campaign has also fostered an enormous community of NU alumni around the world who will be accessible to others within the community in the future, McQuinn said.

“For the university educational experience to be maximized, it goes well beyond generating value from the time you’re on the Northwestern campus,” McQuinn said. “The better we can keep the community focused on the future of the university, I think the easier it’ll be … to shape your own future.”

Correction: A previous version of this story misstated the target of a $92 million donation. It went to the Louis A. Simpson and Kimberly K. Querrey Biomedical Research Center. The Daily regrets the error.