Dining policies not affected by recent WHO meat report 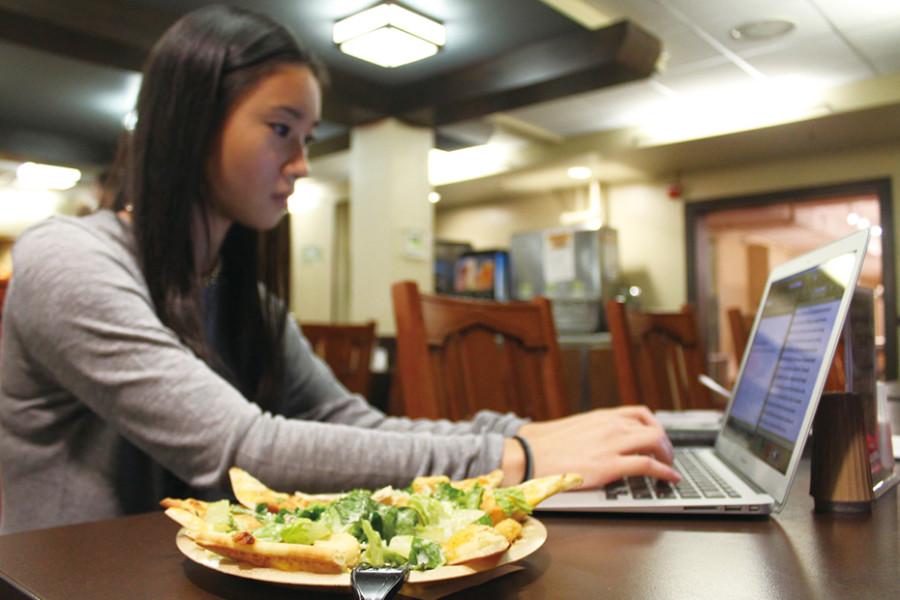 A Northwestern student dines at Fran’s Cafe. Sodexo has said there are currently no plans to take action regarding last week’s health report that there is a link between processed meat and cancer.

Sodexo currently has no plans to change policies in response to a report released Oct. 26 linking certain meats to cancer, a Sodexo spokeswoman said.

Last week, the World Health Organization released a report linking processed meats to cancer. Despite the report, Sodexo has not recalled products in response to the study as of Friday, said Rachel Tilghman, Sodexo’s director of communications and engagement at NU.

Regular consumption of processed meats, including bacon, hot dogs and sausages, can cause colorectal cancer, according to the report. The WHO classified processed meats as Group 1, meaning they are “carcinogenic to humans.” Although this is in the same group as tobacco smoking and asbestos, the WHO said this does not mean they are equally carcinogenic. It also classified red meats in Group 2A, meaning they are “probably carcinogenic to humans.”

Although Sodexo has not responded to the study, Tilghman said there are two main ways that policies get changed in dining halls: through a corporate directive or through an on-campus initiative.

“If it’s a policy that the University or our director of dining or our program and our student groups here would like to change, we can also change it,” she said last week. “No one has brought any changes to our team as of this week that I’m aware of.”

Karen Sechowski, NU’s campus dietitian who started in June, said there have not been any discussions about potential changes in response to the studies. However, students should always be mindful of their eating habits in the dining hall, she said.

“At some point in your life, you need to learn how to make these choices,” she told The Daily last week. “If you hear something like that from a reputable source like the World Health Organization, students should make good choices accordingly.”

Real Food at NU co-director Miranda Cawley said she is not sure how effective the study will be in changing any policies or eating habits. She compared the report to other reports on high fructose corn syrup having negative health effects, which have caused minimal to no changes in people’s eating habits.

“There’ve been reports coming out for ages about different foods that allegedly give you certain type of cancers, and they continue to be served in dining halls,” the Medill senior said. “Just because reports are coming out that say things are unhealthy does not mean that there’s going to be anything necessarily that we’re seeing in changes in diet, in policy or availability in dining halls.”

For change to occur, Cawley said things need to take place on a larger scale. Because a lot of consumer options are dictated by the food industry, she said it is not likely for NU to respond quickly, if at all, to the report.

“It would be great if Northwestern, using this information, stopped serving as much red meat and processed meat,” she said. “But given how complicated the food system is, it’s unlikely the University will be able to respond with that kind of immediacy.”

However, for students who are worried about the reports, Tilghman said they are welcome to speak to dining hall managers for options outside of what is being offered.

“Students are empowered to make personal choices when it comes to their health when dining both on and off campus,” she said in an email to The Daily. “If a student has concerns, they are welcome to bring them to the managers at the location where they are eating.”