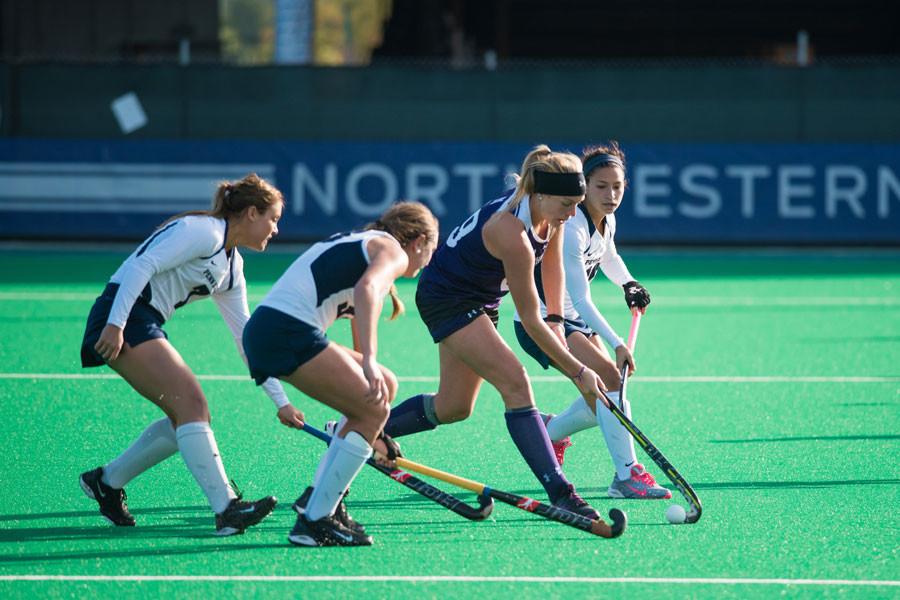 Lena Phillips escapes a crowd of defenders. The senior's lone shot attempt didn't find the back of the net in the Cats' 3-2 home defeat.

One shot went off the post. A penalty shot was saved. Shots went off feet, sticks and masks. Not enough Northwestern shots went in, however.

“It’s disappointing,” coach Tracey Fuchs said. “We had a lot of seniors out there who played their hearts out.”

After falling behind 3-1 early in the second half, the Cats turned up the pressure. Freshman forward Eva van Agt failed to nudge the ball past Penn State goalkeeper Jenny Rizzo from close range, and a minute later both junior midfielder Isabel Flens and senior midfielder Lena Phillips saw shots knocked away by Rizzo.

In the final 10 minutes, NU saw two golden opportunities fall by the wayside. Junior midfielder Dominique Masters had a sliver of open net to aim for, but her shot ricocheted off the post and out of danger. Just a moment later, senior back Lisa McCarthy stepped up to take a penalty shot, but Rizzo guessed correctly and brushed the shot aside.

Masters scored a consolation goal from a penalty corner with no time remaining.

“Everyone’s doing everything right, (I’m) trying to get something on cage,” Masters said. “The angle of the ball was just not quite right. The post was in the way I guess. It’s annoying but at the same time … we hit the keeper plenty of times.”

The Cats found themselves chasing the game after going down 2-0 midway through the first half. Penn State forward Brooke Birosik pounced on a rebound in front of the net in the seventh minute to open the scoring, and she doubled her tally fewer than 11 minutes later with a close range finish after a cross from midfielder Aurelia Meijer.

Trailing on its home field, NU found a spark through Masters. With seven minutes remaining in the half, a loose ball fell to her, and she found the back of the net.

“I was just in the right place at the right time I think,” Masters said. “We’re going to get lots of rebounds, so we’ve got to get ready for anything and just putting anything on goal.”

The Cats drew no closer, however, despite 14 second half shots. Penn State had just one shot in the second half, but Birosik made it count, completing her hat trick in the 46th minute.

In stark contrast to recent NU opponents, the Nittany Lions created more than enough opportunities to score three goals. The visitors had seven shots on goal in the first half, and finished with six penalty corners.

The next week is critical for the Cats, as their next loss will most likely end their season. NU, the No. 4 seed in the Big Ten Tournament, will meet fifth-seeded Ohio State at 9 a.m. on Thursday in Bloomington, Indiana. The Cats defeated the Buckeyes 2-0 on Oct. 23.

For Fuchs, however, there is no panic as NU enters the postseason.

“They just put their chances in and we didn’t. Unfortunately that’s been the story of our season,” she said. “We have three days to figure it out. We know our path to the NCAA (tournament) is through the Big Ten Tournament, so we certainly have the capability to do it. We just have to prove it on the field and stop talking about it.”

This post was updated at 9:49 p.m. on Nov. 1 to include the Cats’ opponent in the first round of the Big Ten Tournament.