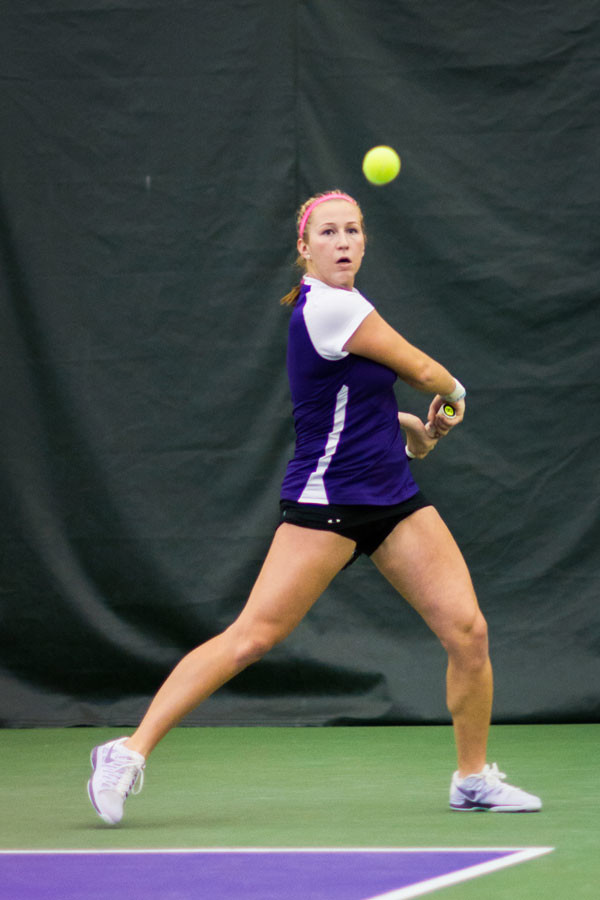 Maddie Lipp takes aim for a return. After missing all of last season, the redshirt sophomore is now fully healthy and already turning in solid performances.

Fall is a time for apple pies, pumpkin picking, raking leaves and, for Northwestern, hard training.

“We spend a lot of time on what we saw, what we learned, what things we need to be aware of,” coach Claire Pollard said. “I love the commitment from the girls, the focus and emphasis on fitness.”

That commitment and focus translates directly onto the court, where the Wildcats are getting a first glimpse at conference opponents. This past weekend in Ann Arbor, six of nine players on the team competed in the Midwest Regional Championships. Redshirt sophomore Maddie Lipp had another “exceptional” outing, reaching the singles final. Even though Lipp was defeated, she’s gotten her old swagger back.

“She’s really committed to working on her game at a higher, more intense level,” Pollard said. “If you do that, you almost always get positive results. The commitment is at a slightly higher level than most college tennis players. She’s got herself back into the mindset … that she had before she got injured.”

Lipp suffered a season-long injury that kept her off the court through her true sophomore year. In her freshman season, Lipp had a winning record across the board in overall singles and doubles play. With her performance this fall, she’s on track to dominate with deep runs into tournaments against some of the best competition college tennis can offer.

This fall season gives NU a good look at conference competition too. Over the weekend, the Cats saw opponents from Michigan, Illinois, Ohio State and other Big Ten schools. Traditionally, the conference is highly competitive in women’s tennis and the end-of-season tournament is anybody’s to take.

One major factor in keeping up with competition is health. Pollard recognizes the importance of keeping players healthy, especially after going through last season with only six to seven players at any given time instead of all nine on the roster. With the full lineup ready this year, Pollard is excited about NU’s future.

“It’s an opportunity,” Pollard said. “All of those teams are very good. We get 100 percent healthy, I think we’ll have one of the greatest teams I’ve ever had here.”

The fall is about individual development as well. Many tournaments will have singles and doubles competitions where scoring is among the athletes, not between teams. Sophomore Erin Larner is a prime example.

Last year, Larner jumped out of the gate and competed at the No. 2 singles spot. Pollard said Larner has not gotten a great amount of exposure so far this fall, but she still did well in Ann Arbor.

“The bar was really high (this weekend),” Pollard said. “I think Erin for having played such little tennis this fall, for her first competition, it was good.”

With players like Lipp and Larner on the rise within Pollard’s program, the Cats will be in position to take back their Big Ten title.

“I thought it was interesting to see all the competition,” Larner said. “It was a way to see that everyone else is working hard, as hard as us. There’s a lot of good players out there. It was good to get back out there and get playing again too.”